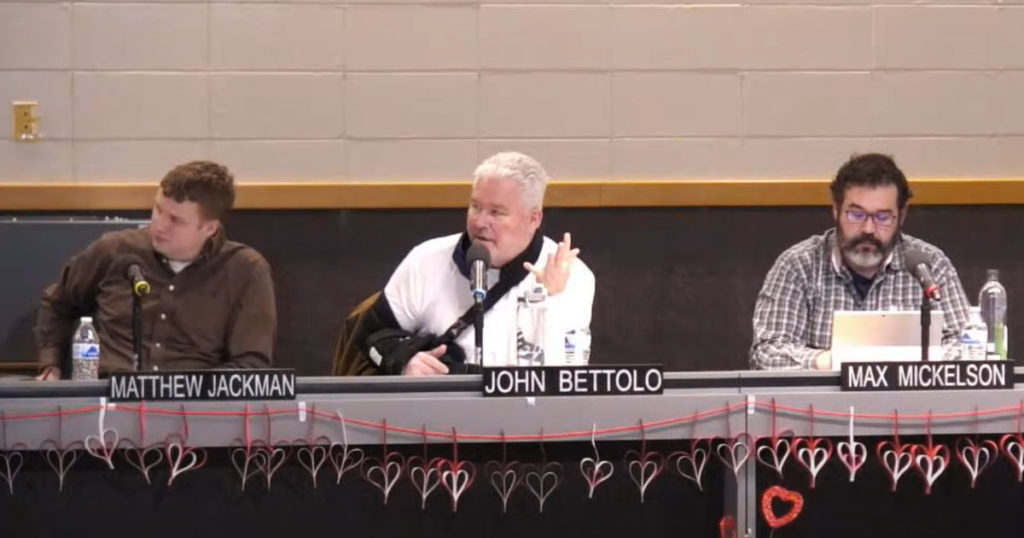 School board members Matt Jackman, John Bettolo and Max Mickelson engage the SCSD No. 1 principals in the discussion about high school graduation rates.

ROCK SPRINGS — Graduation rates at Rock Springs High School consumed much of the discussion at the Sweetwater County School District No. 1 Monday night.

Rock Springs High School Principal Glen Suppes told the board that the projected graduation rate for the 2022-2023 school year is 79%. While the graduation rate at RSHS dropped by about 3.5% from 2020 to 2021, the 2023 projection is an improvement of about six percent from last year.

Suppes said 60 students have dropped out of the current senior class which also contributes to the graduation totals.

“That’s a lot of kids when you’re looking at about 286, 287 students,” Suppes said. “But I’ll be coming back to the board with a more comprehensive plan about what we can do to improve that 79%.”

He also said placement is a big factor in the number of students graduating from RSHS. Placement can be anything from transfers out of the district to students leaving school for legal or mental health reasons.

Black Butte High School Principal Bryant Blake reported that the graduation rate at his school spiked almost 23% from 2020 to 2021. He attributed part of the successful increase to improved attendance and the dedication of his staff to maintain consistent support for students.

Meetings with parents and students to address attendance concerns and creating individual plans of support has helped build a successful program at the school, Blake said.

Credit recapture was a new program implemented at BBHS last year that allowed students to earn back a credit in the second semester if they failed the class in the fall. Hiring a graduation coach was also instrumental in the graduation rate improvement and Black Butte.

“The graduation coach would work one-on-one with these kids. She would come to your house, she would make sure you were in school, but most importantly she would provide the academic support,” he said. “Sometimes it was a little tough love, but that’s what some of those kids needed.”

Farson High School graduated 18 seniors last year which reflected a 100% success rate, said FEHS Principal Barbara Rezzonico. In fact, FEHS has graduated 100% of its students with standard diplomas every year since 2016. Twelve seniors are on track to graduate in 2022, Rezzonico said.

Next Steps Toward Improved Graduation Rates

Trustee John Bettolo expressed his concerns about the graduation rates at Rock Springs High School following the presentation by the principals calling the top his “passion.”

Bettolo suggested SCSD No. 1 seek support from the National Center for School Engagement (NCSE) to address the graduation issues that RSHS. He said the district could use a school-based assessment through this center to address graduation concerns for a one-time fee of $75.

I happen to believe when students feel like they are part of a school they don’t leave. When our rules match a more modern look at discipline, we don’t end up disciplining kids out of school and we support them through situations.

Suppes said he and his staff are in the process of gathering data and developing a plan to present to the board in April about improving graduation rates. He also said a meeting in the summer would be helpful as incoming freshmen data could be examined along with the information from NCSE.

“I just want to make a commitment as a board to this as an issue. That’s what I want more than anything,” Bettolo said. “Why did the kids who didn’t graduate last year not graduate?”

The board unanimously approved a motion by Bettolo to hold a workshop following Suppes’ April presentation in an effort to thoroughly study RSHS graduation issues and plans for improvement.