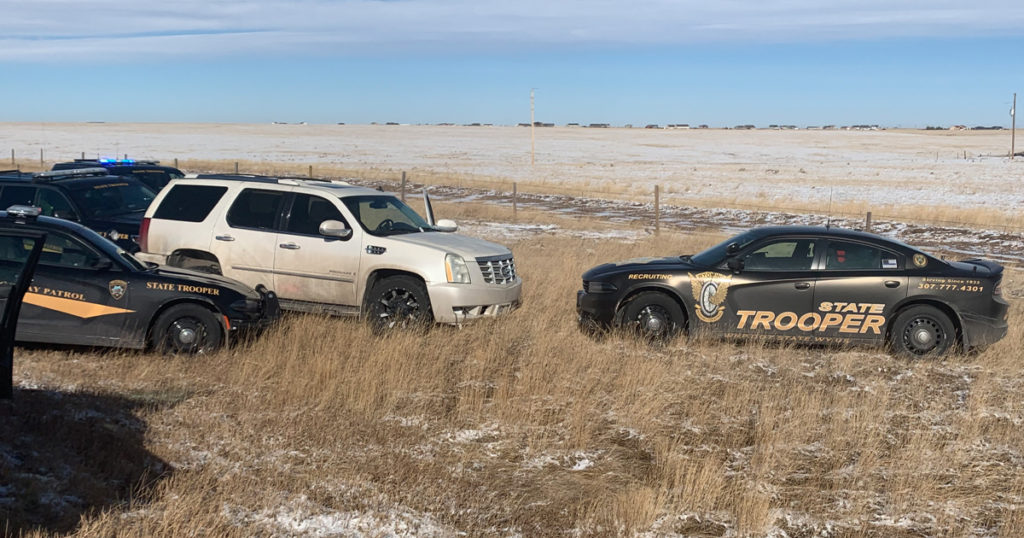 A 42-year-old Greeley, CO man is in custody this evening after leading law enforcement officers on a high-speed chase through Cheyenne today.

CHEYENNE — A Wyoming Highway Patrol pursuit ended in the arrest of a Greeley man in Cheyenne this afternoon.

According to a WHP report, troopers were notified of a 2007 Cadillac Escalade driving erratically in the area of Campstool Road and Interstate 80. The plate given matched a reported stolen vehicle out of Greeley, Colorado.

Shortly after 1 p.m., a WHP Trooper on Vandehei Avenue and Interstate 25 found this vehicle. As the troopers attempted to stop the stolen Cadillac, the driver failed to stop and tossed a handgun out the window.

The vehicle entered Interstate 25 from Vandehei Avenue and drove south where troopers were able to deploy spike strips to deflate the Cadillac’s tires. After striking the spike strips, the driver exited onto Missile Drive and drove east towards Cheyenne.

In the interest of public safety, the trooper attempted a Tactical Vehicle Intervention (TVI) maneuver to stop the vehicle but was unsuccessful. The Cheyenne Police Department took over as the primary pursuing agency while the pursuit continued on city streets. The WHP resumed primary pursuing agency as the stolen vehicle drove south on South Greeley Highway.

The suspect driver drove into oncoming lanes of traffic as he continued to drive south on US 85. Around milepost 1.5 on US 85, troopers attempted a second TVI to end the pursuit. The vehicle exited the left side of the roadway and came to a stop.

The driver of the vehicle was taken into custody without further incident and identified as a 42-year-old Greeley, Colorado resident Farrel Williams.

Williams was charged with possession of the stolen vehicle, felony warrant for a parole violation out of Colorado, fleeing to elude, reckless in endangering, and other traffic-related offenses.

The Cheyenne Police Department and Laramie County Sheriff’s Department assisted with this incident.