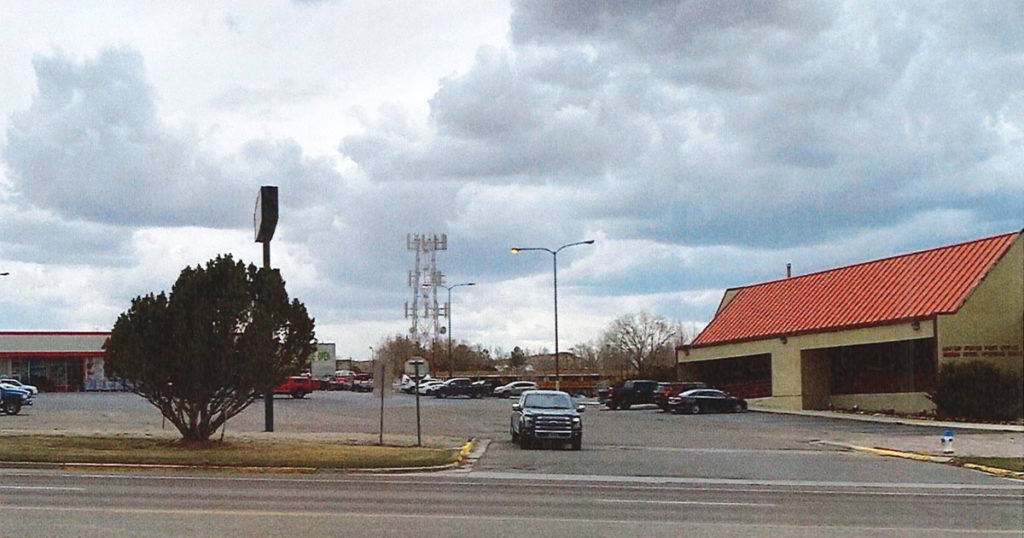 Union Wireless provided this mock up image to show where the cell tower will be located and how it will look from Uinta Drive. Courtesy photo

GREEN RIVER — After a lot of discussion, the Green River City Council voted 5-2 Tuesday night to approve a Special Use Permit for Union Telephone Company to build an 80-foot cell tower on Uinta Drive.

Mayor Pete Rust and Councilman Jim Zimmerman were the two votes against the Special Use Permit, while Councilors Robert Berg, Mike Shutran, Sherry Bushman, George Jost, and Gary Killpack voted in favor. The Council previously tabled the resolution to provide time for the community to express opinions.

The tower will be located at 380 Uinta Drive, which Union employee Tyler Tholl said is the ideal location for the tower due to its proximity to the Hutton Heights area.

The primary purpose of the tower is to deploy FirstNet, a first responder network. Green River Police Chief Tom Jarvie said FirstNet ensures that first responders will be prioritized in the case of emergencies or outages so public safety professionals can continue doing their jobs.

Tholl said Union was approached by AT&T to build the tower so the company can use it for the first responder network. Chief Jarvie added that better connectivity will also allow more people to send photos and videos to dispatch, as well as possibly allow body-cam footage to be seen live by other officers.

Though the first responder network could be deployed using multiple smaller towers throughout town, Tholl said the 80-foot lattice type tower is the most efficient and cost-effective way to do so.

There were three residents who spoke against the tower at the meeting, in which the primary concern had to do with the aesthetics of the tower. Dennis Laughlin, owner and manager at Harley Davidson, said he did not want the tower to be built due to it being “ugly”.

“I think an 80-foot tower in the middle of town is a damn ugly idea,” Laughlin said.

Amanda Shepard, who was in attendance at the July 7 meeting when this agenda item was first presented to the Council, once again spoke against the tower. She said she was concerned about the beautification of the town, but also about possible health risks the tower could present.

“I’m concerned about everybody,” Shepard said.

Councilman Killpack said he received about 25 to 30 emails and calls regarding the cell tower, and that only three were against the tower. He said that without technology, the city will not move forward and progress.

“Does Green River want to grow? Or do want to stay the way we are?” He asked.

However, Mayor Rust said this issue is not one of technology and advancement, but rather location. He said Union could place smaller towers throughout town instead of an 80-foot tower on Uinta Drive.

“This is a location issue,” Mayor Rust said.

Councilman Shutran pointed out that multiple towers that are just 30 feet shorter than the proposed tower could be even more “intrusive” to the community.

Councilwoman Bushman also said she received overwhelming support for the tower on a poll she put on her Facebook page. Meanwhile, Councilman Zimmerman said all of the constituents he spoke to in Ward I were against the tower.

The Council voted to approve the Special Use Permit, but noted that it was not an easy decision, and they understand that not everyone is going to be happy with their vote.

“It’s not an easy vote to take,” Councilman Jost said.