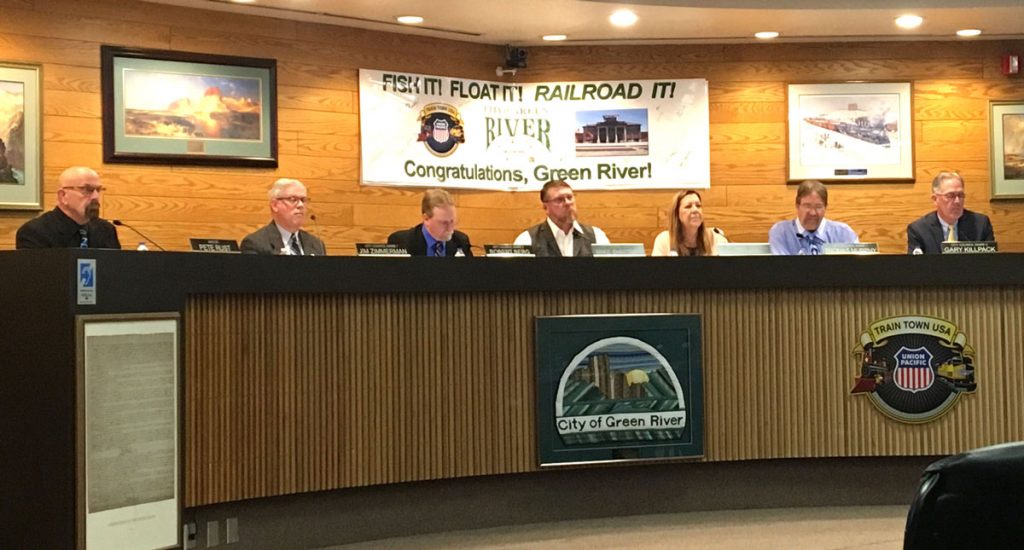 GREEN RIVER– The Green River City Council discussed in a workshop Tuesday night their options regarding projects for the sixth penny tax.

With massive cuts in federal funding for projects, funding for capital projects has become increasingly difficult to come by.

A sixth penny tax must be specific to capital construction projects, not used for governmental operations.

To decide on projects, the county, cities, and towns have been hosting public meetings to discuss ideas. The Special Purpose Tax committee works with the entities at these meetings to help determine the final list of ballot items.

According to Reed Clevenger, Green River City Administrator, $156 million was raised through the sixth penny tax in 2006 alone.

Possible projects the City of Green River is looking at for the tax includes both infrastructure and quality of life projects, including:

Other Factors to Discuss

Along with deciding which projects they want to try to get funded with a sixth penny tax, the council also has to decide how many years they want to tax to last, which the Sweetwater County Commissioners have the final say on. The last few ballots were for four year taxes.

The council also has to decide if they want to present the projects separately or as a one ballot initiative, in which all the projects pass or none of them do.

Clevenger used Albany County as an example of a one ballot initiative sixth penny tax that was favored by the county’s residents.

In August 2019, Albany County passed a one ballot initiative with 85 percent of the vote. The $65 million tax will fund capital projects related to streets, parks, water infrastructure, county roads, and the airport.

The tax was initially implemented in 2010 and was supposed to be done in the first quarter of 2019. However, instead of letting it lapse, they decided on new projects and the community voted to continue it.

The $65 million worth of projects is expected to have a 10-12 year pay back, and the residents still chose to pass it.

The last sixth penny tax implemented in Sweetwater County was for four years, and the County Commissioners chose to let it lapse, according to Clevenger. He added that by letting the sixth penny lapse, the City of Green River lost about $3-4 million in funding. That money could have allowed the City to reconstruct River View Drive, a high priority street.

Clevenger said the city has to get away from simply repairing roads, as the roads are reaching their life span and several are in need of full reconstruction. The sixth penny tax provides funding that could cover the cost of reconstructing roads such as River View.

Even if the City put aside $5,000 each year in a sinking fund, it would take 10 years to raise enough money to rebuild River View, at the price its at now.

Clevenger said it sounds like the commissioners are looking at five to six year tax, so the City has to prioritize and decide which projects are most important and can be completed in that time frame.

Public Works Director, Mark Westenskow, said when looking at road projects, the City has to decide how many they can get done in that time frame. For total reconstructions, he said they have to look at the waterline too because they don’t want to leave an old waterline under a new street.

Since reconstructing a road is more costly than overlaying, Councilman Gary Killpack said the City should consider overlaying more streets rather than reconstructing, at least for the meantime, to show residents work is being done.

“How would citizens feel if you get say $15 million for reconstruction of streets, and you fix two streets, and then we have 35 streets that are falling apart. Do you think the public would re-vote the next time for sixth penny? Or would it be better to go in and do more overlays than reconstructions, at least for now, because if we don’t do something that we can show the public that it’s to their benefit, we would run the risk to get the sixth penny the next time,” Killpack said.

Westenskow explained that many of the streets in Green River were built around the same time in the 1970s and 80s, and they are getting to the point where overlay is not enough.

“They’re getting to the point where overlay is not an efficient use of dollars because they’re just going to fall apart because there’s nothing under them,” Westenskow said.

The council also expressed concerns that they’re control is limited whereas the county commissioners hold the power.

“If the county comes back and says they’re gonna do four years, that’s gonna limit what we can and can’t do,” Killpack said. “Aren’t we at their mercy? We don’t decide how much money we get, the county decides.”

Green River Finance Director, Chris Meats, said that the county does set what goes on the ballot, but there is, “a lot of give and take and push and pull”.

The cities and towns have to approve the resolutions by 2/3, and if they don’t then no projects get put on the ballot.

“The entities have to make compromises for the better good of the community. There is some give or take, so it’s not just they’re dictating to us what we can do, but they do have the upper hand in this process,” Meats said.

Mayor Pete Rust said that while some commissioners have expressed a conservative view for the tax, others have said they think the voters should decide.

“If you put everything out there and let the voters decide, the issue would be whether they would vote all the projects as a group or not, which I quite frankly don’t think they’ll go for that, but it’s worked in other communities,” Rust said.

In addition to Albany County, Carbon County recently passed a one ballot initiative in which 76 percent of the voters were in favor. That tax has a 15-16 year pay back expectancy.

“The reason why it’s worked, I’m guessing, is because all the communities worked together. All of them put in and said, ‘hey this is important for every one of us,’ whether it was a city, town, or county project. They were all willing to group together and all of the people within that jurisdiction said ‘we support it’. That’s what happened in those areas,” Rust said.

The council decided to take a week to think over their options and speak with constituents. They will host a workshop on Tuesday, September 24, where they will further discuss the sixth penny projects.

The workshop will be hosted at Green River City Hall at 6:30 pm.