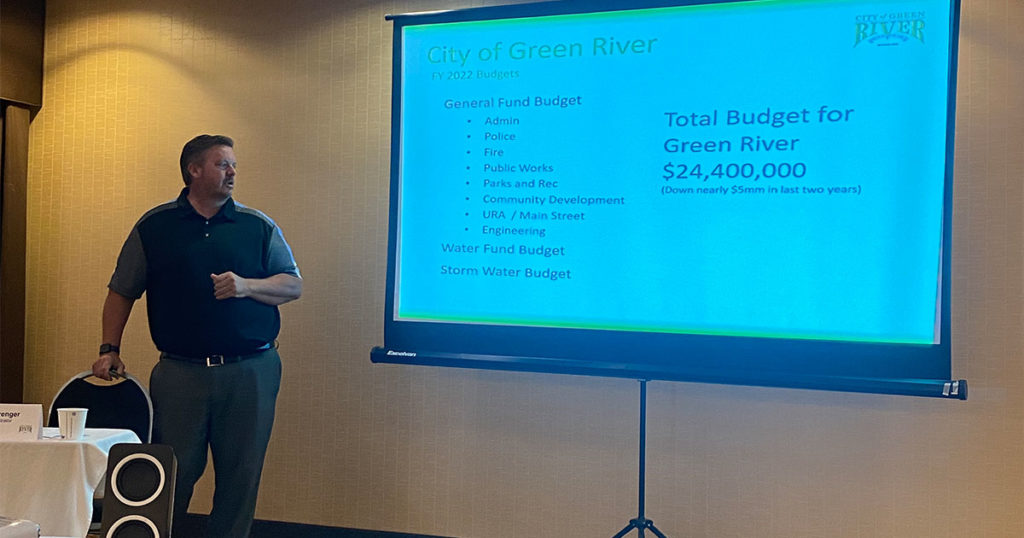 Green River City Administrator Reed Clevenger gives a presentation on the city's budget and sales tax revenues during the State of The City Address Wednesday. Photo by Dave Arambel

GREEN RIVER – Green River City Administrator Reed Clevenger is hoping to see a positive trend in sales tax revenues during Fiscal Year 2022 after last year’s revenues slipped to their lowest since around 2004 due to the COVID-19 Coronavirus pandemic.

Green River city officials presented the State of the City address during the Green River Chamber of Commerce Lunch and Learn this week in which Clevenger addressed the city budget and sales tax revenues.

The total general fund budget is about $24.4 million for FY22, which is down about $5 million in the last two years. The general fund budget includes administration, police, fire, public works, parks and recreation, community development, URA/Main Street, and engineering.

He noted that collections in the first month of FY2022 were lower than any month since 2003. However, collections so far this fiscal year are about $2.3 million, with a collection of $838,130 in September. Clevenger noted that one month is not a trend, but they hope to see more numbers like the September collection.

The three months of collections for FY2022 are above the forecast as of now, he said.

Beyond the pandemic, another factor contributing to the loss of sales tax revenues is the population drop reflected in the most recent census. Clevenger said they are expecting a .54 percent drop in population, which equates to about $350,000, or about $30,000 a month.

With inflation continuing to trend upward, sales tax revenues were already not high enough to stay in line with the trend. The City is hopeful that it will return to pre-pandemic sales tax revenues this fiscal year. However, budgets in the future will continue to see cuts due to expenses that continue to increase.

Ryan Rust, Green River Government Affairs and Grant Manager, spoke briefly about the 1 percent general-purpose tax proposition that voters will see on the November 2 special election ballot. This tax initiative is a public safety and economic development tax that would help to fund services within those areas.

The local governments funded emergency services and public safety over $36.6 million a year in FY2021. Using data from FY2021, Rust said this tax would cover one-third of public safety costs, or about $13 million, and about $4.35 million would go toward economic development.

The hope for this tax would be that it cuts down the amount of funds going toward these services in the general fund budget, allowing that money to go towards other areas within the city and county.

A more in-depth conversation on this tax will take place at the next Chamber of Commerce Lunch and Learn on October 20.