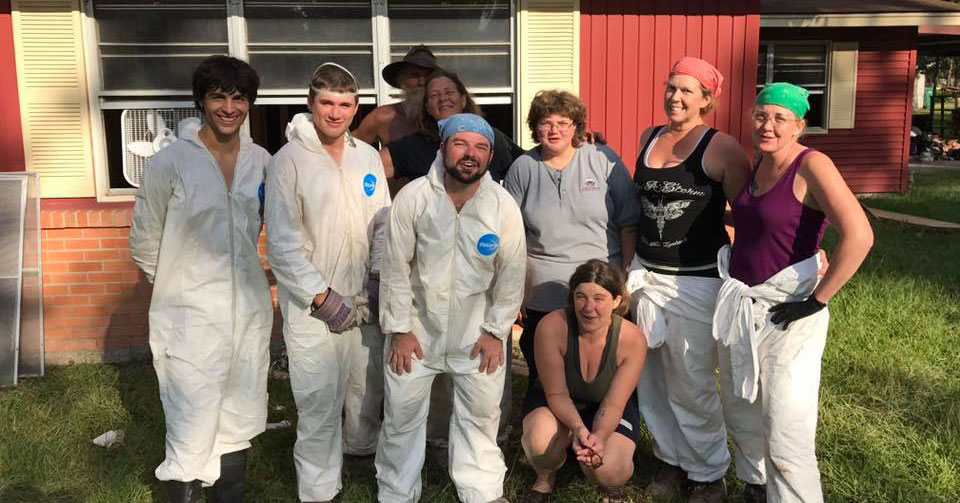 GREEN RIVER– When Green River resident Laurissa Lee started checking into the Houston area after Hurricane Harvey hit, she felt the need to offer her help and support to those affected.

Lee volunteered to go to Port Arthur and Orange, Texas to provide hurricane relief by cleaning up disaster areas. She started her volunteer work in Texas, boots on the ground, on October 2, and stayed for a week until October 9.

“It was hard. It was emotionally and physically draining,” Lee said of the experience. “And for me to be able to go and help was probably one of the best experiences I could have hoped for.”

How Lee Got Involved

“I didn’t realize how many family and friends I had down there until I started checking on them,” Lee said. Although most of her friends and family were not hit by the hurricane, she did have two friends who were affected.

“I thought, I should do something,” she said.

Though she wanted to find a way to help those affected by the hurricane in Texas, Lee said where she ended up was a complete accident.

Lee has a friend who is a volunteer at a fire department in the Houston area, and this friend was helping with hurricane relief.

“She put me on with some Facebook sites that were Hurricane Harvey relief sites,” Lee said.

Lee started talking to a woman on Facebook who was interested in getting a bunch of women to go down and help, and this woman hooked Lee up with the Cajun Army.

The Cajun Army is a group of volunteers who help clean up destruction of homes due to hurricanes. The group is an expansion of the Cajun Navy, a group of people who helped victims of Hurricane Katrina in 2005, by using their own boats to travel across the flooded areas to rescue people.

According to the Cajun Army’s website, their mission is, “to connect the needs of the community with those willing to serve and provide a trusted place where information can be shared and acquired.”

Hurricane victims can request assistance from the Cajun Army, and the Cajun Army will send volunteers in to help clean up and gut houses.

The Cajun Army relies on volunteers, and instead of asking for money, they ask people to donate items by referring them to their website, in which there are Wish Lists for the items the Cajun Army needs to be able to provide their services.

“All of their supplies are donated. The tools, water, the Gatorade we drank,” Lee said. “They don’t ask for stuff like that, it’s just whoever feels like giving.”


Lee Thanks the Community for Donations

Before heading off to Texas, Lee made a Facebook post letting her friends and family know she would be traveling to Texas to help with hurricane relief. She said if anyone wanted to donate items, she would bring them with her when she left.

Cari Kragovich, Director of Human Resources for the City of Green River, saw the post and helped set up two drop off locations for the donations. One location was at Green River City Hall, and the other was at the recreation center.

“We have a pretty amazing community when it comes to helping people,” Lee said. Lee sincerely thanks everyone who generously donated items to the victims of Hurricane Harvey. She says that anyone who does a good deed, expecting nothing in return, is her hero.

“I Just Wanted to Do Something”

Though Lee has done volunteer work a few times throughout her life, whether at the hospital, or with the schools while her daughters were growing up, she had never done anything on this scale before.

However, with her kids all grown up, she found that now was the time for her to commit to volunteer work like this.

“I just wanted to do something, and I’m at a point in my life where I could go and do something, so instead of staying home saying I wish, I just packed up and left,” Lee said.

“When I first got down there, I didn’t see a lot of issues. I thought, maybe I’m going to be heading home in a couple of days,” Lee said.

However, once Lee entered the residential areas, she saw just how devastating Hurricane Harvey has been on the area. Homes and possessions had been completely destroyed.

“Their lives were garbage sitting in the streets because everything was ruined,” Lee said. “Seeing people’s lives thrown out on the street was heartbreaking.”

“I probably cried everyday but two while I was there. There was something that just hit me so hard. It was emotional,” Lee said.

Each day Lee spent in Texas was emotionally wearing. The very first house Lee went to was the home of a woman who was a hoarder. The volunteers who were previously working with the woman were helping her let some items go.

However, when the crew Lee was a part of showed up, the woman wouldn’t let them in and told them to go away.

“Being there and seeing how bad she needed help—she was in her eighties, was by herself—it was really hard to walk away,” Lee said.

Lee also recalled helping what she thought was an older couple, but soon learned that the woman’s husband had died the day of the hurricane. The house was filled with customized furniture, cabinets, and more that the husband had made by hand over the thirty years of their marriage, living in that house.

Lee said they saved one room for last, which had a custom-made bookshelf. However, the crew was told they had to take the bookshelf apart and take it out of the house.

“They told us we had to destroy something that meant a lot,” Lee said. She saved the wooden handles to the cabinets of the bookshelf so the woman could have them as a keepsake.

The volunteer crews Lee was a part of were made up of people from all around the country including places like Louisiana, New York, Idaho, Denver, Texas, and Seattle.

“I made quite a few friends,” Lee said. “It was cool to meet some people I had been talking to online,” she added.

Since the volunteer work was so emotionally difficult, when the crew got back to their base camp in the evenings, they sometimes got “goofy and silly” Lee said.

Lee and a fellow volunteer from Washington, Kyle Legman, went to Walmart one evening and found a unicorn costume, which they thought was hilarious, and they came up with an idea to bring some laughter to the crew.

“We just laughed and laughed at this unicorn outfit in the middle of Walmart,” Lee said. They bought the costume and a bag of Hershey’s Kisses, and one night when the crew was tired and getting grumpy, Legman went and changed into the costume and threw the chocolate kisses around.

“It’s one of my favorite memories,” Lee said of the unicorn costume. She added that the camaraderie between the volunteers was one of her favorite takeaways from the entire experience.

The situation in Texas is devastating, and there are still several people, many of whom are families and elderly people, who are in need of assistance.

“It’s worse than what people might be seeing,” Lee said. “They could really use some help.”

Almost two months later, houses are still full of moisture and are in need of being gutted. There are bugs, frogs, and rodents infested in the walls and floors of some homes. Some people are still living in tents. Some towns still do not have power.

Lee explained that the Cajun Army has a list of over 400 houses to clean up and gut, and these are just the ones who have reached out for assistance.

Though she understands it’s hard for people to go and help because of day-to-day responsibilities, she encourages people to go if they can.

“If anyone wants to go help, I can get them in touch with the right people,” Lee said.

If people are unable to go to Texas to volunteer, making donations to the victims, or donating food, supplies, and tools to the Cajun Army are great ways to lend a helping hand.

For more information on how or what to donate to the Cajun Army, people can visit www.thecajunarmy.com.  People can also visit the Cajun Army’s website to find out how to get involved in volunteer work.