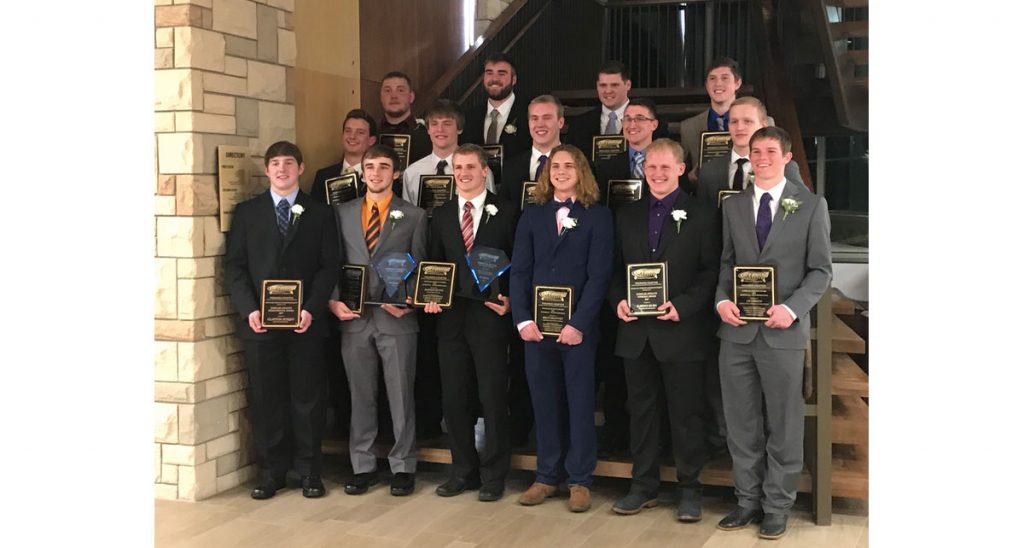 LARAMIE– Sixteen Scholar Athletes from across the state of Wyoming and the University of Wyoming were honored Saturday night by the Wyoming Chapter of the National Football Foundation and College Hall of Fame.

Each of the honorees received a scholarship and a plaque, and for only the second time in the chapter’s 24 year-long history, two athletes were named as the state’s Top Scholar Athlete. The honor went to Dawson Butts of Upton and Cameron Quigley of Newcastle.

Both athletes have a Grade Point Average of 4.0, both rank at the top of their respective high school classes, and both had great football careers.

About Butts and Quigley

Butts rushed for 1,243 yards in 2017 or 124.3 yards per game. He scored nine rushing touchdowns and 14 all-purpose TDs along with 16 solo tackles, 28 assisted tackles and 4 interceptions.

Quigley starred at quarterback and for his career he rushed for 1,869 yards and 19 touchdowns. Additionally, he passed for 1,995 yards and 12 TDs, he returned kicks for 1,198 yards and four TDs. Both were All Conference and All State.


Others Who Were Honored

The Courage Award is a special award presented to scholar-athletes who have shown unusual courage in overcoming a physical or mental disability or adversity to become valuable and inspiration members of their respective team.

Similarly, the Perseverance award is awarded to a scholar-athlete who has shown uncommon motivation and persistence to overcome illness or injury and become a valuable and inspirational member of their team.

The banquet was held at UW’s Marion H. Rochelle Gateway Center with nearly 300 guests in attendance.

Finalists for the Scholar-Athlete Award included: