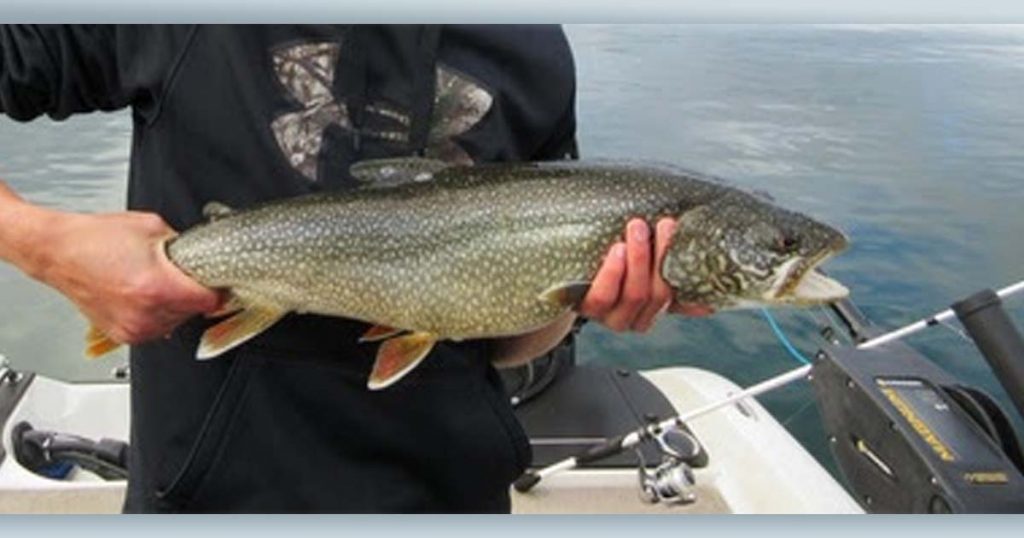 Ice is rapidly coming off Flaming Gorge Reservoir, but that doesn't mean there isn't still plenty of great fishing ahead.

GREEN RIVER — Temperatures have been mild and the ice conditions are changing rapidly at Flaming Gorge Reservoir. The forecasted warmer weather suggests that soon, open water will be everywhere.

This might be sad news for ice anglers, but is good news for those who enjoy fishing Flaming Gorge from shore and out of a boat. As the ice recedes, both shore and boat fishing will be excellent.

WGFD Green River Region Fisheries Biologist John Walrath says Game and Fish staff want to make sure anglers are safe out there, as they transition from ice to open water.

“Shoreline ice always erodes first and, while it might be firm first thing in the morning, chances are the shoreline ice will be soft when it is time to leave,” Walrath said. “Avoid all pressure ridges, as they will melt faster than surrounding ice and are even more dangerous now.”

“Don’t get on the ice if you can see an expanse of open water, even if it is in the distance. Large sheets of ice can break free leaving you afloat in the reservoir,” Walrath continued. “We recommend against venturing onto the ice this late, but if you decide to go, heed the following tips: do not go out alone, wear a lifejacket, pack a whistle and ice spikes on your person, bring a throw rope, and tell someone where you plan to be and when you expect to get back.”

Walrath says if you’re ready for some soft water fishing there will be plenty of shore fishing opportunity as the ice recedes. The trout and salmon in the Gorge frequent shoreline habitats from ice-off through mid-June.

The influx of nutrients creates localized areas of productivity, resulting in an abundance of food that attracts trout and kokanee. Search for these areas in the middle to back of the bays that receive runoff from extended drainage areas on land.

Additionally, anglers should not be surprised if they catch a few burbot, too. They are still plenty active and will remain so until water temperatures increase in summer. If heading out on a boat, you have lots of available habitats to fish.

“However, we want to remind boat anglers that as the ice recedes, boaters need especially be watchful for chunks of ice adrift in the reservoir and mindful of those ice-cold water temperatures,” Walrath said.

Spring is a great time to fish for the abundant small lake trout in Flaming Gorge Reservoir; most less than 22 inches in length that make delicious table fare.

“If you don’t have a boat this is a great time to take advantage of the liberal limits on small lake trout,” Walrath says. “Grab a long casting rod, an assortment of spoons and jigs, and a good bathometric map and head to the Flaming Gorge.”

He encourages anglers to look for shorelines adjacent to deep water and get your lure as far out as possible and then let it sink. Start retrieving before you reach the bottom. Vary your retrieve until you figure out what works.

If you own a boat, don’t miss out on this early lake trout action. Whether trolling or jigging fish the areas and structure where you found them just a few weeks ago through the ice.

“Use your electronics to look for concentrations of lake trout on or just above the bottom and don’t over look the draws that connect the large flats to the deep water habitats. Once your small lake trout catching skills are sharpened consider entering the 2019 Mac Attack Fishing Derby – April 27 and 28,” Walrath said.

Anglers can learn more about the Mac Attack and why biologists are concerned about the increasing abundance of small lake trout on the Department’s Green River Regional Webpage at: https://wgfd.wyo.gov/Regional-Offices/Green-River-Region/Flaming-Gorge-Management-(1). The same page will provide anglers tips for catching small lake trout and great recipes to use when it is time to cook your catch.

Anglers can pick up a copy of the 2019 Wyoming Fishing Regulationsat any Game and Fish regional office, most license selling vendors, or at wgfd.wyo.gov. For questions and or more information call the Game and Fish Green River Regional Office at 307- 875-3223.