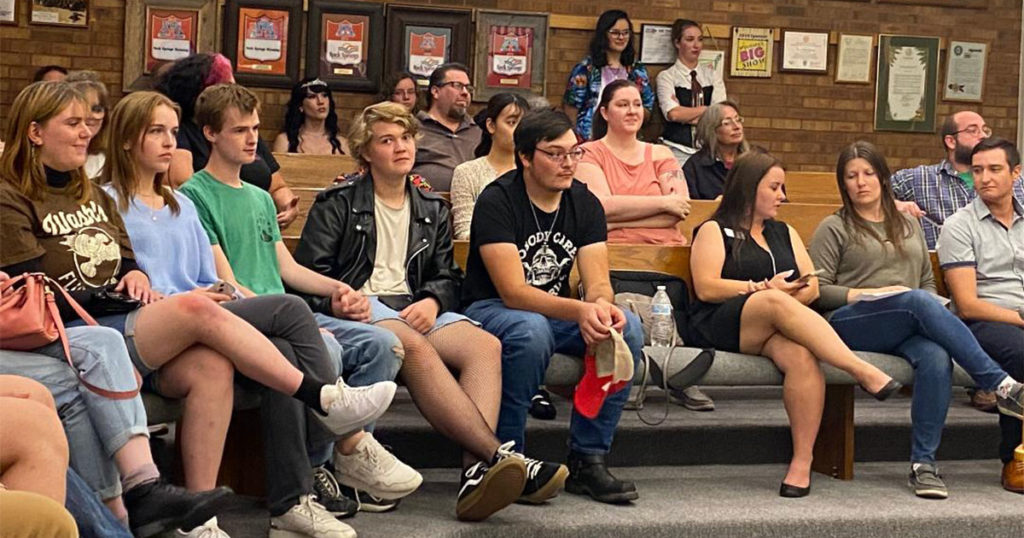 Cast and crew members of "The Rocky Horror Picture Show" production packed the Rock Springs City Council to show support for the show and the drag theater company putting it on. SweetwaterNOW photo by Stephanie Thompson

ROCK SPRINGS — It was a packed house at the Rock Springs City Council meeting. Although a local theater group attending the meeting may be used to packed houses, they may not have expected they’d be the ones filling the Council Chambers.

Cast and crew members of “The Rocky Horror Picture Show,” which is a production of The Starling Company, filled the Council chambers last night to listen to any residents who had questions about the company or the show’s upcoming production at the Broadway Theater. According to a description of the show on the Broadway Theater’s website, “In this cult-classic, sweethearts Brad and Janet, stuck with a flat tire during a storm, discover the eerie mansion of Dr. Frank N Furter. As their innocence is lost, Brad and Janet meet a houseful of wild characters, including a rocking biker and a creepy butler. Through elaborate dances and rock songs, Frank N Furter unveils his latest creation: a muscular man named ‘Rocky.'”

He said after reading the article he wanted to give it a “conservative voice.” He said when you’re talking about gender identities, those things are being introduced in our schools now. “The concerns that I have is this is being pushed out of a company or drag organizers out of Utah… ” He wanted to know if there would be an age restriction placed on who could see the show.

It was at this point, that Councilor Rob Zotti interrupted and said Stocks was getting off his point about the drag theater and was labeling a whole group of people that don’t deserve that label. Zotti said this is a group of theater people that want to have a voice and want to put on some plays. As for the particular show itself, “The Rocky Horror Picture Show” has been around since 1975 and it’s up to the parent to decide if it’s appropriate for their children.

Councilor Tim Robinson said he was glad Zotti stepped in and said CRT is not taught in any school in Wyoming and isn’t part of the curriculum in Wyoming.

“You started out talking about the drag queen theater event, but then you went into pedophilia and I want to encourage you to do some research and see that there is no direct connection between the LGBTQIA community and pedophilia,” Robinson said. “It’s a completely different thing. By making that association you are mudding the waters quite a bit.”

“If you don’t want to go see the drag queen theater, you don’t have to,” Robinson said. “I think associating this group with crime and criminals is wrong.”

Mayor Tim Kaumo said the Broadway Theater is owned and operated by the city, but it’s a public building and open to anybody and paid for by taxpayers dollars. He said it’s up to the families to decide if their children or grandchildren can go to the show.

Kenneth McCormack, who owns and operates The Starling Company, said he’s gender fluid and happy with any pronouns. For those who don’t understand what that means, somedays he’s more masculine, while other days he’s more feminine, and some days a mixture of the two. McCormack said he’s also a drag queen and his stage Starling My Darling.

McCormack said he had a whole letter typed up he was going to read, but decided not to because of how many people showed up in support. He said he is proud of the cast and crew who include college and high school students, parents, and grandparents, who show up every day to bring art to the community.

“Complaints such as this, though it is a very simple form, it’s based on ignorance and fear and a matter of not knowing…” McCormack said. “I’m always open to have a conversation as are most queer people.”

“I live unapologetically and proudly. I experience queer joy everyday,” McCormack said. “And while some may take issue with that term, queer joy is very different than regular joy and enjoyment. It stems from being historically oppressed…”

He thanked Stocks for starting a conversation and wanting to learn. He said he has an awareness of his art, subject matter and the people who chooses to work with, and the audiences he presents that art to. He tries to make them feel beautiful and appreciated. “I would never put anyone in a compromising situation,” he said.

McCormack said residents should take note that like it says on the poster, the show is rated R for restricted for individuals under the age of 17. Those under 17 must have a parent or guardian present.

While McCormack told the Council the show is rated R and for ages 17 and over unless children are accompanied by an adult, neither the R rating or age appropriate recommendation was on the theater’s webpage about the show at the time this article was published.

This is just a snapshot of the discussion that took place on this topic. Click here to watch the entire discussion, which starts around 37 minutes.