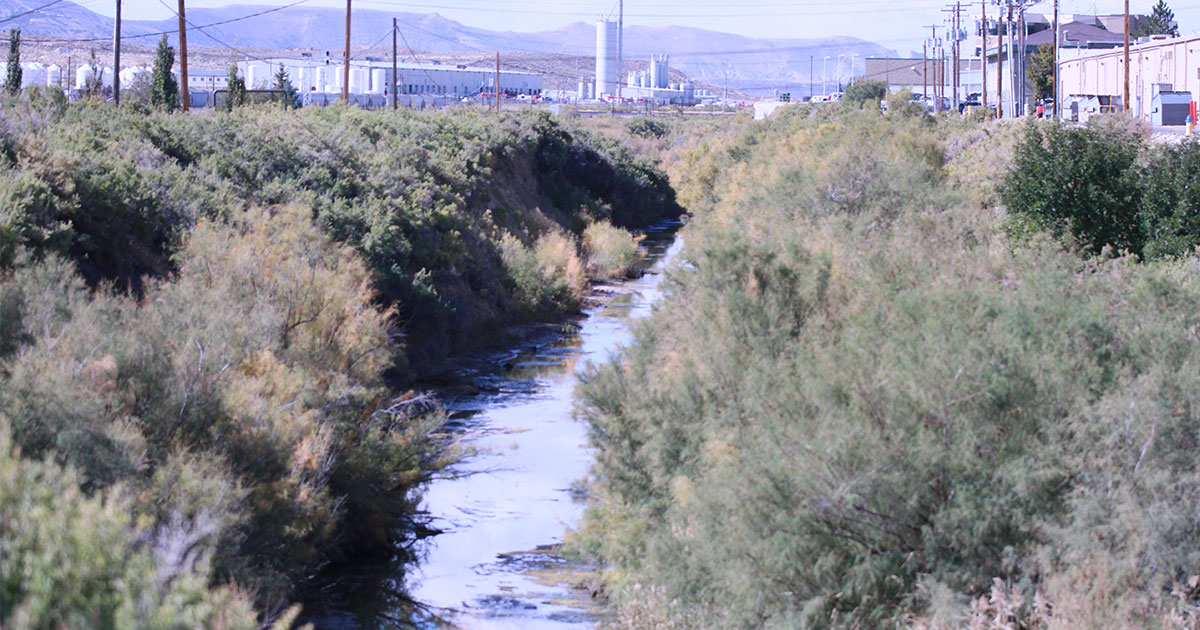 CHEYENNE — The State Loan and Investment Board (SLIB) approved $3.86 million in federal funding for the first phase of the Bitter Creek Restoration Project during a quarterly board meeting on October 3.

The City of Rock Springs is required to contribute a match of at least ten percent in addition to the funding approved by the state. Mayor Tim Kaumo said after the SLIB meeting last Thursday that the city will contribute a total of $1,092,249, bringing the available funding to around $4.9 million.

Tracing what was involved in putting together just under $5 million in funding for the first phase of a four phase reclamation project highlights how complex locating money for projects of this type can be. The majority of funding is technically federal money that’s administered and distributed by the state. While the local match comes from excess funds collected through the 2013 Sweetwater County specific purpose sales tax; which reverted to the city for distribution as a result of state legislation.

The $3.86 million in federal funding comes from the Abandoned Mine Land (AML) reclamation program, which is administered by the Wyoming Department of Environmental Quality (DEQ). The AML reclamation fund, created as part of the 1977 Surface Mining Control and Reclamation Act, is collected by charging extraction fees to the coal mining industry.

The SLIB is comprised of Wyoming’s five statewide elected officials and manages the state’s permanent land funds. AML funds are appropriated at the request of the Governor “for the construction of public facilities related to coal or mineral industries or for other activities related to the impacts of these industries,” according to information in the SLIB meeting packet. The board makes recommendations to the Governor on what eligible projects should receive funding.

Matching funds from the city are available as a result of a bill sponsored by House District 48 representative Clark Stith and approved during the 2019 state legislative session. House Bill 95 “Special purpose tax-excess funds” authorized the distribution and expenditure of excess taxes collected for a specific purpose under specified conditions. The bill detailed how excess funds could be distributed back to the county and other entities in the case that the resolution enacting the sales tax increase failed to specify that information.

“The reconstruction of the Bitter Creek has been on the City’s agenda since I took office for my first term in 2003. Sixteen years later, we are just now receiving funding for Phase One of a four Phase project. It has taken several years to meet the permitting requirements and design of the project,” Kaumo said in an email. The Master Plan for Reclamation and Development of the three miles of Bitter Creek that bisects Rock Springs dates all the way back to 2007.

Of course, dealing with the flooding hazards from Bitter Creek dates considerably further back, all the way to 1924.

“It’s been a long time coming,” Stith said. “The goal of this project is to get that whole neighborhood out of the flood plain.” Stith was referring to the fact that right now 580-acres of Rock Springs is within the Federal Emergency Management Agency (FEMA) designated 100-year flood plain. The complete Bitter Creek restoration would remove the majority of that area from the flood plain. That would protect and encourage development and also mean property owners would no longer be required to purchase flood insurance.

Kaumo noted that the funding procured this month is only a first step in that process, saying, “We will continue our goals to protect our citizens, remove our city from the flood way, reduce insurance costs and improve economic development in Rock Springs as we plan funding options for the remainder of this large project.” Kaumo said during his 2018 mayoral campaign that he would lobby aggressively for the completion of the bitter creek restoration.

According to the 2007 master plan, the main purpose of the restoration is to reconstruct the creek channel to contain flooding and remove currently listed properties from the flood plain designation. Additionally, the restoration will “set a framework for transforming the long-neglected eyesore into a green corridor that links neighborhoods with each other and downtown, and provides a pleasant and inviting pathway system accented with gathering places, seating places, and plazas.”

The restoration project will start in the furthest downstream portions of the creek within the city and then move upstream in progressive phases. Phase One of the project would involve an approximate area from the confluence with Sweetwater Creek just west of the Plaza Mall to the creek bridge on the west side of the South Side Belt Route.

Some further preliminary steps will take place before construction can start. Before AML funding can be distributed, the project requires a review under the National Environmental Policy Act (NEPA). The NEPA review is conducted by the DEQ. After the review is approved by the Office of Surface Mining Control and Reclamation Enforcement, that office issues a notice to proceed. Kaumo said construction should start by early next spring.