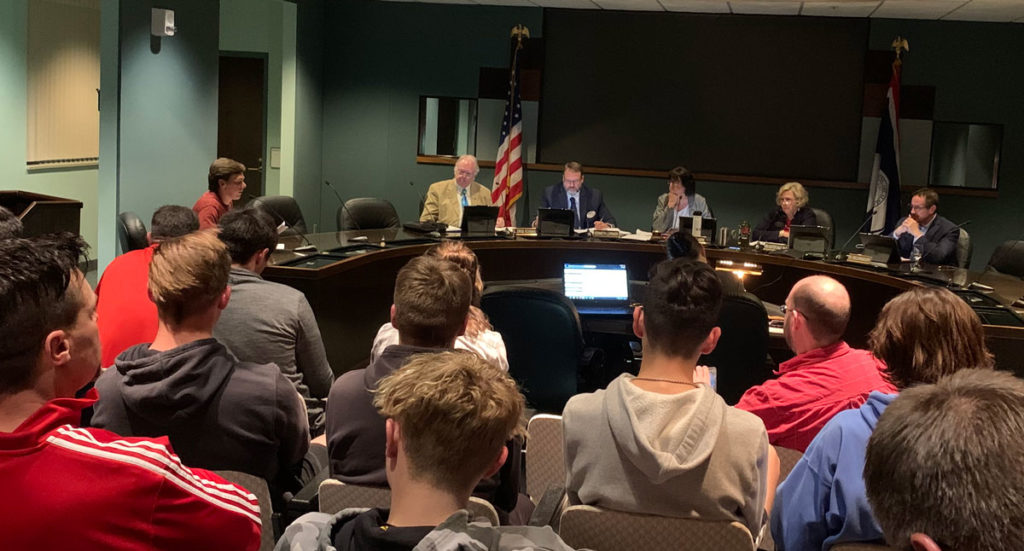 Kamden Carroll, WWCC student and soccer player, addressed the WWCC Board of Trustees regarding the termination of the men's soccer program as his teammates watch.

ROCK SPRINGS– On Tuesday, March 10, Western Wyoming Community College issued a press release stating they would be cutting the men’s soccer program effective the end of the Spring 2020 semester.

“While the decision to terminate Men’s Soccer is difficult, continuing the program as it currently exists is contrary to our values and our mission. We hope to one day restructure and reinstate the program,” Lu Sweet, WWCC athletic director and head men’s and women’s soccer coach, said in the brief press release.

To address the situation and in search of answers, several members of the men’s soccer team attended Thursday night’s WWCC Board of Trustees meeting to speak during the public comment period.

It was clear that the team wanted answers and they wanted an investigation into the removal of the program.

Many of the young men who recently signed or resigned with the WWCC team were notified of the termination of the program on Tuesday through the press release, and WWCC men’s soccer coach, Roger Carroll, said he was not involved in the decision at all.

“I was called in Monday morning, they said the program was terminated. Period,” Roger Carroll, WWCC men’s soccer coach told the board.

“My issue with that statement is that it implies the current team and I do not hold acceptable values in the eye’s of Western Wyoming Community College. The young men I have coached for the past two months do not deserve that kind of public humiliation or attack of their character,” Roger said.

During last year’s soccer season, several members of the team were involved in theft, which resulted in them being kicked off the team. Earlier this year, former head coach, Jeff Atkinson, was also removed from his position as coach.

After the players involved in illegal activity were removed, 10 students were left on the team and Roger said he made 6 new recruits since taking over coaching duties.

Roger, as well as the players themselves, believe they fit this statement. However, Roger said the team has not been given the opportunity to prove this under his direction.

He said the athletes prioritize education, and this is reflected in their GPAs. Additionally, the students have served their community and school by working at the college’s other sporting events and participating at community events. Roger said the students are dedicated athletes who just want to be on a soccer field.

“In response to their dedication to the college and the community, the college rips the program out from under them,” Roger said.

In a second statement released to the press by WWCC, it was explained that the college could not release the details surrounding the decision to terminate the program due to the college being bound by the Family Educational Rights and Privacy Act.

“We are sorry that a reason cannot be given for this decision because the College is bound by FERPA (Family Educational Rights and Privacy Act) and employee confidentiality laws,” the statement read.

Kamden Carroll, along with several other members of the soccer team, made the decision to waive their FERPA rights to encourage the college to investigate the decision.

“I myself want to be transparent about who I am and waive FERPA for the board to investigate my character,” Kamden said.

Student-athletes Alec Adam, Jaymin Carroll, Brody Bunker, Colton Mathys, T. Spencer Dayley, Brandon Perdomo all explicitly stated in letters to the board that they waived their FERPA rights as well. In the letters, they also shared their GPA’s, defended their character, and explained how they are working to improve in soccer.

The team suspects missing study hall hours may be used as justification for the removal of the program, however, they chalk that up to miscommunication.

Alec Adams explained the study hall situation in his letter, writing the following:

“During President’s Day weekend, the men’s soccer team wasn’t informed about our study hours. We were never told if we had to get our study hours. Due to not having class on Monday and having our study hall session that we have every Sunday being canceled, we thought we didn’t have to get our hours. Apparently, this wasn’t the case, but we had no idea because we were never told. Not all the players on the team got their hours completed. With a lot of the players being from out of state, they went home for the long weekend. While the other teams were in season, meaning they had training sessions that required them to stay at the school, allowing them to complete their hours.”

The school has neither confirmed nor denied the study hall hours as a factor in their decision.

In Search of Answers

Those who spoke during public comment brought forth a series of questions they wanted answered by the college to justify the termination of the program.

Kamden asked why there wasn’t a probation period clearly spelled out when the soccer team did a wrong action, what the team did wrong to warrant the termination of the program, and why many of the team members were resigned and new recruits were signed to the program.

“Either this decision to terminate was rash without much planning or thought, or it was deceitful and dishonest to players, the coach, and new recruits, as well as the entire communities of Rock Springs and Green River and Sweetwater County,” Kamden said.

Taylor Jones, father of a recently signed soccer player, also proposed some questions in hopes of some answers. First, he asked if it was possible to revisit this decision.

“I do not have answers for you,” Chairwoman Regina Clark said. She said the board would only be taking comments, as it was not an agenda item.

Jones also asked if any other organizations were involved in the decision, whether the decision required board action or not, and whether all the athletes have been contacted and notified of the decision. He additionally asked if there is a plan going forward.

In the second statement made by WWCC, they said they are working on placing the athletes with new teams and scholarships.

“Should a current or new men’s soccer player choose to stay at Western, they will be given a scholarship for next year in the amount they originally signed for,” the statement read.

Jones said this is just a “warm and fuzzy” statement, as it does not solve the problem the young men are now facing. If they stay at Western, the athletes risk not being signed next year after taking a year off.

Kamden questioned the fairness in the treatment of the teams at WWCC, pointing out that a Western basketball player was recently arrested on February 11, 2020, for theft and missing his court date, but was allowed to continue his season.

He pointed out half of the soccer team was removed last year for the offenses of theft and suspicion of theft.

“The punishment for the soccer players was very public and ended in removal of the team. For the basketball team, either there has been no punishment or it has been extremely private, and it has ended in this player being an all-region player and on an all-region team. As a soccer team, we want answers from the athletic department on how you deem this as fair,” Kamden said.

WWCC Will Not Readdress the Decision at this Time

The soccer team asked that the matter be investigated and that the board make a motion to reinstate the soccer program, starting next fall.

“We all chose Western Wyoming Community College soccer because we believed in this program and had a passion for soccer. We trusted the administration that they were putting us in a place to be successful. This action was not what we have signed up for. We have held up our end of being good people, good students, and good athletes. I just wish that the athletic department would hold up their end of letting us play the sport that we love and getting the education we came here for,” Kamden said.

The board thanked each individual for their comments. However, in a statement by President Dale, she said they will not be revisiting the decision at this point in time.

“Clearly, there is tremendous passion in the audience and concern, and we hear that,” Dale said. “We recognize that this decision does seem sudden and folks were notified after the decision was made. And while Western has followed the rules associated with NJCAA and their timeline for making these kind of decisions, we apologize for how this is viewed by our families, players, coaches, and community members.”

“NJCAA has been notified of this decision and they have begun to reschedule for next year. However, I would like to think we can revisit this decision in the future, but for now, this decision is made,” Dale said.

Despite the college sticking to their decision, the men’s soccer team is not ready to give up the fight yet. The players and families were disappointed by the meeting and the outcome.

Alec Adam said he drove from Salt Lake City for the meeting and did not get to speak on the issue, as WWCC allows 30 minutes per topic in public comment.

Kamden further supported his claim that this decision was “deceitful and dishonest” and he believes the athletic department is not following its own mission statement.

“Dr. Dale’s statement that they followed NJCAA rules to disband our team must have taken time, and therefore, was deceitful and dishonest to the players who were continuing to do community service for Lu Sweet and the athletic department at this time,” Kamden said. “Deceiving, lying, hiding the truth are not the actions of Good People.”

SweetwaterNOW reached out to Lu Sweet for a response following the Board of Trustees meeting, and as of publishing time, have not received word back.