Meagan Sheesley was one of the first patients to be seen by University of Utah Health’s Dr. Erin Clark at the new Maternal-Fetal Medicine clinic at Memorial Hospital of Sweetwater County, made available through its partnership with Salt Lake City-based U of U Health.

That can be difficult to obtain when your pregnancy is considered high risk. Tears came to her eyes Feb. 6 as she explained her previous pregnancies and medical history to Dr. Erin Clark, an OB/GYN at University of Utah Health who specializes in high-risk pregnancy.

Sheesley is 22 weeks pregnant with her fourth daughter. She is a Type 1 diabetic, fully insulin dependent. She also is no stranger to preterm, high-risk pregnancies.

She has had two preterm deliveries and one miscarriage. Knowing what can happen, peace of mind goes a long way.

It takes a team

“Patients who haven’t been able to see me in Salt Lake due to distance and resources, can now see me here,” Dr. Clark said. “And patients who would have made the drive to Salt Lake seem very grateful to receive services in their own community.”

Dr. Clark brings her expertise to the new Maternal-Fetal Medicine clinic Memorial Hospital of Sweetwater County, made available through its partnership with Salt Lake City-based U of U Health. Area residents now have access to resources provided by U of U Health’s Maternal Fetal Diagnostics Center.

What does it mean to have the MFM clinic in Sweetwater County?

“It means I don’t have to travel to Salt Lake in this,” Sheesley said, nodding out the window to the heavy snow falling in Rock Springs in the last weeks of February. “It’s that peace of mind.

“If I were to have to go there today, I’d have to cancel my appointment,” she explained.

She now drives up the road for an appointment with Dr. Clark.

“There is that peace of mind knowing that you have somebody who specializes in high-risk, who knows maybe a little bit more about why you’re high risk and the precautions to take to prevent complications,” Sheesley said.

“We’ve shared a great relationship with the specialists at the U of U since I started here several years ago,” Dr. Wheeler said. “It is a great benefit for our patients to get the same great care without having to travel to Salt Lake. We are very excited to have Dr. Clark here, who we know will provide excellent care for our patients.”

Sheesley also is happy with the partnership.

“Wheeler is very knowledgeable about Type 1 diabetes and he knows what to look for. If I tell him I have some back pain, it’s immediate urine tests, blood tests, the whole nine yards.”

Her husband, Steven, is quite protective when it comes to her health, and even he likes both Drs. Clark and Wheeler, she said with a grin. However, this pregnancy gave him reason to be concerned early on.

Sheesley said she spotted throughout the first trimester.

“Dr. Wheeler was amazing. He got me in every week to do ultrasounds.

“He knows my medical history. He knows everything about me. I can call him any time, day or night. If I have an issue, he’s there.”

He also is in constant contact with Dr. Clark.

“I have like an entire team; everybody communicates with everybody,” Sheesley said.

Sheesley said she’s lucky to have Dr. Wheeler as her physician.

“I should have had him deliver Rylee and Alyssa. … I decided to go with a whole other doctor. I should have listened to him.”

Any baby born before 37 weeks is considered a preterm birth. For every week, even every day, that a baby is born before 39 weeks gestation (one week before the due date) the risks are greater, Dr. Clark said.

“Preterm babies have higher rates of death and serious short- and long-term medical problems,” she said. “If we can delay preterm birth, we can dramatically reduce the risk of death, disability and serious complications in preterm newborns. Plus, the longer babies stay in-utero, the shorter their time in the neonatal intensive care unit.”

The outcome for Sheesley and her baby hinges on 1) excellent control of her diabetes, 2) using evidence-based strategies to reduce her risk of recurrent preterm birth, and 3) reducing her risk of other pregnancy complications, which are increased in women with medical problems like diabetes, Dr. Clark said.

“As a maternal-fetal medicine physician, I make a plan with Meagan and her obstetrician that addresses all of these items,” she said. “I reassure patients that their goal is the same as my goal: give them the best chance of a healthy baby going home from the hospital with a healthy mom. All of our recommendations evolve around this central goal.”

“If I would have gone full term, they projected she would have been well over 10 pounds,” Meagan Sheesley said. “Although she was small, Alyssa was one of the bigger babies at that stage.”

Her early birth was a result of placental abruption. The placenta tore away from the uterus with no warning, she said.

“I had an ultrasound the day before and everything was fine. I didn’t have any of the common symptoms. I went into labor on my own, which makes me even more high risk.”

Sheesley remembers it all too well. She and her husband had just returned from the MHSC emergency department with Rylee, who had an ear infection.

Once they got home that evening, Sheesley was certain contractions had begun. After about an hour, she called the doctor. He asked her to come to the hospital to get checked out.

“We live down the street … just two minutes to get here,” Sheesley said. “By the time we left our house and drove up here, I was (dilated) at a five. They gave me all sorts of medication to stop it.”

A transfer to U of U was arranged. In the meantime, she dilated to 10.

Instead of being rushed by air ambulance to U of U Health, she had an emergency cesarean section. A team from the U of U Health’s Newborn Intensive Care Unit had to be flown in to pick up Alyssa.

“They couldn’t put me in the helicopter because I was fully dilated and didn’t think I would make it to Salt Lake without having her mid-air,” she said.

Once she was discharged, she and Steven drove to Salt Lake to be with their newborn.

Tears welled up in her eyes as she explained all of this to Dr. Clark.

“Until you experience something like that and experience the fact that they are going to take your baby three hours away and you have to stay here and you’re in an emergency situation that affects your child, it’s emotional.”

At 21 weeks, Sheesley said this baby is “weighing in perfectly. She’s not too big like typical diabetic babies.”

“And, it’s definitely a girl,” Sheesley said. “Steven has asked that twice.”

Sheesley said this is the healthiest pregnancy she’s ever had.

The Sheesleys now tag-team appointments between Wheeler and Clark every two weeks. They work together to make sure Sheesley and her unborn baby remain healthy.

Her due date is July 2. A tentative C-section is June 15 – it was her grandmother’s birthday. 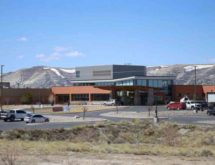