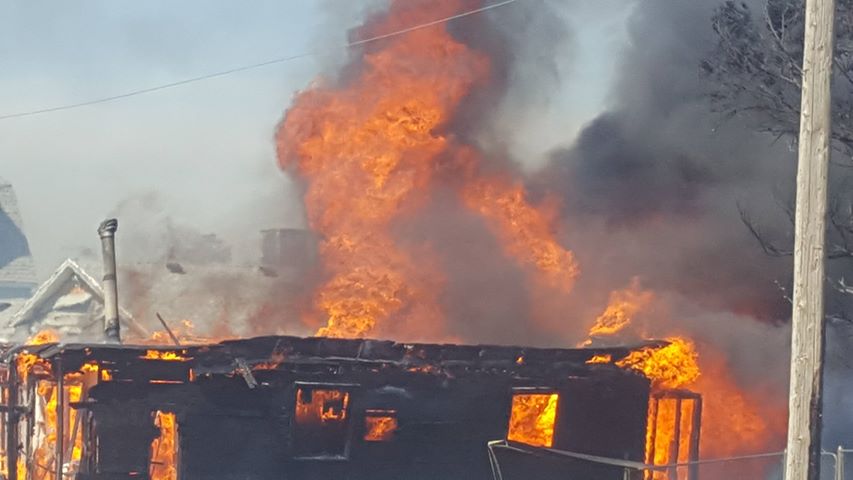 The six-acre fire started as a small brush fire and spread to a couple outbuildings and wood piles within a matter of one single minute, according to Sweetwater County Fire District #1 Fire Chief Scott Kitchner.

Deputies barely had enough time to get people evacuated.

“It really went crazy with this wind,” said Kitchner, who stressed it really was less than a minute that these people had to get out.

The fire ended up burning four outbuildings/storage sheds, three vehicles, and a couple trailers before it jumped across Mountain Drive and burned all the way to Yellowstone Road.

Five houses or structures were threatened or partially damaged with melted siding.

“We got really lucky we didn’t have two families lose their homes over there,” said Kitchner.

County Road and Bridge sent their water trucks to help out because the firefighters were having difficulty hooking into water. The trucks were having major issues getting their trucks around the fire due to traffic blocking their way.

BLM wildland firefighters took care of some of the wildland fire while other trucks tackled all the structure fires. WYDOT also sent a front end loader to move wood piles and Wyoming Highway Patrol was assisting.

Kitchner said they had 45-50 people on site coordinating to put this fire out.

“We are extremely thankful for all the agencies that came out to help. We might not have had the outcome we did if they hadn’t,” said Kitchner.

There were no injuries and no loss of animal life. One firefighter was sent to the hospital for heat exhaustion and smoke inhalation, but he’s doing fine.

The cause of the fire is still under investigation. Crews are still keeping an eye on the hot spots to make sure nothing reignites.

With the hot, dry, and windy conditions, Kitchner stressed that this fire was cooking in less than a minute, so people should be very careful with any of their recreational activities leading up to the 4th of July.