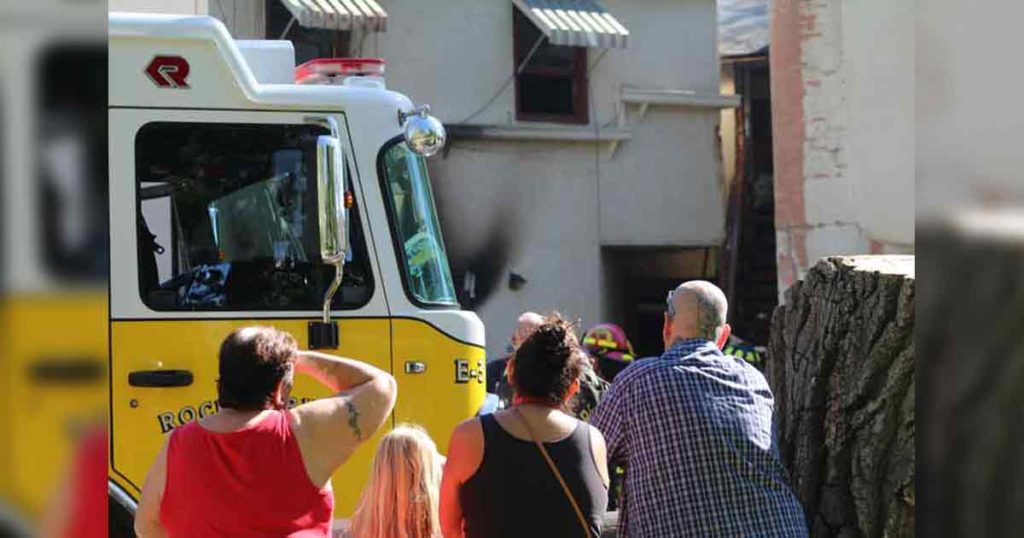 Editor’s Note: The following story was edited to include additional information from a Rock Springs Fire Department press release.

ROCK SPRINGS — One apartment is a complete loss and one woman was transported to Memorial Hospital of Sweetwater County (MHSC) after an apartment fire at 506 Elias Street this morning.

According to Rock Springs Fire Department Chief Jim Wamsley, the fire could be seen across the city as fire crews, the Rock Springs Police Department (RSPD), Sweetwater Medics and Sweetwater County Fire District No. 1 responded to the scene as soon as the call came in at 7:44 this morning. At first, the firefighters were told the fire was on K Street, but it was actually at an apartment building on Elias Street, which can be accessed from both streets, he explained.

Upon arrival, firefighters discovered the bottom apartment was fully engulfed with 20-foot flames and could easily be seen by bystanders in Bunning Park. Firefighters worked quickly to knock the flames back to prevent it from spreading to other apartments, Wamsley said. Most of the residents had already evacuated their apartments prior to emergency personnel arriving, however the RSPD made sure all were out, he said.

The woman and her grandson, who were home at the time of the fire, were able to get out of the bottom apartment. However, the woman suffered from smoke inhalation and was transported to the MHSC for treatment. Her grandson was okay.

Once the initial fire was put out, firefighters stayed at the scene to make sure there were not any hot spots. The attic spaces of both sides of the complex were checked for extension and the eaves and walls were also explored to ensure that fire was fully extinguished, according to a press release from the RSFD.

Due to the fire, most of the neighborhood was without power until it was safe to turn back on.

The bottom apartment sustained heavy smoke and fire damage and is a complete loss and no longer livable at this point, Wamsley said. A second apartment sustained damage to the entry way, charred windows, and part of a room. Wamsley does not think this apartment can be lived in until the damage is fixed.

RSFD initially responded with three apparatus and 10 firefighters; another four came in through call-back. Sweetwater County Fire District No. 1 aided the efforts with two apparatus and seven firefighters, the press release states.

“The cause of the fire is still under investigation,” Wamsley said.