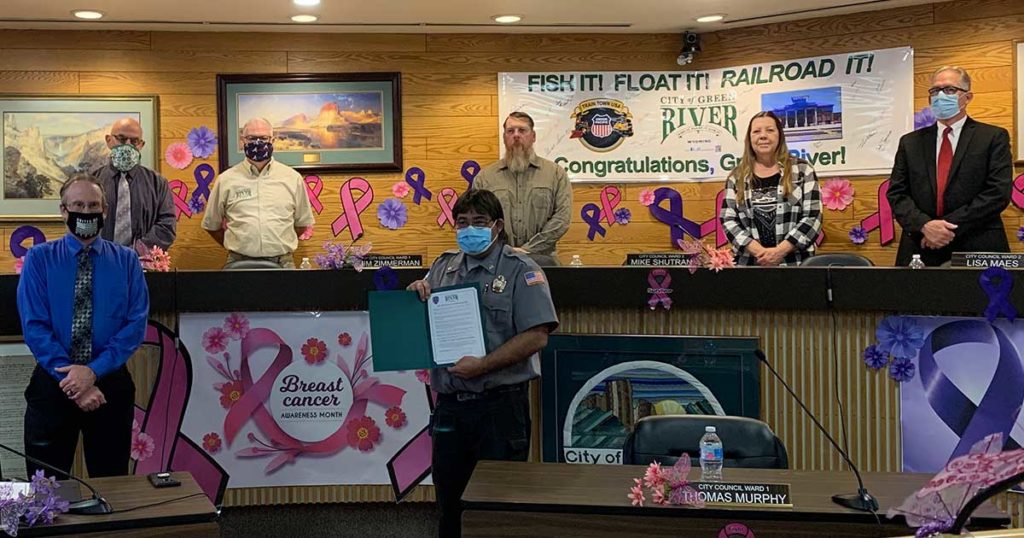 The purpose of the week is to promote fire safety within homes. According to the National Fire Protection Association, home fires killed 3,655 people in the United States in 2018. Fire departments across the nation responded to 379,600 home fires in 2018. The majority home fires start in the kitchen while cooking.

According to the proclamation, when a smoke alarm sounds, residents of the home may only have two minutes to escape to safety. The goal of Fire Prevention Week is to ensure residents have home fire escape plans for their homes.

An escape plan includes two exits from every room in the home; a path to the outside from each exit; smoke alarms in all required locations; and a meeting place outside where everyone in the home will meet upon exiting.

“During fire prevention week, children, adults and teachers learn how to stay safe in case of a fire,” Erdmann said. “Firefighters provide life saving public education in an effort to drastically decrease casualties caused by fire.”

The Origins of Fire Prevention Week

Erdmann said Fire Prevention Week is observed the week of October 9 in remembrance of the Great Chicago Fire which took place October 8 and 9, 1871. According to Chief Erdmann, the fire started when Mrs. O’Leary’s cow kicked over a lamp. The fire spread and caused devastating damage, killing more than 250 people, left over 100,000 people homeless, destroyed more than 17,400 structures, and burned more than 2,000 acres of land.

Up until the 1970s, Erdmann said fire department strictly fought fires. Today the fire service has progressed to be an all-hazards department.

“With these additional services that are being provided to the community, the Green River Fire Department is continually working to identify, educate, and mitigate potential incidents through our Community Risk Reduction Program,” Erdmann said.