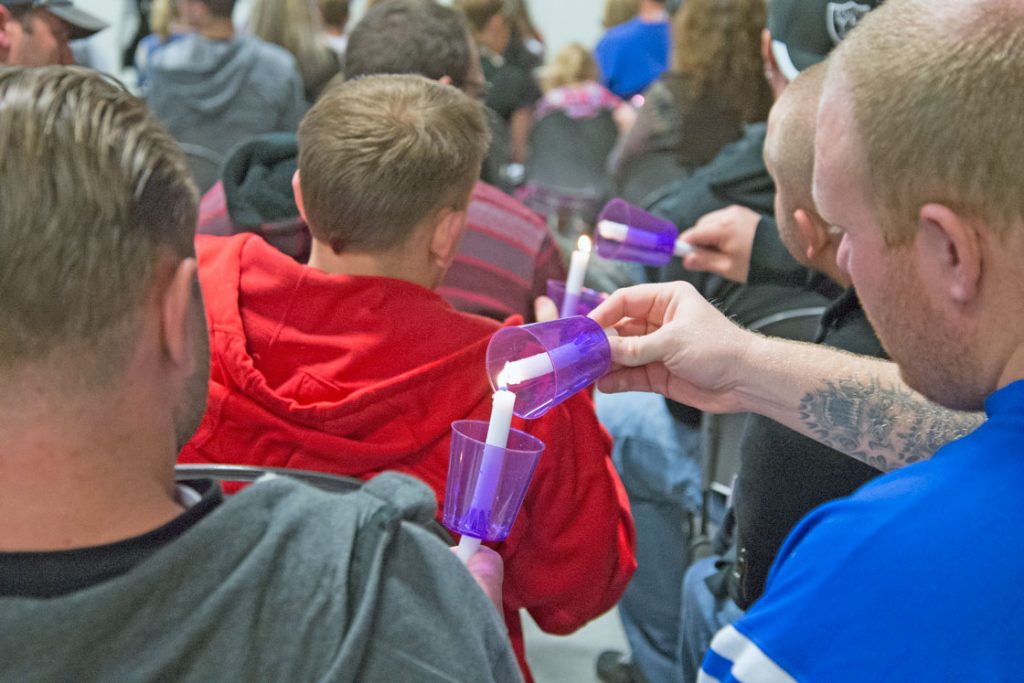 ROCK SPRINGS – Since 1985, an estimated 63 Wyoming women, seven men, four boys and one girl have been murdered as a result of domestic violence. On Thursday, the Sweetwater County Family Justice Center recognized local lives lost.

As domestic violence awareness month comes to a conclusion, victims, survivors and other residents gathered at Bunning Hall for the 21st annual candlelight vigil and silent witness memorial. As Director of the Sweetwater County Family Justice Center Aimee Gatzke said Thursday night, domestic violence is more than just physical violence and it does not discriminate.

One in four women and one in seven men will be victims of domestic violence. Since 2003, 18,000 women have been killed in domestic disputes in the United States. Three women are killed every day in the US by current or former male partners.

Domestic Violence is a problem Sweetwater County is familiar with. In 2014 alone, 225 domestic violence cases were reported in the county.

Those remembered Thursday night showed the devastating impacts of domestic violence. Heather McWilliams was 22-years-old when she lost her life on Dec. 22, 1991. McWilliams and her brother were shot by her boyfriend Michael Rayborn. After the shooting, Rayborn also took her two-week-old child. Rayborn pled guilty to two counts of first-degree murder and is currently at the Wyoming State Penitentiary.

Adam Douglas Franklin was seven-years-old when his short life ended tragically on Valentine’s Day in 1992. Adam’s mother worked the night shift at the Rock Springs Post Office and Adam was left in the care of his stepfather, Alan Suliber.

The next morning, Adam was found lying dead on his bedroom floor among his toys. The investigation found his death was a result of several blunt impacts to his head with death coming as long as two hours following the injuries.

Suliber is also servicing a life sentence at the Wyoming State Penitentiary.

Laura Bossa, a Green River resident, lost her life on July 20, 1994. She was 20-years-old when her life was cut short. Laura was nursing her 19 day-old infant daughter when her husband came in with a gun. As she bent over to protect their child, she was shot in the top of her head.

“We as Laura’s family hope and pray that her death will stand as a silent witness that woman everywhere will someday never have to be afraid of being beaten or murdered by their spouse,” Laura’s mother Melanie Sporich said.

Her husband Grant Bossa was convicted on second-degree murder and was released on parole June 6, 2012. He will be discharged around 2016.

Debra Mott, age 40, was killed Oct. 9, 1997 at Point of Rocks. She was stabbed several times by her husband John Reinhold. John pled guilty to second-degree murder and was released on parole on June 16, 2014.

Another Green River resident, 21-year-old Leysa Bernal was shot twice in the face by her ex-boyfriend Lawrence Howard at her mother’s home. Along with her mother Chris, her sister Crista and Leysa’s son Michael were present. She had an order of protection for both her and her son.

“Looking at little Michael really bothers us because he has no parents and two young lives were wasted for no reason,” Chris said.

Howard committed suicide at the state prison and was buried on Leysa’s birthday.

Keri Ryan lost her life at the age of 22 on Dec. 11, 1996, after being shot in the neck by her husband Roy Ryan. The couple had three children together.

“Keri helped me coach Special Olympics in 1991-1993,” Keri’s mother Barbara Wilkinson said. “She worked well with handicapped children. Keri also worked for Southwest Rehabilitation Center where she continued to work with handicapped people. Keri was my best friend. She loved the Lord and have very many friends who love a miss her.”

While the stories are unique in each case, the tragic result is the same. Other speakers included family of those lost and a local woman who was a survivor of domestic abuse. She told of how she was basically held captive and explained how her husband ran everyone important out of her life. After years of abuse, she reached out to the local safe house who she credits for saving her life.

A common theme ran throughout the night. One by one each person who spoke said if you know someone who is being abused to speak out. Speakers also urged those involved in domestic abuse to reach out for help before it is too late.

Support the fighters, admire the survivors, honor the taken and never ever give up hope.