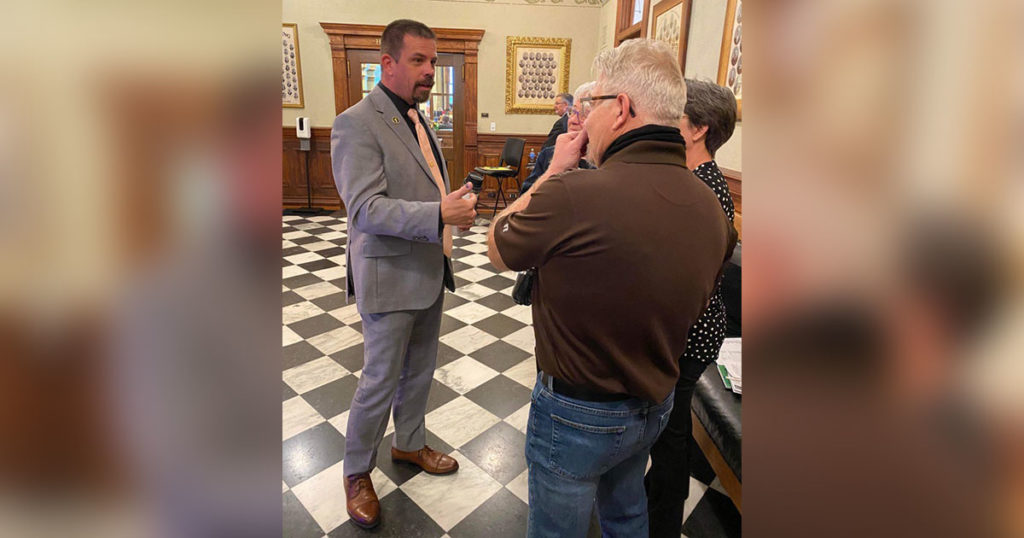 “I am driven by a sense of service to my wife and children, to my country, and my community, and I am committed to bringing that dedication, once again, to Cheyenne,” Burt said. “I was born in Minnesota, where my parents taught me the value of service, work ethic, and respect for others, principles that I carry with me today.”

“Like so many young men and women in Wyoming, I enlisted to serve in the armed forces and joined the United States Marine Corps when I was 22 years old,” he said.

Burt was stationed in Okinawa, Japan. After concluding his service with the Marines, he was offered the opportunity to work in the oilfields in Wyoming in 2009, and Wyoming became his forever home. Burt works for Union Pacific, and volunteers his time in the community working to support fellow veterans however he can.

“In 2020 you elected me to bring new ideas and a new voice to the table. I believe that I have done that well,” he said.

“My colleagues know that I am firm in my beliefs that free markets and free people are what create prosperity and increase quality of life. They also know that I will listen to their arguments and always treat them with respect, even when we disagree,” Burt said. “That’s why, as a first-term legislator, I was able to pass the first tripartisan legislation that will reduce regulations on equipment that disabled people use and on the businesses that sell that equipment right here in Sweetwater County.”

Burt is dedicated to fairness and integrity in all of the laws, for the people, for Wyoming businesses, and for elections. He has brought innovative solutions to the table to make elections fairer. Because of his work, Burt was honored with an appointment to the influential Corporations, Elections, and Political Subdivisions Committee, a position that is very rarely given to first-term legislators.

“I am running again to represent all of my constituents and stand firm on my principles. I’m a free agent, willing to work with anyone who wants to make Wyoming a better, more prosperous, more secure place. I will explore any idea that makes Wyomingites more free,” he said.