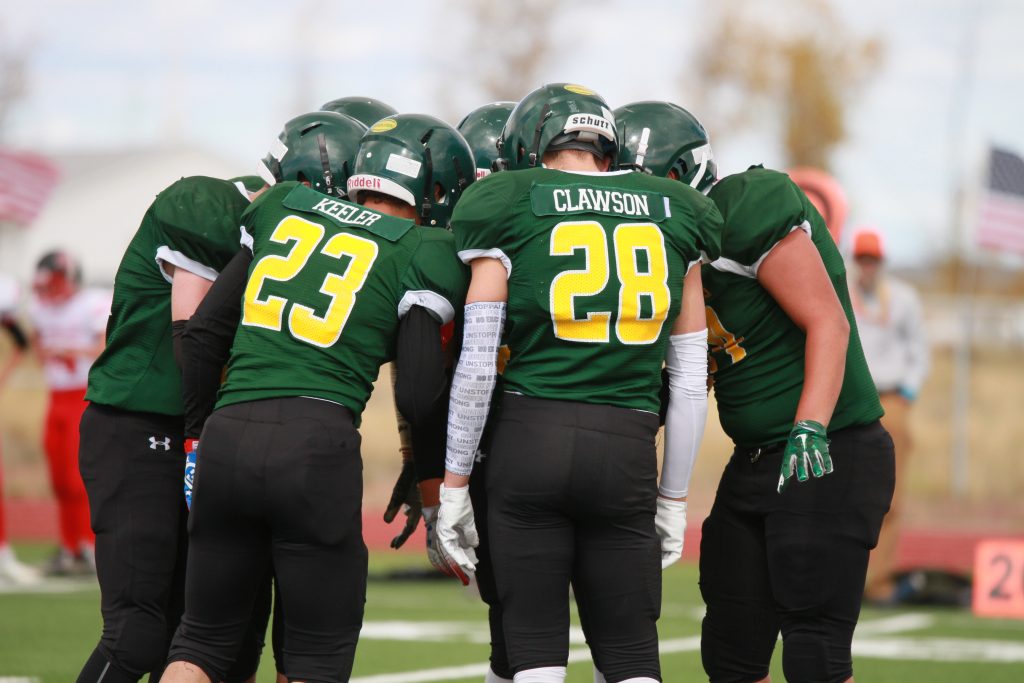 Farson-Eden's offense huddles up during a game against the Riverside Rebels. Photo by Brayden Flack.

FARSON — In 2017, the Farson-Eden Pronghorns football team stepped onto Farson’s Football Field for the very first time. The artificial turf represented the dawn of a new era of Pronghorn football. Fast forward to October 2019, and the Pronghorns hold the longest active win streak in all of Wyoming high school football at 16 and counting. But in order to fully appreciate how the tightly knit community of Farson has established itself as a top dog in six-man football, one has to first learn of the great trials that have faced the football program throughout the years.

When the Farson restarted its football program, the team had very little to work with. Across county road 28, opposite of Farson’s Football Field, sits a lone baseball field that blankly stares each Friday afternoon as the Pronghorns take the field against their competition. In a symbolic sense, the baseball diamond is a reminder of humble beginnings; it served as a practice field when the program started back up in 2009.

But before the football team had any relationship with the baseball field, a trying history ties itself to a time where football was the last thing on the minds of local residents.

The first season in Farson’s history dates back to 1938. While team records indicate wins and losses throughout the years, nobody bothered to keep track of who took the job as the first head coach. The “unknown” coach fittingly spilled his title onto a program that quickly became unknown and unpopular.

A total of eight wins were recorded by the football team through 1951. From 1952 to 1957, the Pronghorns found another five victories but couldn’t put a team together in 1952 or 1954. While most seasons only consisted of one or two games a season, the habit of losing carried weighed heavily on the program. After the 1957 season, the sport stepped aside after many unsuccessful seasons in the rural town.

Twenty-eight years passed until the Pronghorns reintroduced the high school football team. In 1987, Farson brought back the team for what ended up being the most successful age of Pronghorn football at the time. The team secured a total of 10 wins in four years before again suspending football from the school’s athletic programs. Another dark age insued in 1991, until football was eventually restored in 2009.

In 81 total years, the Pronghorns have played 32 seasons with 20 of those seasons stamped as losing years for the team.

A Diamond in the Rough

Diamonds are formed deep beneath the earth’s crust under intense heat and pressure. That’s a perfect analogy to describe the Pronghorns football team.

Current head coach Marvin “Trip” Applequist would be the first to deny his influence in the success story of Farson’s great turnaround as a football program. Spectators would agree that Applequist’s quiet demeanor is noticeable during games every Friday afternoon. A man of few words is a man whose thoughts are many. The silent head coach has discovered the diamond in the Eden Valley.

When Applequist first took the head coaching job, the coaching switch appeared to be in vain as the Pronghorns went 0-8 in his first year. But Applequist continued to believe in his team. Coupled with hard work and determination, the team progressed each year and eventually brought back their first state championship trophy in 2018.

The coach has seemingly transformed Farson into a winning machine — a sought after standard in six-man football. However, Applequist is not the only force behind the beautiful transformation of the program.

Without the Young American Football League (YAFL) in Rock Springs, Farson’s football program would be far from where it is today.

The 2018 senior class had the advantage of learning how to play football from a young age. Skills, technique and football IQ changed the entirety of Farson’s football program. Reed claimed that group of seniors didn’t get scored on in eighth grade. Two schools even cancelled games against Farson because they didn’t want to play against them. Reed said that’s when he knew “things had changed.”

The YAFL continues to host young Farson athletes on its fields every season. Reed said that it has now become a tradition and is the main culprit behind the winning tradition that is being built.

In addition, the community’s change of heart compared to previous years has also influenced the program’s success story.

“The community is awesome. They step up for everything. They are back behind these boys one-hundred percent,” Reed said.

With the momentum now on their side, the Pronghorns have a brighter future than ever before imagined. What once used to be an afterthought has now taken center stage. Another championship is within reach this season.

“We’ve got this big group of juniors and I think we can do it again. We just have to keep fighting and getting better,” Reed said.