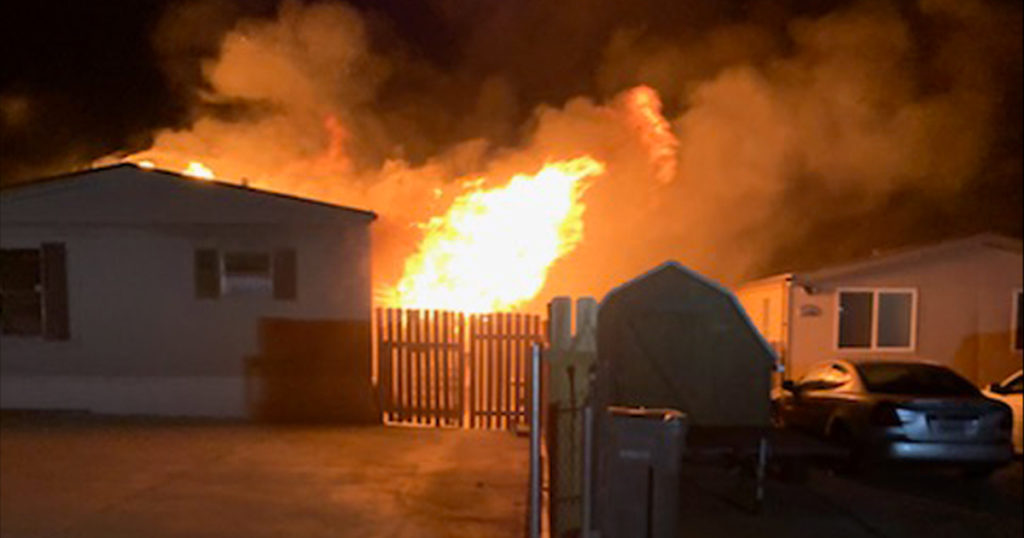 Residents living at the location on Hillview Drive were not at home when the fire began sometime around 10 p.m. last night. Sweetwater County Fire District No. 1 photo

According to Sweetwater County Fire District No. 1 Battalion Chief Dallas Buller, the fire started around 10 p.m. Thursday at 109 B Hillview Drive in the Clearview Acres neighborhood.

When firefighters arrived the home was completely engulfed in flames, Buller said. The fire had already worked its way from the left side of the house to the right and was threatening a house next to it, he added. With a quick response, firefighters prevented the fire from reaching another home.

Only the family dog was home at the time of the fire and firefighters successfully saved the dog, he said. The other residents who lived in the double-wide mobile home were working at the time.

The structure and the contents are basically a total loss.

Photos by Sweetwater County Fire District No. 1 and SweetwaterNOW

While it was clear to firefighters the cause of the fire was due to an electrical problem inside of the home, they do not know what specifically caused it, Buller said.

District No. 1 responded to the fire with five apparatus on the scene and requested back up from the Rock Springs Fire Department. The RSFD brought two more apparatus to the fire.