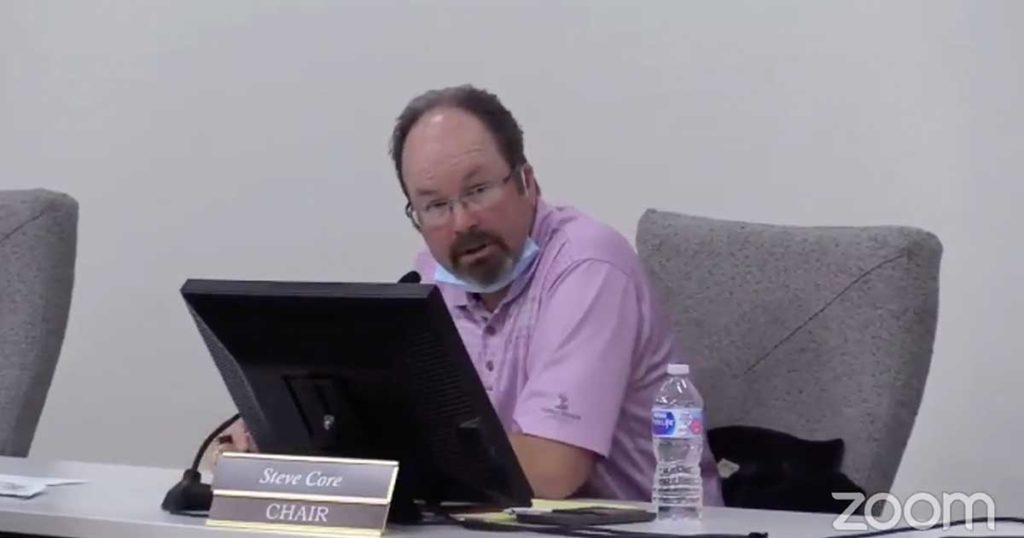 SCSD No. 2 Board Chairman Steve Core during the February 9 school board meeting.

GREEN RIVER — Sweetwater County School District (SCSD) No. 2 Business Manager Chris Dean informed the SCSD No. 2 Board of Trustees during their meeting Tuesday night of some legislation that would impact education funding if passed.

Dean previously spoke about HB 61 during the January meeting, which outlines modifications to the Wyoming education resource block grant model in the form of a $100 million cut to the legislative model statewide for FY 2022.

This bill enacts the education funding model formula as used in fiscal year 2021 and reduces the computation of the foundation program amount by $100 million in FY 2022 and each year thereafter.

Dean said in January that cutting education funding model by this amount equates to about $1,000 per student in the state of Wyoming, which is a 6.5 percent decrease in funding.

However, since then two other bills have been introduced that are aimed at education funding. HB 89 deals with school finances and HB 77 would reorganize school districts across the state.

According to Dean, HB 89 proposes a 10 percent cut to administrators’ pay and a 50 percent cut to activity funding. The bill also suggests reducing staff’s personal development days from 10 to five, which would cut their contracts down by five days. Lastly, the bill proposes the elimination of funding for all instructional facilitators.

Dean said other bills targeted at public education include: SF 79, which proposes the implementation of medicaid billing for school-based services; Senate Joint Resolution 001, which would change the Wyoming Constitution to state that any Wyoming tax increases would be voted on by the electors; and House Joint Resolution 003, which would increase state land mineral royalties that go to public education funding from one-third to two-thirds for six years, 2023-2029.

According to Dean, the state’s Education Committee will be meeting for up to three days during the week of February 22, and there will be an opportunity for testimony during that time.