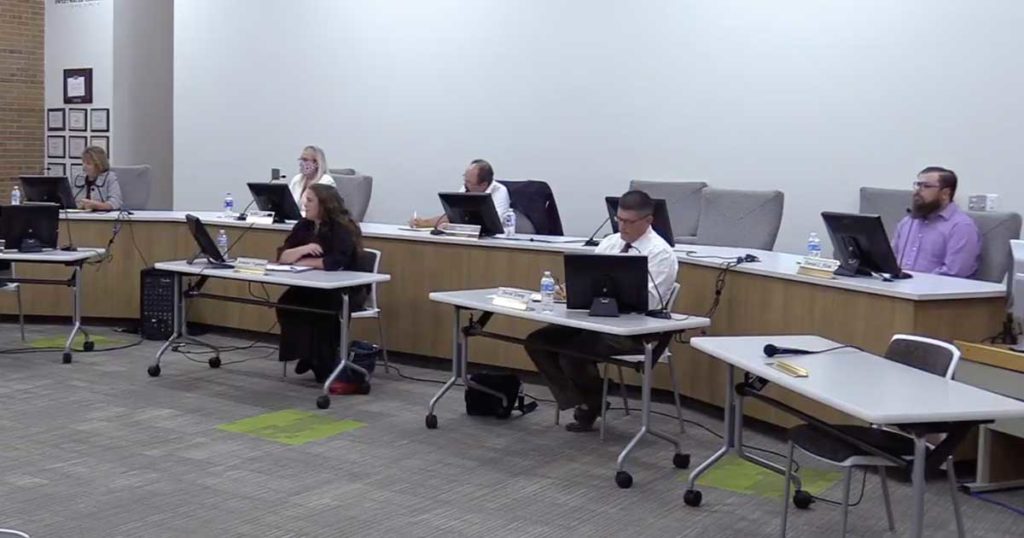 The Board of Trustees has four available spots this year with 10 candidates running. Six of the 10 candidates were present at the forum: incumbents Steve Core, current Chairperson, and Brenda Roosa; and new candidates Robbie de Leur, Jennifer Figenser, David Young, and Daniel Flom.

Candidates who were not present at the forum were incumbent Mark Sanders, and new candidates Debra Barton, Cristy Pelham, and Danielle Salas.

The candidates were asked five questions each.

In the past five years, what has been your level of involvement in SCSD No. 2?

Core and Roosa both said they have been “heavily involved” in the district due to their positions on the school board and Rec Board.

Core said he is the current board chair, and was the voice of the Wolves on the Radio Network up until this current school year, so he was present at basketball and football games. He said he loves to attend Truman luncheons with his grandkids.

Roosa said in addition to being on the board, she has served on the Wyoming School Board Association for the past three years, in which she advocates for SCSD No. 2 at the state level. She said she also attends luncheons at the elementary schools and award ceremonies across the district. Roosa also said she attended a Professional Learning Community (PLC) training in Las Vegas so she can understand what is expected of certified staff.

Flom and Young both said their primary involvement with the district has been through their children. Flom said he has helped out in the pre-K system and has taken it upon himself to learn about the system for his own son.

Young said he has donated some time to the district and has acted as a representative of TATA Chemicals as they have made donations to the school district. He said he looks forward to being able to dedicate more time to SCSD No. 2.

De Leur said her involvement with the district in the last five years has included judging last year’s Speech and Debate tournament, and she has been to a number of school board meetings.

Figenser said through her children, she has attended several drama and choir presentations. She also served as the Assistant Director at the Child Development Center and she attended the public forums for the superintendent search last year. Additionally, she said she has substituted in nearly every school in the district and oversaw a student teacher at Truman Elementary.

As a school board member, how would you ensure our schools are preparing students for continued education or the work force?

De Leur said her background is in higher education so she understands the need to teach kids what their opportunities are for the future. However, she said college isn’t for everyone and the district needs to be able to recognize that. She said testing is able to identify which students are performing well, but that they need to offer opportunities to students who are not performing as well through innovation and new technology.

Figenser said she felt confident that the school board and Superintendent Craig Barringer have a good direction in preparing students for after graduation. She said she is also focused on ensuring students’ mental and emotional health are prepared for further education or the work force.

Core said he would continue to support programs and work that’s already in place. He said Green River High School (GRHS) recently made changes for improvement and he believes those will be successful. He also said GRHS can work with the Sweetwater Economic Development Coalition and local industry such as the trona mines to ensure students are being prepared for the local workforce.

Flom and Roosa both said they would continue to support the dual and concurrent enrollment with Western Wyoming Community College, in which high school students can earn college credits while still in high school. They both also added the industrial arts programs within the schools are important in providing education and experience to students for the workforce.

Roosa said with budget cuts looming, she would like to ensure those programs do not take the hit.

Young said he would like to see the district help students identify what they want to do and help them identify their opportunities at an early age.

What is the biggest issue facing SCSD No. 2?

Each of the candidates said the biggest issue is the upcoming budget cuts. According to Core and Roosa, Governor Mark Gordon is requesting a 10 percent cut, which is about $4.2 million in SCSD No. 2. They said 80 percent of the district’s budget goes toward personnel, so cutting supplies, for example, will not suffice.

Roosa emphasized the importance of working with the Wyoming Legislature and advocating for SCSD No. 2’s needs.

Young said the board will need to understand the budget and be able to make difficult decisions that prioritize students and staff.

Flom and Figenser both said the board will need to be creative with the budget. Figenser added that she is from Colorado, and that gives her experience with these types of budget cuts in the past.

Core and de Leur both noted that though the budget is a concern, getting through the unknowns of the COVID-19 Coronavirus are also a big issue. De Leur said with kids having to navigate changes in social interactions, wearing masks, and going from online schooling to summer break to being back in the classroom, they need to ensure the kids are well-rounded.

De Leur and Core said the state is constitutionally required, through the Wyoming Constitution, to fund education first before anything else.

Revenues are currently challenged due to the current economic situation. How can the board promote funding for our schools?

Roosa once again emphasized the importance of advocating at the state level, as it is the state legislators’ job to find answers to how to bring in revenue. She suggested possible taxes that don’t affect residents, much like the lodging tax.

Flom again said the school board will need to come up with creative solutions to encourage the state to either generate more revenue or to bring more money back from Cheyenne to SCSD No. 2.

Core said the state is losing some legislators who have been “anti-education”, which he believes will be a good thing for the state to find more options for bringing in revenue for education. He reiterated that the state must fund schools before anything else. Core added the state and Sweetwater County need to recruit business to the area to increase revenue.

Young said building and continuing relationships with state lawmakers will be important, as well as learning from other states and school districts who have faced similar revenue issues in the past.

Figenser also said relationships are key, but at a local level. With improving relationships between teachers and students, parents, and the community, they may be able to bring in some homeschool kids. She also said they should seek grant funding and they need to avoid cutting the arts.

De Leur believes the revenue issue is “pure economics” that can only be solved by increasing revenue or decreasing costs. She once again stated that due to the Wyoming Constitution, the state is mandated to fund education first. Additionally, she said there should be an effort to find grants to help bring in money. She also said the district should look at open positions within the staff and make decisions on whether to fill them or not. Lastly, she said they need to bring in business to increase student enrollment so they will receive additional funding.

How much oversight should the board have over teacher performance?

Young noted that oversight starts with the hiring process. He said when the district hires great people, they can govern themselves and the board is not needed to oversee direct performance of teachers.

Watch the full SCSD No. 2 school board candidate forum below.