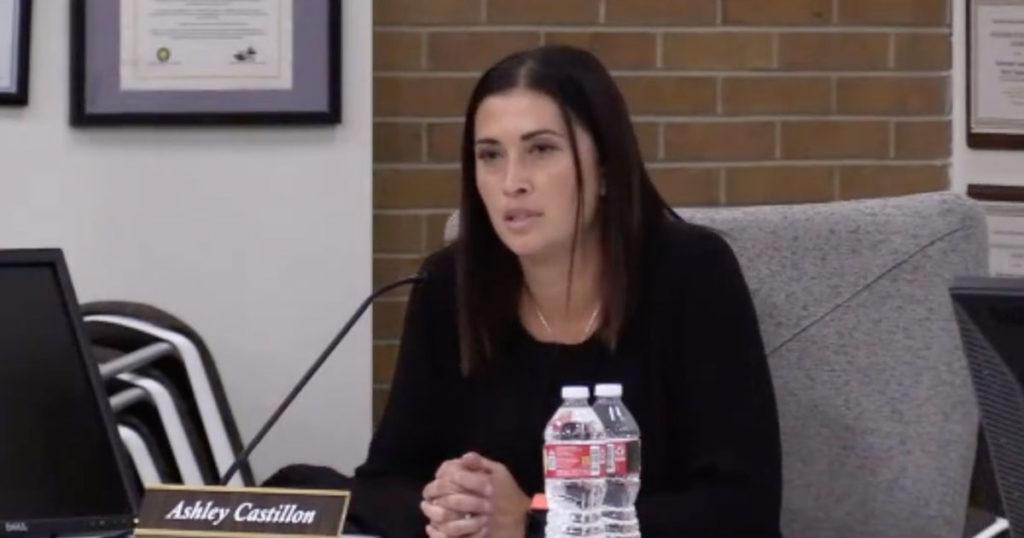 Ashley Castillon was one of the four candidates to participate in the Sweetwater County School District No. 2 political forum Monday night. Zoom photo

GREEN RIVER — The Sweetwater County School District (SCSD) No. 2 Board of Trustees candidates discussed what they believe to be the most pressing issues facing the district during the SCSD No. 2 political forum Monday night.

The Green River Chamber of Commerce hosted the forum which was joined by candidates Ashley Castillon, Tom Wilson, Justin Sax, and Daniel Flom. Castillon has served one term on the board, while Wilson filled a vacancy in February, and Flom was appointed to the board in August. The candidates are vying for three positions on the school board.

Each of the candidates have had varying degrees of involvement with the district. Sax and Flom both said their involvement comes from their children being enrolled in the district. Castillon said in addition to her kids going to school in the district, she has also volunteered for many different activities and sports teams. Wilson said his involvement includes working in the district as a welding teacher, administrator, coach, and activity director throughout his career.

All four candidates agreed that funding is one of, if not the biggest issue facing the district. Castillon, Wilson, and Sax also noted that teacher recruitment and retention is also a major issue. Wilson and Sax further said that school safety is a big issue.

The candidates all agreed the biggest issue facing the district is funding. Wilson pointed out that the district just joined the Wyoming Education Association’s lawsuit against the state for inadequate funding of public schools. He added that the Elementary and Secondary School Emergency Relief (ESSER) funds the district has been using must be spent by 2024. This leaves funding sources up in the air for the future.

Castillon said that while the COVID-19 ESSER funds have covered some shortfalls, it does not provide a long-term funding source. She said the district needs to talk to legislators, and particularly the ones who don’t show up for educational forums, and explain how the funding model works for the school district.

Flom added that the funding model is very complex and that money is allocated to specific places. This means that one area of the budget may have excess funds compared to other areas, but it can’t be spent elsewhere. Wilson said that the school district should educate teachers, staff, and the community about the budget so this issue of allocation is understood.

Wilson added that the funding model has not been adjusted since 2012, while $39 million of the $61 million budget comes from it. He said the model needs to be adjusted, otherwise it’s school programs that take the hit.

Sax noted that the community needs to reconsider who they vote for. He said that if a candidate says they are against new taxes, but then say they want to fund education, people must ask the question of how they plan to do that.

He said the district also needs to be better at spending money that they do have in addition to petitioning the legislature for more funding.

Sax and Flom both noted that the district needs to find a funding model that does not rely so much on the mineral extraction industry.

Castillon said it goes back to school funding, as with the current funding model they cannot pay teachers more. This makes having educated and trained teachers join the staff and stay with the district difficult.

Sax added that COVID-19 proved to be tough on teachers and that teachers had to take on many things not related to teaching. He believes putting responsibilities outside of teaching on teachers makes it difficult to retain them. He additionally commended the teachers who did stick it out throughout and after COVID-19.

He further noted that school safety is an unfortunate but real issue in this district and across the nation. Sax said that as a military man, he does not believe teachers should have guns in schools. He said that low-trained individuals in terms of firearms should not be armed in schools.

Wilson also mentioned school safety as a big issue for him. While education is why kids go to school, Wilson said it is just as important to ensure that kids are safe at school and get back home to their families every afternoon.

The candidates also discussed how best to prepare students for further education and the workforce. This discussion included talks of getting students hands-on experience in potential industry careers, field trips to universities and local industries, continuing the concurrent enrollment so students can earn college credits in high school, and providing students with basic life skills and giving them the tools to use them, as well as holding them accountable in regards to these skills.

To watch the forum in its entirety, click here.