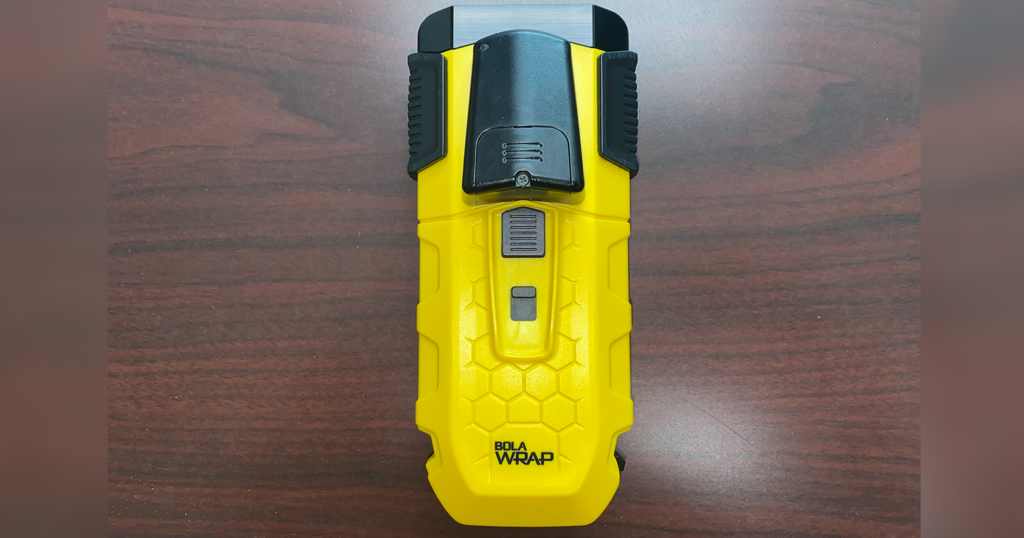 Similar to handcuffs, the BolaWrap is a hand-held remote restraint device that uses a partially charged .380-caliber blank cartridge to discharge an eight-foot-long Kevlar cord with four-pronged hooks on each end that wraps around a subject’s torso or legs from up to 25 feet away. The tether restricts the movement of the person’s legs or arms, effectively immobilizing them and allowing deputies to safely handle them without inflicting pain to achieve compliance.

Developed in 2016 and brought to market in 2018, its creators envisioned the BolaWrap as a nonlethal device that does not rely on pain compliance to be effective. While it was originally designed to be used as an early intervention tool in dealing with those suffering from a mental health crisis, the BolaWrap has now also been used to successfully deescalate violent encounters between law enforcement and combative criminal suspects across the country. There are currently more than 230 law enforcement agencies in 46 states who are carrying the BolaWrap.

“We owe it to our deputies and the community we serve to explore and pursue the latest in public safety
technology, ” said Sheriff John Grossnickle.

While it won’t work in every situation, Grossnickle likes that there is a minimal use of force and that it doesn’t rely on pain compliance.

“It gives our deputies another option in safely dealing with someone who is noncompliant, without having to resort to using higher levels of force and while reducing the chance of injury to everyone involved,” Grossnickle said. “We look forward to to putting this new tool through its paces in the field and determining whether it’s an effective and viable option for us moving forward.”