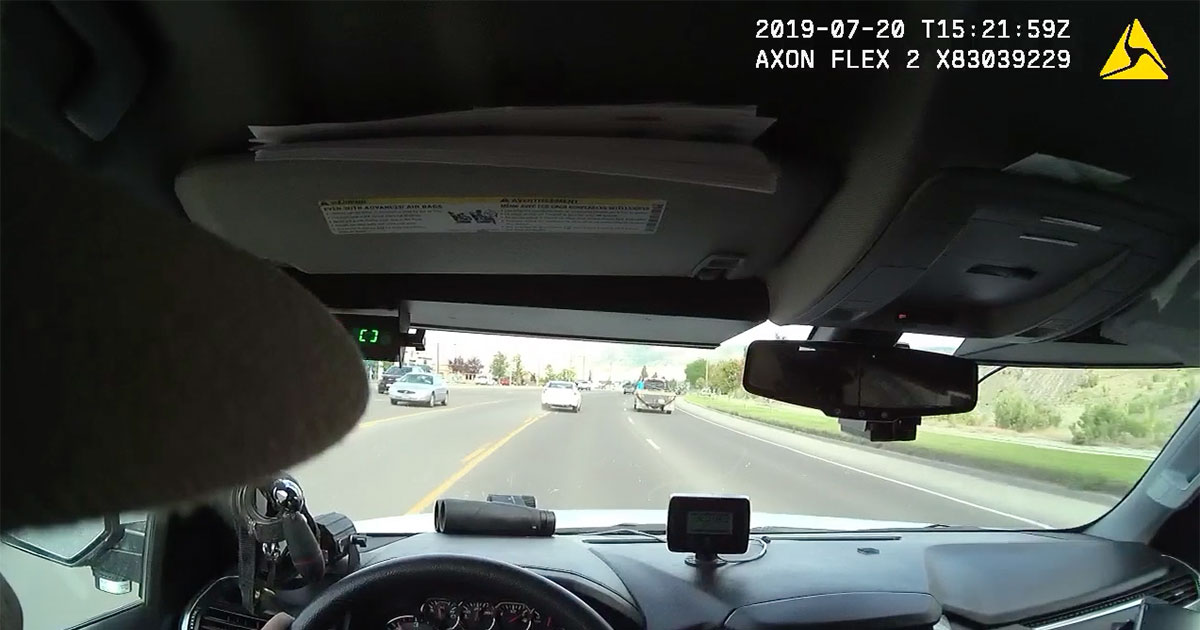 SWEETWATER COUNTY– On Saturday, July 20, 2019, at approximately 9:15 am, sheriff’s deputies responded to the area of Elk Street and Yellowstone Road in Rock Springs to assist an officer from Rock Springs Police Department in locating a vehicle that failed to stop during an attempted traffic stop and that was possibly attempting to flee from police.

Minutes later, a deputy located the suspect vehicle, a white Chevy Impala, on Elk near Stagecoach, traveling southbound at an excessive rate of speed. After the deputy activated the patrol vehicle’s emergency lights and sirens, the white Impala’s driver again refused to stop and continued to attempt to elude law enforcement.

After pursuing the suspect vehicle for over 15 miles through Rock Springs and toward Green River, the car was eventually stopped on Interstate 80 (I-80) West by the Green River tunnels near mile marker 90 with the help of the successful deployment of a tire inflation device by officers from Green River Police Department and a commercial truck driver who partially blocked the road for deputies at the mouth of the westbound tunnel.

While sheriff’s deputies arrested the Impala’s driver at the conclusion of the pursuit without injury or further incident, the investigation into this matter remains active and ongoing.

The Sheriff’s Office is asking for the public’s help in identifying any further eyewitnesses to this event and in providing any further information relevant to this investigation.

In coordination with Sweetwater County Attorney’s Office, the Sheriff’s Office is releasing a brief portion of body camera footage captured by a sheriff’s deputy during this incident to accompany this media release. This video footage depicts the white Impala entering the median on Dewar Drive, near Winston Drive, before veering into and swerving across oncoming traffic lanes. The car then drifts head-on toward, what looks like, a dark-green Dodge Dakota pickup (or similar), seemingly forcing the pickup’s driver to slow and begin moving into the adjoining lane of travel. The white car then cuts in front of and accelerates away from the oncoming truck, momentarily returning back into the proper lane of travel.

The Sheriff’s Office strongly encourages anyone with information as to the identity of the driver or occupants of the pickup truck captured in this video, along with any other involved motorists who were traveling on Yellowstone, Elk, Center, Dewar or I-80 at the time of this incident, to please contact Sergeant Steve Paladino by phone at (307) 922-5339.

Sweetwater County Sheriff’s Office cautions the public that body-worn cameras are merely one of many investigative tools. Like any device, they have limitations; body-worn or vehicle-dash cameras do not necessarily capture everything an officer sees just as they may capture something an officer does not see at the time

Moreover, video cameras do not have the ability to depict everything that an officer reasonably believes or experiences during a given incident. Sweetwater County Sheriff’s Office also reminds everyone that all persons suspected or alleged of criminal misconduct, implied or otherwise, are presumed innocent until proven guilty in accordance with law.