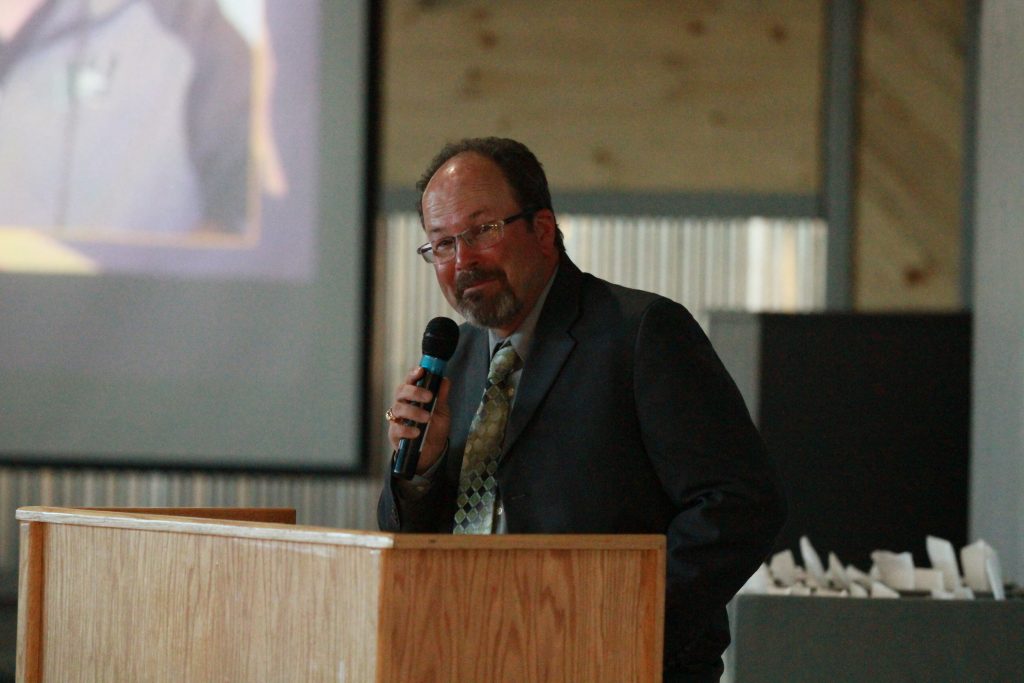 GREEN RIVER — Local Green River sports broadcaster, Steve Core, was recognized and inducted into the Wyoming Association of Broadcasting Hall of Fame on Saturday night in Green River at the Pavilion.

Joined by his parents, family and friends, Core reflected on his career and memories in broadcasting and those that helped him along the way.

With 40 years in the business, Core’s accomplishments in the broadcasting business and service throughout the years earned him a spot in the Hall of Fame.

“It’s the ultimate reward for what I do,” Core said.

In August of 2018, Core was attending a the summer board meeting for the WAB. He has served two terms for the WAB board and currently serves as the chairman. It was there at that meeting that Core found out in surprising fashion that he would be the next Hall of Fame inductee.

“I didn’t even know it was coming,” Core said. “They just made a motion to put me in the Hall, seconded it, and it was over with. I was really surprised by that.”

Throughout Core’s career many awards and accolades have found a home at his office at The Radio Network. In 2018, he was named Green River’s Distinguished Citizen of the Year. But among most notable award he has recieved in his broadcasting career, the Wyoming Sportscaster of the Year award takes the top spot. He has been given the award three times from the National Sports Media Association.

A Trip Down Memory Lane

Core graduated from the University of Wyoming and shortly after moved to Green River where he has flourished a colorful career. The main reason Core’s career in broadcasting has been so successful is because of Al and Faith Harris who took a chance on the young college graduate.

“You’ve really got to put a finger on Al and Faith Harris. They took a chance on me coming out of college in 1985. Their loyalty to me and my loyalty to them has been the reason I’ve been in the business for 40 years.”

Since the beginning of his career, Core is now best known as the “voice of the Green River Wolves.” Play-by-play broadcasting for the Wolves is one of the great joys Core has found as a broadcaster, and the nickname has become a household name for listeners near and far.

Green River is scheduled to play Torrington this coming fall. The game will mark the 300th Wolves football game that Core has been a part of. In his 34 years of broadcasting, he has not missed a home football game.

Out of the numerous memories that Core has made behind the microphone, the 2004 State football game is among the fondest moment of his broadcasting career. Green River went on to win a state title that year and his son, Patrick, was an All-State wide receiver for the Wolves that year. Despite the role he played as the “voice of the Wolves,” Core wishes he could go back and be a dad in that moment instead.

The other cherished part of his elegant career is the lesson he learned that in order to make a difference in the community you have to get out and be a part of the community.

“To make your community better you’ve got to be involved. You can’t just sit on the sidelines,” Core said. “The broadcasting business has allowed me to be involved with the community and I plan to continue to do that as long as I am able to.”

Core turns 57-years-old on July 2, 2019. The goal right now is to finish out another seven years before enjoying retirement. For now, he hopes to continue working his magic for his listeners.

“The goal is to just continue to do what I do and try to do it the best I can,” Core said.