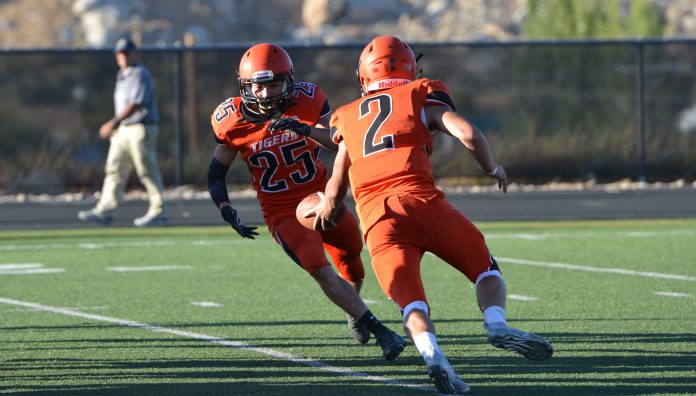 The Tigers led the first half of the game, but turnovers would ultimately be the deciding factor in the Thunderbirds’ victory over Rock Springs.

The first possession for the Rock Springs Tigers could not have been scripted in a more perfect way. Five first downs and an 80-yard drive would equate in a touchdown run by Favor Okere. The execution by Rock Springs chewed up nearly 10 minutes off of the clock and gave the Tigers an 8-0 lead.

Looking to respond to the score, Cheyenne East was forced off the field in less than a minute. Rock Springs’ defense stunned the Thunderbirds’ offense which resulted in a three and out.

East’s offense did not find rhythm until the second quarter. Quarterback Grayden Buel found one of his receivers open in the middle of the endzone for an easy touchdown to cut the Rock Springs lead 8-7.

Rock Springs put together one more drive towards the end of the half but ended any chance to score before halftime by throwing an interception to the Thunderbirds with 53 seconds left in the half. The Tigers went into halftime with a one point lead over East.

East’s first drive of the second half gave the Thunderbirds the first lead of the game on a 17-yard field goal to make it 10-8.

The Thunderbirds wouldn’t take long to find more points. Rock Springs’ following drive ended on a fumble by Coleman Welsh that was picked up by East’s defense and returned for a touchdown.

On the ensuing drive after the costly mistake, Rock Springs’ Brendan Jassman coughed up the ball. East capitalized on the turnover and scored another touchdown to bring the Thunderbirds’ lead 24-8.

Okere did manage to find the endzone for a second time on a 25-yard touchdown pass from Justis Reese. The late fourth quarter effort would ease the bleeding, but with only 33 seconds left, the Thunderbirds recovered the onside kick and ran the clock out to end the game with a final score of 24-16.

First ranked Natrona will face off with the Tigers for the final game of the regular season. By winning the game, Rock Springs guarantees to extend play into the postseason.

The Mustangs and Tigers will kickoff next Friday at 6:00 p.m. at Tiger Stadium.