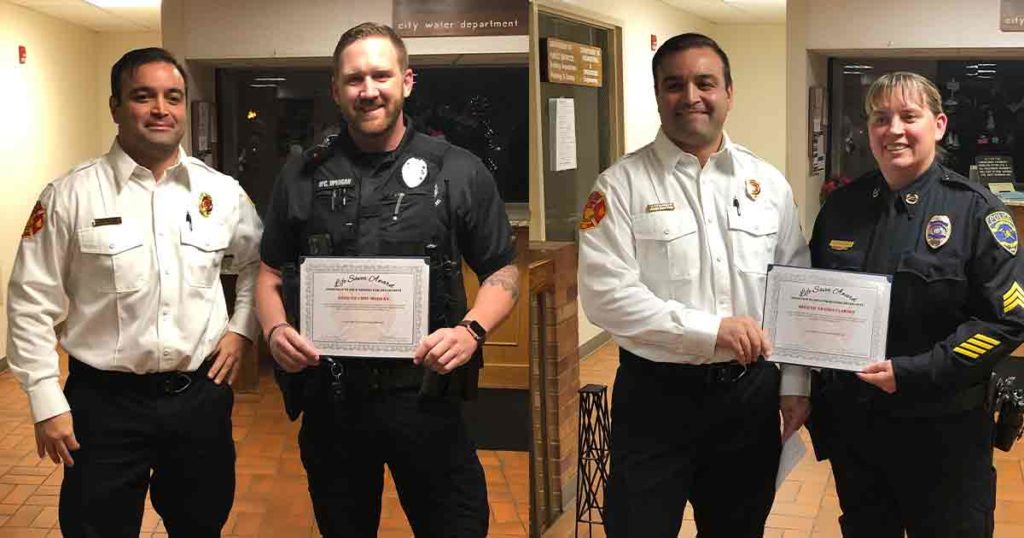 Both Officer Morgan and Sgt. Clawson received standing ovations and applause after they were presented with their awards at the Council meeting.

On October 27, the RSFD was dispatched for a patient who was not breathing and unconscious at BR Checkholders, which is currently a vacant business. Officer Morgan arrived on scene, investigated and determined the correct location of the emergency. He then radioed to dispatch, initiated CPR and activated his patrol AED, delivering a successful shock to the unresponsive patient.

The RSFD then arrived on scene and was briefed by Officer Morgan and assumed patient care. The patient had a pulse and RSFD assisted her breathing. The patient was transported to the Memorial Hospital of Sweetwater County were she later recovered and was discharged.

Early access to 911, early CPR, and early defibrillation are three key components of the chain of survival, Chief Wamsley said. When cardiac arrest occurs, for every minute that a shock is not delivered, chances of survival and recovery drop by 10 percent.

“The actions taken by Officer Morgan had a direct and significant impact on the recovery and care of this patient; his actions saved the patient’s life,” Wamsley said.

On September 18 at 2:20 a.m., the RSFD was dispatched to the intersection of Foothill Boulevard and Sierra Road to a report of a motorcycle crash with major injuries. RSFD responded from Headquarters and Fire Station 3 with six personnel.

Upon arrival, the RSFD and Sweetwater Medics assumed care, assessed the patient, and loaded the patient into the ambulance for transport to the hospital.

Without the quick actions of these two officers, these residents may have died. Battalion Chief Kourbelas said it takes the right people, the right equipment and the right training, and Sgt. Clawson had all three of those.

“We are both honored to work alongside our brothers and sisters in the RSPD and grateful to these members of the RSPD for their professionalism and dedication to the welfare of the residents and safety of our community,” Wamsley said.

During the Council meeting, Rock Springs Mayor Tim Kaumo praised Officer Morgan and Sgt. Clawson for a job well done. He said he’s always wondered if the city’s employees have received enough training to perform their duties well and this is proof to him that they do receive the right trainings necessary to perform their jobs at a high standard.

“It’s nice to know that our community is well taken care of,” Mayor Kaumo said.

Congratulations and thank you for your service!