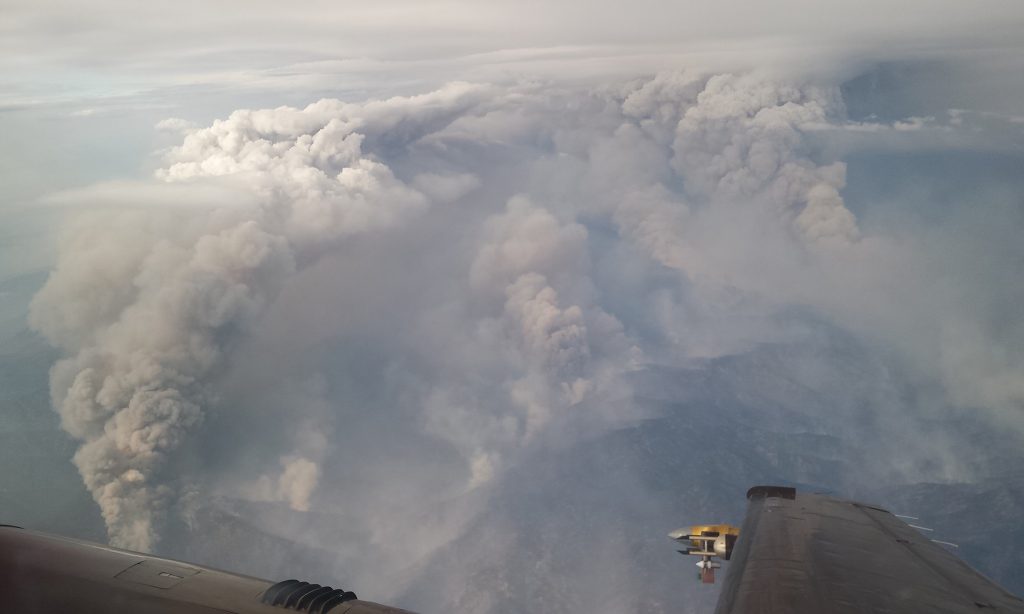 UW’s King Air research aircraft was used to study a massive wildfire in Idaho in 2016. It has returned to that state for a project to measure and analyze wildfire smoke. (Nick Guy Photo)

LARAMIE — In recent years, smoke from wildfires has blanketed many states in the West, and Wyoming is no exception.

But exactly how that smoke affects air quality, climate and weather is the subject of a comprehensive study this summer that includes University of Wyoming Assistant Professor Shane Murphy’s research group.

Murphy, who is a part of the Department of Atmospheric Science in the College of Engineering and Applied Science, is a co-principal investigator for the Western Wildfire Experiment for Cloud Chemistry, Aerosol Absorption and Nitrogen, or WE-CAN (www.eol.ucar.edu/field_projects/we-can).

The study aims to better understand the chemistry of wildfire smoke. It takes place from July 22-Aug. 31 and is based in Boise, Idaho.

“This project grew out of a discussion we had during a tour of the UW flight facility that we gave Dr. Emily Fischer from CSU when she was here visiting for a seminar,” Murphy says. “It’s really amazing how much it expanded into a comprehensive study, from which we’ll learn a ton.”
.

The main objectives of WE-CAN are to identify and quantify emissions from wildfires in Western states and understand how smoke plumes evolve over the first 24 hours of a blaze.

Murphy’s group will be focused on measuring how smoke particles interact with light, which can affect local weather and global climate.

“We have some cutting-edge instrumentation that has been developed in-house here at UW by a collaboration of my group, the UW-King Air Engineering Group and NOAA,” Murphy says. “One of our instruments actually records the sound that particles make when you hit them with a laser. This would seem to be kind of a ridiculous thing to do on a very noisy plane, but it turns out to be one of the only ways to figure out how much light these particles absorb and how much they heat up the atmosphere.

“We have been developing these instruments for years, and it wouldn’t have been possible without an incredible team effort, especially by (atmospheric science Research Scientist) Matt Burkhart and (Postdoctoral Research Associate) Rudra Pokhrel, who have spent many long days in the lab making this a reality.”
.

Effects Across the Globe

Research has indicated exposure to wildfire smoke is associated with adverse health effects for the general public.

In this project, researchers will document the emissions and evolution of air pollutants in smoke plumes.

WE-CAN observations could improve the ability for climatologists to predict storms and rainfall in smoke-filled environments.

Because smoke particles impact local and global climate, observations from WE-CAN will assist in understanding the extent of warming and cooling caused by wildfire particles across the globe.
.

The geographic location makes Boise an ideal base of operations due to its central location to Western wildfires.

As several major wildfires have occurred during July and August in recent years, the expectation is fire activity within a one- to two-hour flight of Boise could be prevalent.

WE-CAN will use the NSF/NCAR C-130 research aircraft to conduct 16-18 research flights near Boise during the six-week project.

The C-130 research aircraft that will be used in the research is owned by the NSF and maintained and operated by the NCAR-EOL. It makes its home in Broomfield, Colo., at Rocky Mountain Metropolitan Airport. The aircraft will carry close to 30 scientific instruments, with room for 18 scientists to fly.

Many others will be on the ground, helping monitor fires, smoke and weather to guide the plane to prime data-collecting zones. They will conduct two types of flight patterns within six-hour flights, multiple times, over six to eight weeks.
.

UW’s King Air research aircraft also is in Idaho for a related project called BB-FLUX, led by Professor Rainer Volkamer of the University of Colorado.

It studies wildfire emissions and the chemistry of secondary smoke plumes in an effort to quantify the emissions to improve the accuracy of computer models.

The King Air plane also is equipped with a suite of instruments to measure aerosols, chemistry and cloud microphysics. Housed in UW’s Donald L. Veal Research Flight Center, Wyoming King Air is the only NSF-supported aircraft facility owned by a university.

It is being used this summer through Sept. 22, with the expectation that it will fly 25 times for a total of 112 hours for the BB-FLUX project.

UW’s aircraft, along with the NCAR C-130, will be featured during a public open house Saturday, Aug. 11, at the Boise Airport.

At the open house, visitors will have the opportunity to board both aircraft; learn about the impacts wildfires have on the environment and public health; and talk with mission scientists, engineers and other project staff. 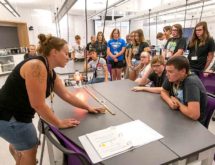