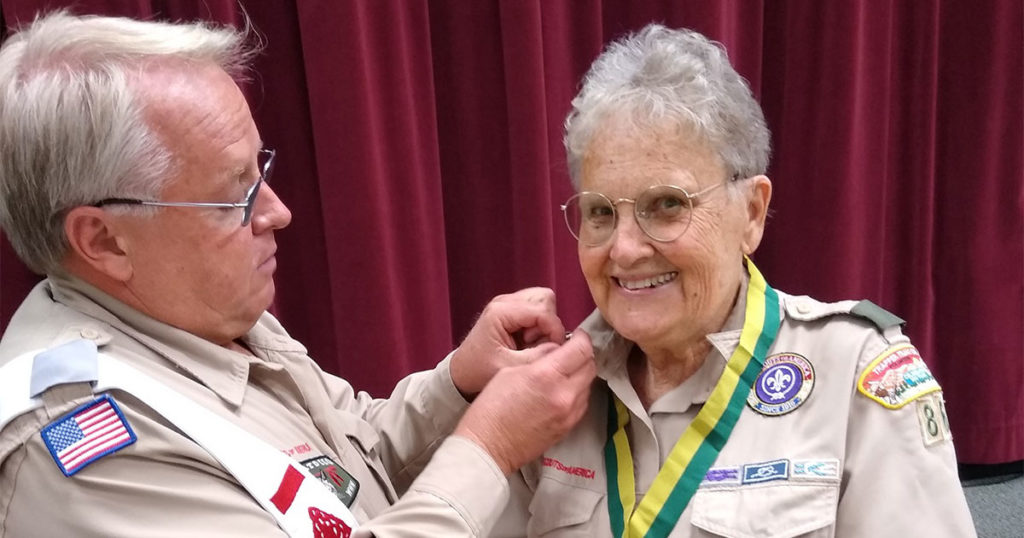 ROCK SPRINGS — Vera Trefethen recently received a 40-year service pin, the Vangaurd Award, and a plaque from the Boy Scouts of America for all of her years of service and dedication to the Scouts.

For more than 40 years, Trefethen has dedicated a lot of her time to the BSA. Trefethen said she actually should have received the 40-year pin a couple of years ago, but that didn’t change the meaning behind the pin and recognition. During a recent Court of Honor for Troop 86, BSA field executive Budd Allen presented Vera with the pin at a ceremony at the White Mountain Library.

Trefethen also received the Vanguard Award, which can be earned by Scouts and Scout leaders who belong to The Church of Jesus Christ of Latter-day Saints.

“I have been working diligently on the Vanguard Award for the past nine months and had recently turned in the paperwork for it. So those awards were not a surprise,” Trefethen said.

However, she was surprised with what came next.

Once the pinning ceremony was over, she also received a plaque from committee chair Nathan Riddle thanking her for helping 100 Scouts achieve the rank of Eagle.

“I was thrilled when my committee chair, Nathan Riddle decided to recognize me for having helped 100 Scouts earn their Eagles,” Trefethen said. “There is no award for that so Nathan instead came up with an engraved plaque. That was very thoughtful of him.”

Trefethen first became involved in Boy Scouting in 1971 when she was asked to be an assistant Scoutmaster and work with 11-year-old boys in a troop sponsored by her church. Most of her years of service have been in that position, but she has also served as troop committee chair, Scoutmaster in Wamsutter, merit-badge counselor, Cub Scout den leader, camporee chair, and Roundtable commissioner.

“My favorite part of Scouting is getting to work with children. I have eight children of my own and 16 grandchildren. I have taught the children at church since I was 16. And I was a substitute teacher 24 years,” she added. “I just love children. And I love that in Scouting I get to teach them things they would not learn anyplace else, such as flag care, knife and ax safety, and fire building.

While receiving recognition for her 40 plus years of service, she’s had no intentions of stopping anytime soon.

“I plan to continue in Scouting as long as I can. I read about a woman who was an assistant Cub Scout den leader at age 94 so I figure I still have at least 20 years left in Scouting,” Trefethen said.

She currently serves as an assistant Scoutmaster in Troop 86 and Cub Scout den leader in Pack 86.

Trefethen’s latest adventure is becoming a den leader for girls.

“I was a Girl Scout leader 24 years, but this is my first time of having a Cub Scout den of girls,” she said. “I’m excited!” 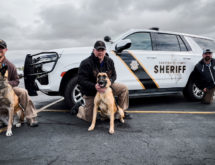 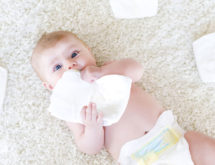 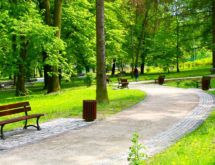