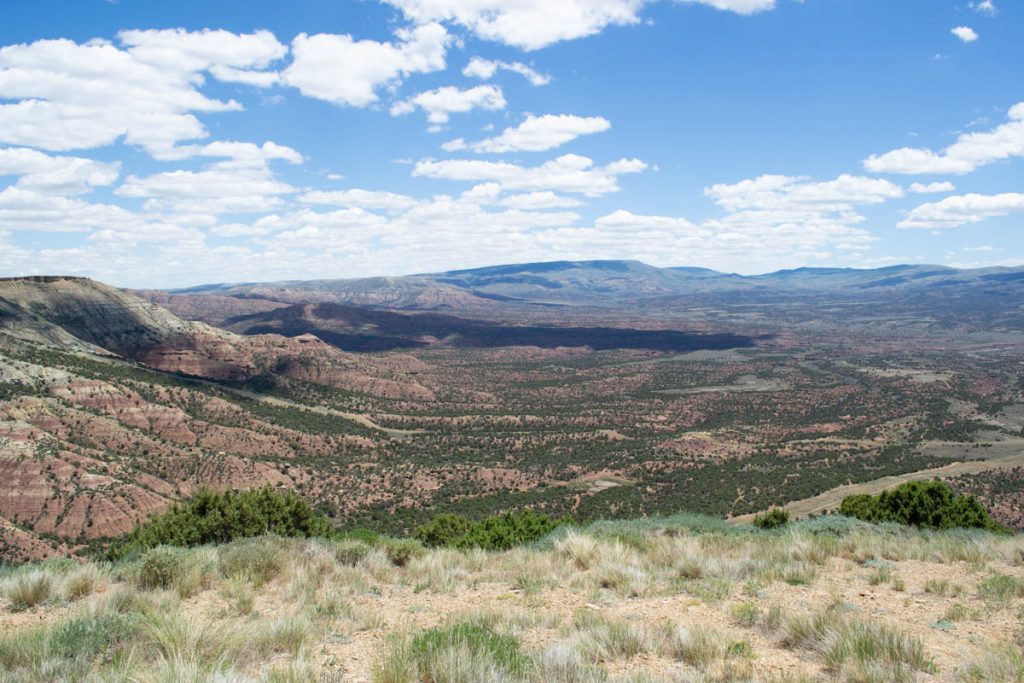 [vc_row][vc_column][vc_column_text]SWEETWATER COUNTY– Sweetwater County is home to many unique landscapes that are cherished by the local community and guests to the area and serves as habitat for several species of wildlife.

The 4th Quarter Bureau of Land Management (BLM) Oil and Gas Lease Sales are coming up in December, and includes over 700,000 acres in 399 leases within the Rock Springs BLM Field Office, with nominations still coming in.

Roughly 173,000 acres within the Greater Little Mountain Area (GLMA) alone are included in the nominations.

Groups like the Greater Little Mountain Coalition (GLMC) are fighting to get the leases within the GLMA and the Red Desert to Hoback Migration Corridor deferred until the BLM Rock Springs Resource Management Plan (RMP) is completed and the Record of Decision is approved.[/vc_column_text][/vc_column][/vc_row][vc_row][vc_column][vc_column_text]

What is the Rock Springs RMP?

Jessi Johnson, public lands coordinator with the Wyoming Wildlife Federation, explained at the July 10 Green River City Council meeting that a resource management plan is a playbook, or guide, for land management for BLM lands.

RMPs are looked at every 15 to 20 years, and the last management plan for the Rock Springs BLM Field Office was completed in 1997, known as the Green River RMP. Over seven years of research and examination has gone into the new plan, as the science, landscapes, and desired uses for the lands have changed since 1997.

The Rock Springs RMP draft is set to be released around September 2018 with a 90-day public comment period. Organizations such as the Wyoming Wildlife Federation, Wyoming Wilderness Association, and GLMC have been working to get the leases within the Rock Springs BLM Field Office deferred until the RMP is finalized.[/vc_column_text][vc_media_grid grid_id=”vc_gid:1532278149779-f13afcbd-7af0-3″ include=”205478,205479,205480″][/vc_column][/vc_row][vc_row][vc_column][vc_column_text]

In early 2018, the process for lease sales were changed, according to Shaleas Harrison, BLM Wild Lands Community Organizer with the Wyoming Wilderness Association. Changes include:

The GLMC, Wyoming Wildlife Federation, and Wyoming Wilderness Association all claim that if the lands are leased for oil and gas development before the RMP is completed at the Record of Decision is approved, they will be leased with antiquated stipulations.

“These landscapes are in trouble if these (parcels) get developed,” Harrison said.

According to the GLMC, biologists and resource managers consider the GLMA to be some of the most sensitive habitat for fish and wildlife in Wyoming. Elk, mule deer, moose, pronghorns, Colorado River Cutthroat, and sage grouse are just a few of the species that live in the area.

The Red Desert to Hoback Corridor is home to a 150-mile mule deer migration that happens twice each year. Over 4,000 mule deer make the trek. According to the GLMC, developing oil and gas right within the migration corridor could have detrimental effects on the mule deer.

The GLMC believes that these lands can be protected and conserved, “while still allowing for responsible development in the right places,” Josh Coursey, Muley Fanatic Foundation President/CEO said in an opinion piece submitted to SweetwaterNow in March 2018. People can read that opinion article here.[/vc_column_text][vc_media_grid element_width=”6″ grid_id=”vc_gid:1532278260201-24c1b946-d5ea-8″ include=”205482,205495″][/vc_column][/vc_row][vc_row][vc_column][vc_column_text]

Protecting the Gem of Sweetwater County

On June 20, the GLMC hosted an aerial tour and ground of the Greater Little Mountain Area for the public to raise awareness of the upcoming lease sales and introduce more of the community to the area. The ground tour made stops at the Red Creek Overlook and Miller Mountain.

“We are encouraging those interested to get involved in this issue,” Joy Bannon, field director for Wyoming Wildlife Federation said. “We want to enable the message that the public needs to be engaged in the process.”

“Wyoming is God’s perfect square,” Coursey said, adding that some landscapes need to be left alone.

Along with the GLMC and like organizations, the Sweetwater County Commissioners have unanimously supported the requested deferrals, as well as several Wyoming legislators.

“It is a gem and it should be preserved,” Wyoming Representative John Freeman said. “As a legislator, I support oil and gas, but Wyoming is big enough that certain gems should be protected and enhanced, and the Greater Little Mountain Area is that.”

In a letter to Governor Matt Mead, the County Commissioners said the following:

“If the GLMA and the migration corridor oil and gas leases are sold prior to completion of the RMP and its Record of Decision, the opportunities for identifying and collaborating to balance the needs of energy development, wildlife preservation, and recreation opportunities may be lost.” 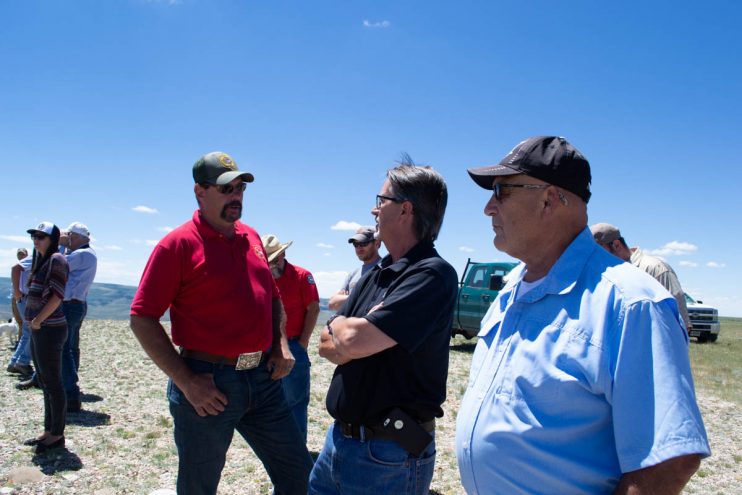 A little more than two months after receiving the letter from the County Commissioners, Governor Mead sent a letter to Ryan Zinke, Secretary of the U.S. Department of the Interior, voicing his support for the deferral of leasing the parcels in the GLMA and the migration corridor until the RMP is completed.

“I ask that you defer those parcels that lack leasing stipulations designed to protect the resources being addressed by the Rock Springs Resource Management Plan.”

The GLMA is seen as the “crowned jewel” of hunting and fishing for Wyoming sportsmen and sportswomen, according to Nick Dobric, Wyoming Field Representative for the Theodore Roosevelt Conservation Partnership.

“There is a lot of demand for hunters in this area. Lots of hunters put in, but there’s not a lot of tags offered. Oil and gas would decrease the hunting opportunity even more,” Dobric said.

With the mule deer population on a decline in the GLMA, which is being studied by the Wyoming Cooperative Fish and Wildlife Research Unit and the University of Wyoming, hunting opportunities is of grave concern for the Wyoming sporting community.

“There’s lots of emotions in this,” Dobric said. 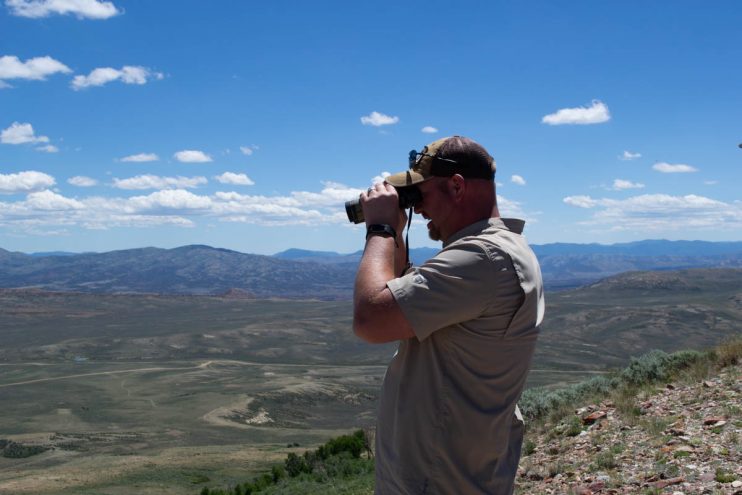 Joey Faigl, Muley Fanatic Foundation COO, has spent his entire life hunting, fishing, and recreating in the GLMA. He has spent many days out in the area, and can recall several cherished memories. However, of all of the animals he has seen out there, mule deer are his favorite.

“Nothing gets my heart going like a mule deer,” Faigl said.

For Wyoming sportsmen and sportswomen, areas like the GLMA are great places to get in touch with nature and clear their heads. They say that is hard to do next to a gas well.

According to the GLMC, the GLMA supports up to 225 jobs in Sweetwater County, and the revenue generated by hunting, fishing, and other outdoor recreation in the GLMA and the BLM Rock Springs Field Office contributes $19.1 million per year to the local economy.