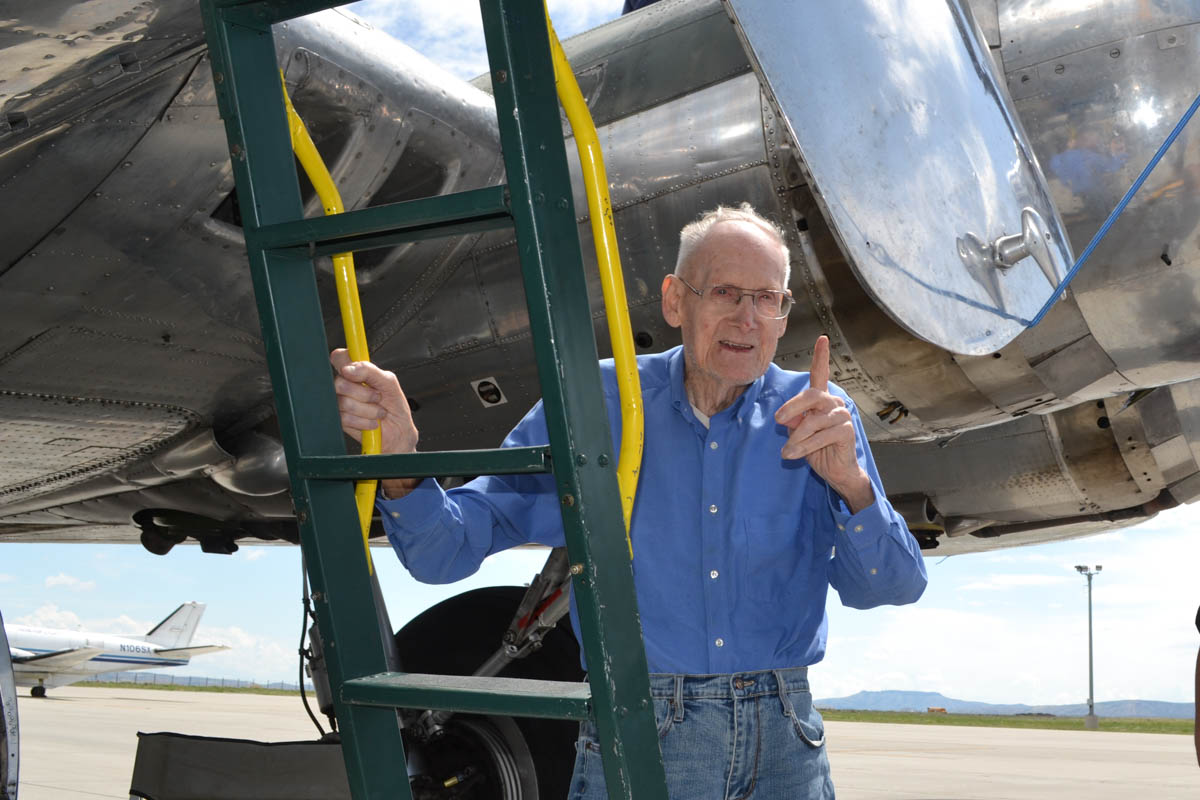 ROCK SPRINGS– As soon as Vern Petersen arrived on the tarmac at the Southwest Wyoming Regional Airport general aviation facility on Friday, June 14, he knew the war bomber plane was a B-17 straight away. He could tell because of the body style.

“I’m glad to see one like that, all in one piece,” Petersen, World War II veteran and Sergeant, said of the B-17 bomber plane. The historic B-17 was in Rock Springs last week as part of the Living Legends of Victory Tour.

“There were a couple missions where I didn’t think we’d make it,” Petersen recalled. “But we had a damn good pilot.”

Petersen and his fellow crew had to crash land one mission. He also remembers hurting his right leg once when their bomber was hit. Out of 35 missions, he was only seriously injured that one time.

Petersen and his crew flew directly over Germany, putting them right at the center of the war.

“I enjoyed it, but I was just one person,” Peterson said, acknowledging the efforts of his crew. “You have to depend on other people as much as yourself.”

As a radio man, he sat behind the pilot and co-pilot in the gunner area. His job was to relay information to the pilots. And as a gunner, “any plane that shot at us, we’d shoot back,” he said.

What does seeing a B-17 feel like after all these years? Petersen will tell you that it makes him feel reminiscent and proud.

“I haven’t see one of these in quite a while. It reminds me of the war and getting ready to take off,” he said.

He explained that the airplanes would all be lined up as they prepared to take off and do flyovers.

“When you see a B-17, you pat yourself on the back,” Petersen said. “Because I got back home.”

Upon arriving back to the United States, Petersen became a math teacher and taught in Rock Springs for several years.

During his visit to see the plane, he was able to sign the bomb bay, with his name, dates of service, and how many missions he served with the B-17.

“It took a while, but we won that war. And that feels good,” Petersen said proudly.

At just 17-years-old, Dallas Galley volunteered for the Army Airborne to become a paratrooper in the Vietnam War.

“Joining the Army was something I thought I had to do. My uncle was in World War I as a paratrooper, so that’s why I wanted to be one too,” Galley said.

Galley was part of the 82nd Airborne Division, and he recalls jumping out of the planes with lines of 100 to 200 other paratroopers. Their job was to jump into enemy lines, search and destroy, and then find their way back to their own lines.

“They’d load about 70 of us into a plane, and we’d run as fast as we could out those doors and come down to the ground all at once,” he explained.

Though Galley didn’t operate on bomber planes such as the B-17, and he didn’t serve in WWII, it still brought back memories of when he served in the Vietnam War.

Galley served in the Vietnam War for four years until he broke his back. His injury resulted in him having to stay at Walter Reed National Military Medical Center for two years as he recovered.

“They said I’d never walk again,” Galley recalled, to which he said, “Yes I will.”

Galley’s mom didn’t want him to volunteer for the Army, but he told her he was going to serve his country and he’d never have to worry about being poor. When he recovered from his back injury, he moved to Grand Junction, Colorado, and started a construction company for the oilfield. He later moved to Wyoming.

“I had a good job, it all worked out really good for me,” he said with a smile. And he never had to worry about financial security, just like he promised his mom.