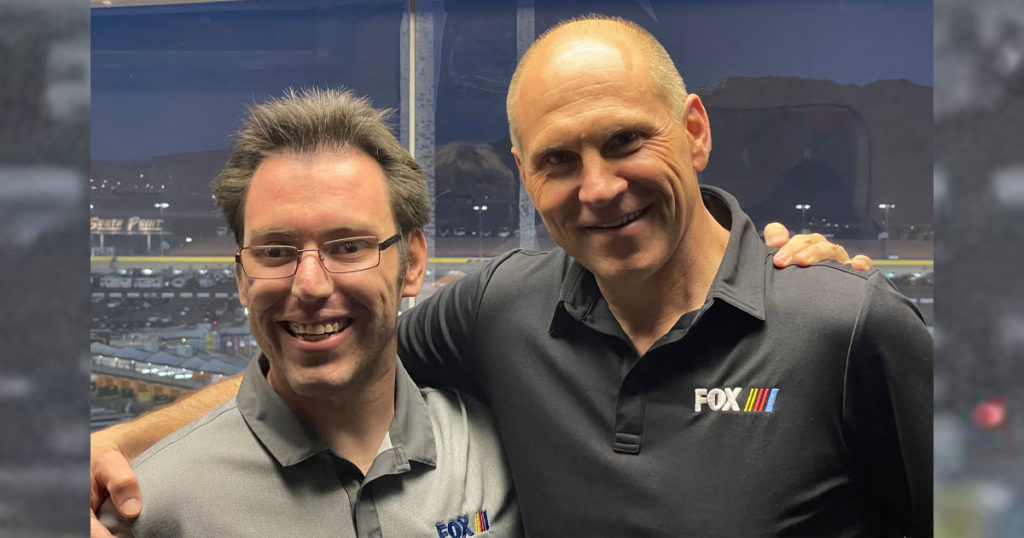 Andrew Gallinger enjoyed the experience of a lifetime broadcasting a live Xfinity Series truck race at the Las Vegas Motor Speedway with his mentor and friend Adam Alexander of FOX Sports.

Ever since he was 8 years old, Andrew Gallinger has dreamed about being a broadcaster.

It started when he accompanied his mom to work and listened to her as she recorded radio advertisements for a local station.

Andrew had always been an avid sports fan as well, and about that time he realized that “this talking on the radio thing may be kind of fun.”

He refused to allow the challenge of being born with cerebral palsy get in the way of chasing his passion. As he grew into his teenage years his love of broadcasting and sports grew with him, so he decided then that he would pursue a college degree in the field.

Andrew graduated from Rock Springs High School in 2011 and then spent two years at Central Wyoming College in Riverton where he earned an Associates Degree in Radio Broadcasting. He worked for about a year as a sports reporter for The Rocket-Miner newspaper then enrolled at the University of Utah in the fall of 2014. Andrew graduated with a Bachelor’s Degree in Communications with an emphasis in Broadcasting in 2016.

In his final semester at the U of U, Andrew gained some valuable experience interning in the news department at CBS affiliate KUTV in Salt Lake City.

“I only covered hard news and nothing sports related during those four months,” Andrew said. “But those skills & connections are still paramount in my life today as I pursue my ultimate dream: a job in sports television as a broadcaster one day.”

Andrew officially began his career behind the microphone broadcasting Western Wyoming Community College basketball games on Mustang Radio 91.3 FM back in 2018. From there he created his own Youtube Channel, and with the blessing of Sweetwater County School District No. 1, Andrew started broadcasting Rock Springs Tigers home football games in 2021.

The Roman poet Virgil once wrote “fortune favors the bold,” and a little tech savvy doesn’t hurt either. Andrew took his RSHS football broadcasts and shared them on Twitter, and that’s when the opportunity of a lifetime emerged.

Andrew has always been a huge NASCAR fan and follows Xfinity Series race announcer Adam Alexander on Twitter. The two struck up a friendship after Andrew reached out to Alexander who then listened to some of his football broadcasts.

“Over time we got to know each other through direct messages…then we talked on the phone and did Zoom calls periodically and that’s when our relationship started to grow,” Adam said.

The two began connecting more often last fall before Tiger football games where Andrew would share storylines about that night’s game, and Adam would offer broadcasting fundamentals to help Andrew reset before he called the game.

Andrew shared with Adam that he had been to a number of NASCAR races at which point Adam invited him to be his guest at the upcoming races in Las Vegas. Not just as a spectator but as a guest commentator.

There happened to be an NASCAR Truck Series race that weekend, and the idea developed that Andrew would do play-by-play for the race while Adam provided color commentary.

“We’ve got a tremendous group of folks at FOX that accommodated us that weekend with a secondary booth that was set up for us to call the race, so all the stars aligned and it worked out perfect,” Adam said. “I was happy for Andrew, I was proud of Andrew, and it was just cool to be part of that experience.”

The entire experience for Andrew will be one he never forgets either.

“Seeing it first-hand and being accepted by all at Fox Sports that I met is truly humbling,” he said. “To learn as a broadcaster from them all weekend was great, but to know I, Andrew Gallinger, from little Rock Springs, WY with talent, career goals & lifelong challenges left an imprint on Fox Sports personnel at Las Vegas Motor Speedway, this was about more than me. We were all meant to cross paths.”

Andrew said he will forever be grateful for the moment he decided to reach out to Adam for professional advice. He wasn’t expecting anything more in the moment, but through perseverance he now has a friend in his corner that he can lean on both as a friend and mentor.

Andrew Gallinger has never used his cerebral palsy as an excuse in his pursuit of happiness and his goals. Which makes this particular episode in his life so rewarding and inspirational.

He plans to continue his broadcasting career and hopes to one day take his talents back to the national stage.

They always say in this business that you don’t want to be the story, but I think given my unique situation I have this special platform to say ‘things can happen if you believe in yourself’. 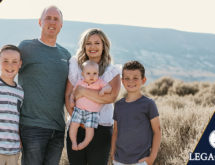