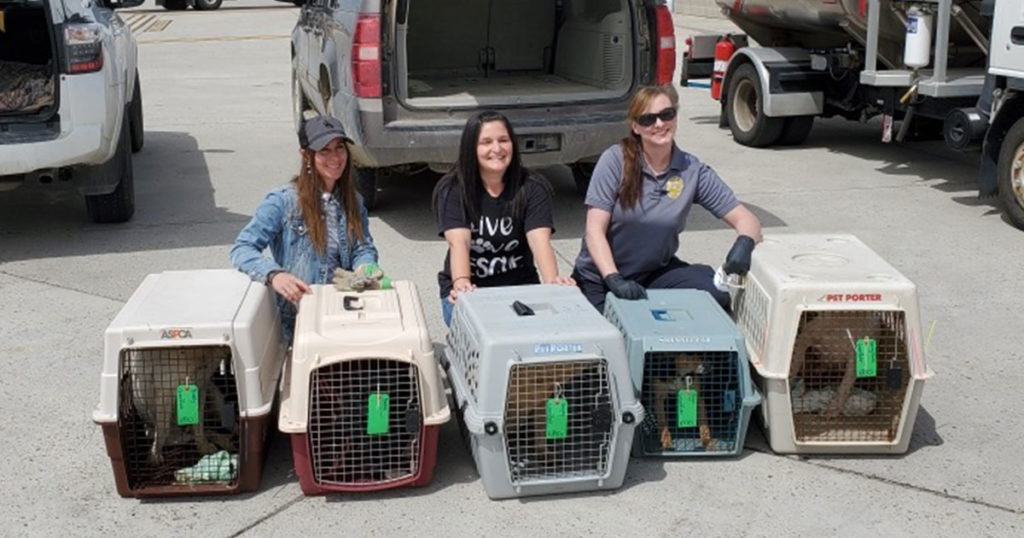 Heidi Hernandez (middle), Red Desert Humane Society Manager, and Lydia Holmes (right), Green River Animal Control Officer, pick up the animals they took in from Dog Is My Co-Pilot in May. Courtesy photo

GREEN RIVER — Over the past 10 years, the Green River Animal Control (GRAC) has made it their mission to improve their ability to rescue animals; and by doing so they’ve created a rescue network where they can work with other agencies to ensure animals find good forever homes.

Lydia Holmes, Animal Control Officer (ACO), started with the GRAC about eight years ago and has worked tirelessly to make connections with rescue organizations across the state, as well as other states, to help rescue as many animals as possible.

“Where we started 10 years ago to now at Animal Control, rescue, transfer, and relocation has taken off,” GRAC Supervisor Tracy Wyant said. “That’s 100 percent because of Lydia. Every shelter needs a Lydia.”

Working multiple jobs, much of the rescue work Holmes does is done in her own personal time. Holmes said she does the rescue work primarily out of work hours because, “I’m passionate.”

Whereas many shelters across the nation have experienced an influx of animals during the COVID-19 Coronavirus pandemic, the GRAC and Red Desert Humane Society both experienced the opposite. This allowed Holmes the ability to connect with Dog Is My CoPilot, a rescue organization that flies animals across the nation to place them in shelters that will give them the best chance for adoption.

GRAC made their first pull of animals from Dog Is My CoPilot on May 2 and then did another pull on May 28. The last pull had 13 dogs and two cats, of which GRAC took in three dogs and Red Desert Humane Society took the rest. Ninety-one animals total were on the flight, being transferred from Texas and New Mexico to Wyoming, Idaho, Utah, Montana, and Colorado.

“Sometimes all the animal needs is a change in location,” Holmes said.

Rescuing Animals is a Community Effort

Though Holmes has taken it upon herself to build a network for rescues and make connections with other organizations, she said it is far from a “one person show”.

She said the entire GRAC department is on board for the rescues and works to help make it happen. Wyant gives the staff the go ahead to go out and pick up animals to bring back to the shelter and trusts them to pick animals that will have success in finding a forever home.

Holmes has also been joined by Taylor Frint, Green River Police Department Nuisance/Work Restitution-Community Services Officer, and Aubri Schneider, GRAC summer hire, on rescue trips. For the time being, Holmes and Frint have to use their own personal vehicles to go pick up animals bring them back to GRAC.

Holmes and Wyant both said the entire Green River Police Department supports the rescue efforts, and that’s what allows them to extend their help.

“I couldn’t rescue without an organization that supports it,” Holmes said. “Everyone wants the best for the animals. We’re all on board.”

Other animal lovers in the community also help out with the rescues, such as Paw Spa, who grooms the animals free of charge when the animals arrive in Green River.

“We don’t have the supply for the demand. That speaks to the citizens,” she said.

Through the community’s responsible care for animals, they allow GRAC to take in animals from other rescues. This is also important because, as Holmes noted, in times where GRAC may have an influx, they can reach out to other rescues to take some animals in.

“We’re able to return the favor. They help us when we need it, and we get to do the same,” Holmes said.

Holmes added that since Heidi Hernandez took over as manager at Red Desert Humane Society, the relationship between Red Desert and GRAC has improved immensely, and they can now transfer animals between the two of them to give the animals the best chance of adoption.

Though GRAC does have the law enforcement and control aspect of the job, Holmes and Wyant said the goals of GRAC and Red Desert is the same.

“We do it because we care. It’s the bigger picture, we’re animal advocates,” Wyant said.

Hernandez said she has great relationships with both GRAC and Rock Springs Animal Control, and this allows Red Desert to help both agencies with taking in animals when overcrowding is occurring. Hernandez and Holmes keep in touch on a weekly, sometimes daily, basis.

“Lydia has a lot of contacts, so when RSAC and GRAC are doing well and don’t need my help, I contact Lydia to see if she knows of other shelters who might need help,” Hernandez said.

Hernandez took in five dogs from the first pull from Dog Is My Co-Pilot, and 10 dogs and two cats from the pull last week.

Red Desert expected adoption rates to go down during the COVID-19 pandemic, but fortunately that hasn’t been the case, according to Hernandez.

“I’m very thankful for that,” she said.

The Red Desert Humane Society’s capacity has been pretty normal amid the pandemic, Hernandez said.

“We are getting dogs adopted pretty quickly and that’s been great,” Hernandez said. “We then pull more in from other shelters and we take owner surrenders. It unfortunately is a revolving door.”

Though Hernandez wishes animals already had wonderful homes, she is thankful that they have the ability to take animals in and adopt them out.

“I love that we have the room to help and have a wonderful staff that takes care for them while they are here like they are our own,” Hernandez said.

Rewards of the Work

Both Holmes and Hernandez agree that the most rewarding part of their work is pairing animals with a family and see everyone’s excitement when the animals are adopted.

“Adoption days are the best and very exciting,” Hernandez said. “We care for these animals every, single day and treat them like they are our own, so we do get a little choked up when they leave. It’s always happy tears though.”

Hernandez said it’s a great feeling to see a dog or cat happy with their new family, and they love getting updates from the adopters.

“It makes us so happy to see how the animal has grown, adjusted, fits into the family, and all the adventures they have been on,” she said.

Holmes said the goal is to always find a loving forever home for the animals. When she sees dogs they’ve adopted out to the community out on walks with their families, she said it makes all of the hard work worth it.

“That’s all the reward we need,” Holmes said.