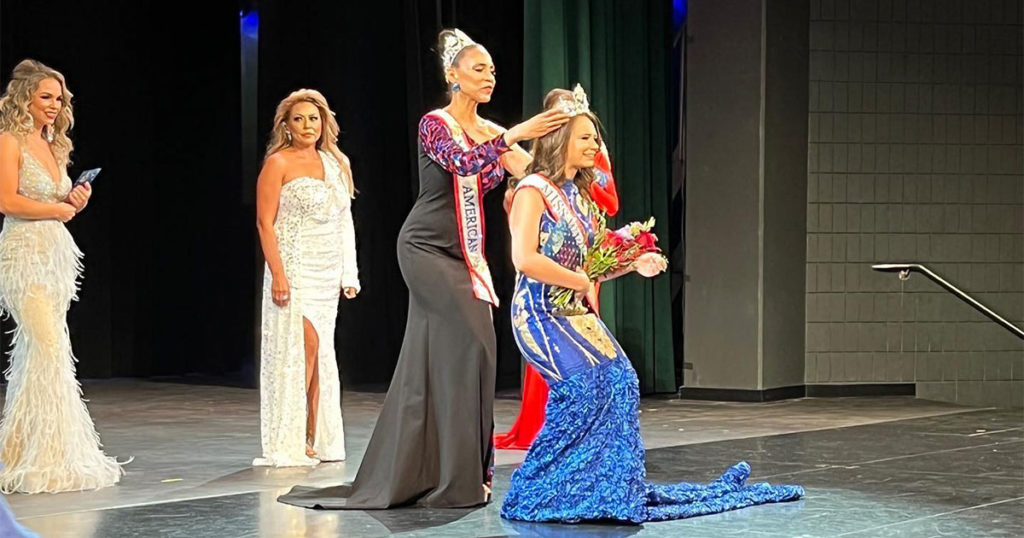 The moment Sierra Sorensen had been waiting for arrived when she was crowned Miss Wyoming for America Strong 2022. Wyoming American Pageants Facebook photo

Sorensen, who is a 2021 Black Butte High School graduate and current Western Wyoming Community College student, was officially crowned on June 25 in Casper. During the pageant, Sorensen quickly found out she was the only one competing in her division. However, this didn’t stop her for working hard with the pageant participants for the two other competitions: the Mrs. Wyoming America 2022 and Mrs. Wyoming AmeriCAN 2022.

While Sorensen was a little disappointed when she discovered she was the only one competing for the title, she didn’t let that get to her and focused on doing well in the competition and making new friends with the other pageant participants.

“I figured a lot more girls would be a part of this,” Sorensen said. “The greatest thing I can live by was it was my time. It was my year.”

Sorsensen said she prepared for her interview the most because it’s where most of the points are earned in this pageant. She also prepared for her on-stage appearances including swimsuit, evening gown, a dance routine with all of the contestants, and answering an impromptu question.

For Sorensen, competing in pageants is something she’s done since she was young. It all started when she basically tricked her mother into signing a paper allowing her to participate in a pageant in Casper. At that time, her mother was working long shifts in the oilfield. Sorensen and her grandmother talked about how nice it would be for Sorensen to compete in a pageant. Sorensen said she just asked her mom to sign a permission slip, which her mom believed to be a school permission slip. Because her mom was so tired, she just signed the paper without reading it.

Much to her mother’s surprise a few weeks later, Sorensen and her grandmother said they were ready to travel to Casper so she could compete in a pageant. That’s how it all began. From there, Sorensen’s passion for competing continued to grow. Over the years, Sorensen has competed in too many pageants to name. From little miss to rodeo queen pageants, she’s done them all.

“I’ve been doing pageants since I was five or six,” Sorensen said.

This is why Sorensen isn’t concerned about going into a national competition without competing against anyone for her Wyoming title. Sorensen said she just does her best and competes just as hard as if there were a lot of other girls competing.

Sorensen has held many titles over the years and was proud to say she even made it to a national competition when she was around 11 years old. After being on the national stage, Sorensen has had the goal in her mind to get back to nationals.

With hard work and dedication, she’s been able to make that dream a reality. In 2021, she was crowned Miss Sweetwater County and with her most recent crowning, she is once again headed to the national stage.

From August 12-21, Sorensen will be attending the national competition in Las Vegas. She is expecting one girl from every state to be in attendance. Once again, Sorensen is focused on nailing the interview portion of the competition since it is worth the most points. She’s also trying to figure just how many evening gowns and other outfits she will need for the long competition.

She said she’s expecting to practice at least 3 hours a day trying to learn all of the choreography for the televised pageant. She said she doesn’t want to mess up on the national stage. However, she’s not going to let it stress her out either.

“I’m just going to go do my best and enjoy Vegas and the experience,” Sorensen said.

What Sorensen is looking forward to the most is meeting the other pageant participants. She said she can’t wait to meet other people who have the same interest that she does.

As for her platform, Sorensen is trying to ensure all girls and women know they are beautiful the way they are.

“My platform is ‘you are beautiful just the way you are’,” Sorensen said. “You are perfect in your own body and I was to help people embrace that.”

While Sorensen is looking forward to the national competition, it may be her last. For now, that is. After this competition, she would like to focus on continuing her college education and starting a career.

“I think after this I might be done,” Sorensen said. “Until I get married of course, and then I might be back.”

Sorensen said she’s available to attend events and those who would like her to can contact her on her Facebook page Sierra Christie Sorensen. For more information about the Wyoming American Pageants, visit their Facebook page.

Editor’s note: This article has been updated to reflect that Sorensen wasn’t the first Sweetwater County resident to hold this title. We apologize for any inconvenience this may have caused.