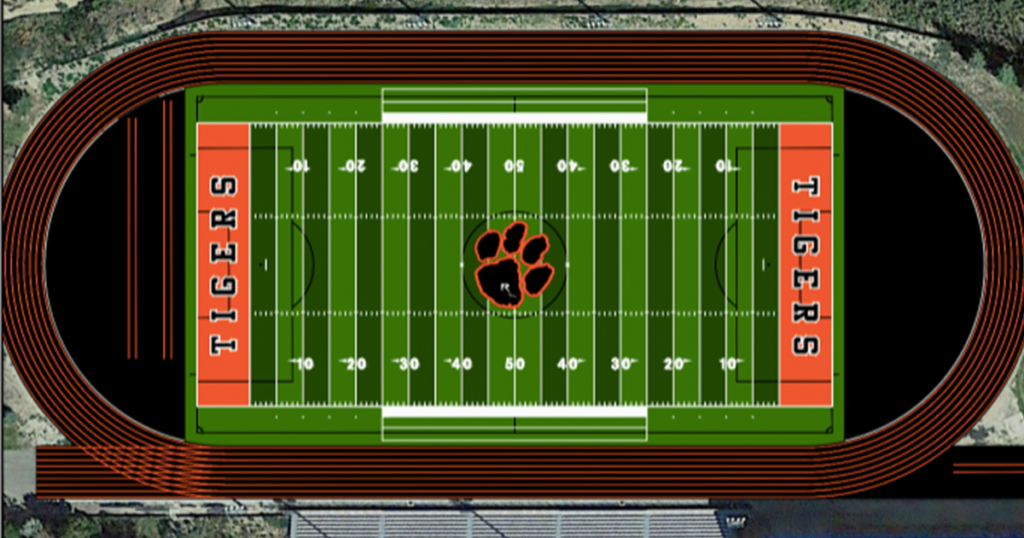 This is the new design for the football field and track surface at Rock Springs High School. Photo courtesy of Tom Jassman.

If you’ve passed by Rock Springs High School (RSHS) this week, you’ve more than likely noticed the construction crews hard at work on Tiger Stadium’s football field and track surface. What you didn’t see is that there are crews also working inside, preparing to replace the floor of Tiger Arena.

With school out of session, RSHS is taking full advantage of the summer months to redo the football field, track and basketball court. In addition, the throwing pits and auxiliary gym are also receiving a makeover.

In 2010, RSHS put in the first turf field. On average, a turf field is typically good for 10-12 years. Based on the condition of RSHS’ field, it was right at the 10 year mark and in need of replacement.

“It takes a lot of beating with the weather and the wind,” RSHS Activities Director Tom Jassman said. “… and you know, it gets used quite a bit, so it was time to make a change.”

Crews began work on the football field on May 12 and just recently finished stripping the old field. Those hoping to get a piece of RSHS history won’t be able to according to Jassman. Once construction begins, the field becomes the property of the company doing the work. Due to what Jassman said is a liability issue, the company will recycle the old turf.

The football field will now feature different shades of green every five yards, a look Jassman has always favored. He also wanted to change the color of the endzones to orange instead of black, keeping the same “TIGERS” wording.

Rock Springs and Green River are teaming up to host the 4A/3A state soccer tournament in either the 2022-2023 or 2023-2024 season. As part of the requirements for hosting a state event, a camera for online broadcasts must be available. With the new field will come a new camera attached to the press box to fulfill that requirement. State soccer will be held at both the high school and Rock Springs Junior High. Jassman said the junior high will also be getting a new camera this summer.

“We’re just looking into that, nothing official yet,” Jassman said.

The track at RSHS was a different style when it was put in 10 years ago. The track had a more breathable design, allowing moisture to seep through. Although it was resurfaced a few years ago, the last few winters have shown little forgiveness, leaving the track in rough shape. The new track will still be somewhat permeable, but most of the moisture will now run off of the track, preserving it better than the previous design.

After entertaining the idea of adding orange stripes for each lane on the track, Jassman asked for a mock-up design. Seeing the mock-up was all he needed to go through with the new look which will now add a touch of color for track athletes.

The long jump and triple jump placement will be moved to the east end, where the shot put pits are at. The relocation will help with relieving congestion for the 100 meter and hurdle events and provide an advantage to participants.

“We typically get an east or west wind. That will now be complimentary towards their running based on the weather,” Jassman said.

The shot put pits will also be adjusted so that throwers are aiming east instead of south.

Discus throwers will also see a bit of a change. Jassman said the school is putting five throwing pads towards the south end of the practice field. A cage for each one has been built, an ideal safety feature which will also help with practice efficiency.

Tiger Arena Gets a Modern Look

Similar to the football field, Jassman designed a modern look for a new basketball court. The new design will similarly feature the school’s official paw logo at center court. Inside the three-point line there is a faded out tiger stripe theme. The outside boundaries will remain similar to the current court with black and orange tiger stripes. Along the home bench will be the words “Rock Springs” and “Tigers” in front of the away bench.

The new court design will also have a college three-point line in case Western Wyoming Community College needs to use the school’s court.

Jassman said that he is optimistic that there will be a fall sports season. Right now, there are plans being made for a delayed season should there be a need to adjust the schedule.

With that in mind, crews are expected to finish the basketball court the first part of July. As for the football field and track, the work should be completed by mid-to-late August.

“We have actually prepared to schedule games over at the junior high if needed,” Jassman said. “Ideally I’d like them to be playing their first game at home.”

For now, the work will continue as the new-look facilities receive a makeover.