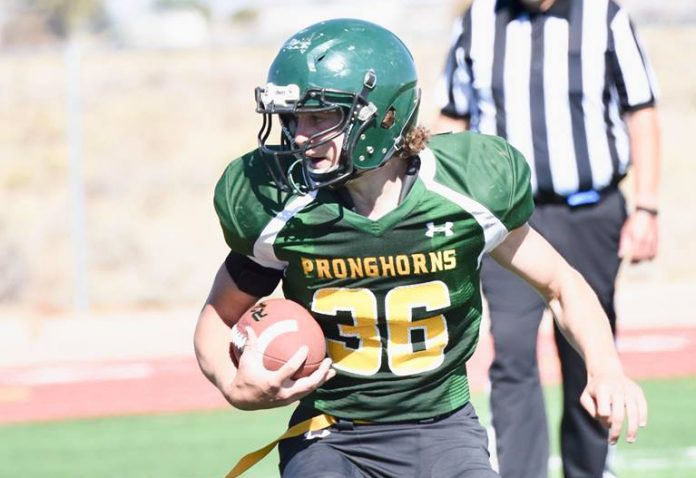 Farson improved to 6-0 against the fourth ranked Rattlers who only found the endzone twice against the Pronghorns defense.

The Pronghorns wasted no time against the Rattlers as the first play from scrimmage called upon Lain Mitchelson for a 31-yard run. Farson struck first on the next play, resulting in a three yard touchdown run by Clancy Gines to give the Pronghorns an 8-0 lead.

Looking to even the score, the Rattlers recovered the kickoff on Farson’s own 38 yard line. However, the Pronghorns’ defense continued it’s habit of stopping teams on fourth down. The Rattlers drive ended on a failed fourth down conversion.

On the next possession for the Rattlers, a similar result haunted the offense. After several big plays by Zander Risner, the Rattlers threatened to tie the score. The Pronghorns’ defense once again denied the Rattlers on fourth and one, resulting in a turnover on downs.

Mitchelson continued to have his way against the Rattlers defense throughout the game. The Senior found the second score of the day on a 60-yard touchdown run to extend Farson’s lead 14-0.

Little Snake River answered Mitchelson’s score with a touchdown on the following possession. The Rattlers strung together a score right before the end of the quarter on a touchdown pass to Karter Evans on the one-yard line. The Rattlers now found themselves with a manageable deficit of 14-7.

The second quarter followed a similar pattern for both teams. Six seconds into the quarter, Mitchelson connected with Gines for a 33-yard touchdown pass.

With less than two minutes left in the half, the Rattlers proved again to be able to score in tough situations. Little Snake River marched down the field and scored on another one-yard play. Riggen Myers pounded his way into the endzone with 13 seconds left in the half.

Farson’s 36-13 lead at halftime was enough to carry the team through the second half. The Pronghorns scored an additional 28 points and only gave up six points defensively, giving the Pronghorns the victory 64-19.

Farson has back-to-back wins against ranked opponents in the top four. The Pronghorns have been the hottest team in six-man football and look to continue to do so next week against current fifth ranked Burlington. The game is scheduled to begin at 7 p.m.