ROCK SPRINGS – As the wind gets cooler and, instead of green leaves, red, yellow and orange ones hang from the trees while others crunch under your feet, it means only one thing, fall is in full force. While most don’t look forward to the white stuff which will soon follow, there is one day that many people love to celebrate: Halloween.

For many years now, the historic downtown district of Rock Springs comes alive during this time of year. People wait for the great pumpkin to rise from the pumpkin patch while others prepare to let loose and become their alter egos. This year, even more activities have been added with movies at the Broadway Theater throughout the month of October.

It all builds up to the community favorite, the Halloween Stroll. Recently, several city entities have begun preparations for the annual event. This year’s event will  take place on Saturday, Oct. 25 and will run from 11 a.m. to 2 p.m. The stroll historical starts at the Rock Springs Historical Museum.

The museum has transformed during October into a spooky walk through history, especially in the old jail as it is always a surprise what visitors will see. The board recently approved spending money for goodies for the stroll but are asking local businesses to help provide bags for the young trick-or-treaters.

Museum Coordinator Bob Nelson said they are asking any business that would like to donate bags to contact the museum. He said recently He and Rock Springs Mayor Carl Demshar sat down and discussed last year’s stroll. They figured  there were between 5,000 and 6,000 residents and visitors at the event.

Also getting ready for the stroll is the Rock Springs Main Street/Urban Renewal Agency which, along with the museum, has spearheaded the growth of the stroll and the pumpkin patch. While participating in every stroll since the beginning, for URA Director Chad Banks, this is the first stroll he has been responsible for.

Banks said the committee has met a couple of times and are working on details. He said they are getting ready to start contacting business to see who will be participating in this year’s stroll. The stroll usually involves businesses on Broadway, South Main, North Front, K St., Pilot Butte and throughout the entire downtown area. Banks said they are also hoping it will go up towards the Rock Springs Library, the bowling alley and the Community Fine Arts Center.

Events get underway in the downtown on Oct. 12 as the Broadway Theater is selling tickets as the season premiere of “The Walking Dead” which will be showing on the big screen. Banks said they are encouraging people to wear their “best zombie attire.”

On the following day, the pumpkin patch will open to the public. The patch runs from Oct. 13 and wraps up on the day of the Halloween Stroll. Banks said there will be several games and activities at the patch on that day. While going into the patch is free, residents can purchase pumpkins with the money going to grants and programs which help bring the downtown back to life. The patch is open daily from noon to 6 p.m. except on Sunday.

The fun continues on Oct. 18 at 2 p.m. as the Broadway Theater will have Casper on the big screen. Tickets are also currently on sale for this event as well.

While Banks said many details about the stroll will start coming out in the upcoming weeks, he did slip a little about several haunted houses which will be along the stroll route this year. He said the American Legion is partnering with Big Brothers Big Sisters for one while the Elk’s is also looking at the possibility of having one during the stroll. Banks said the Elk’s is still tentative.

Another one will be at Once Upon A Party down on Pilot Butte. Banks said this one will not be as scary as some haunted houses are but will be creepy fun for the entire family.

“They will not all be super scary,” Banks said. “There will be some kid friendly ones along the way.” 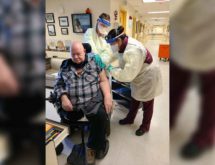 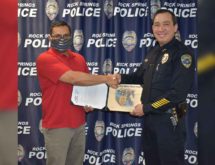 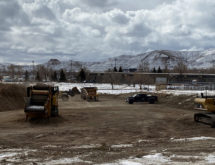