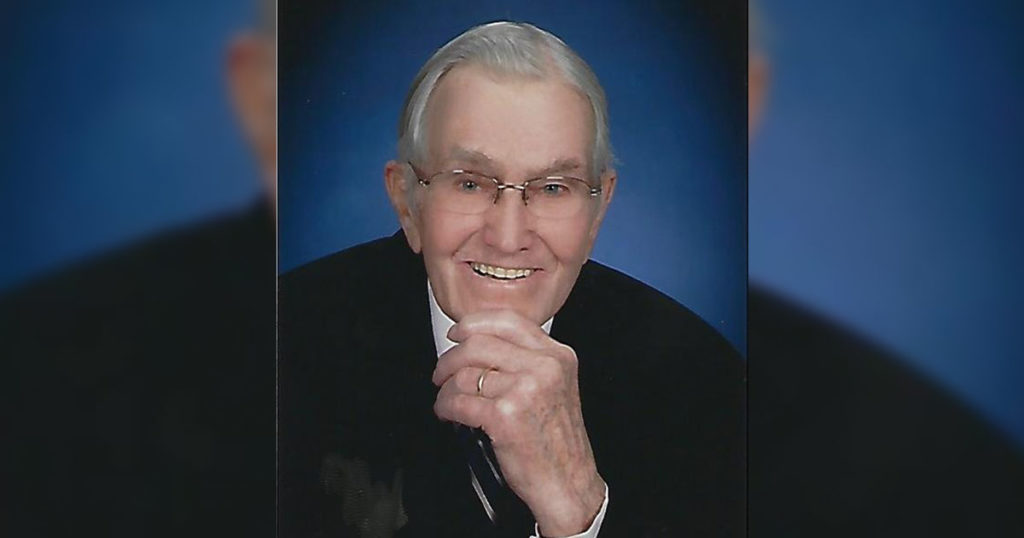 Roy B. Reed passed away on July 2, 2020, at the Southbrook Skilled Nursing Facility in the 98th year of his life.

He was born October 21, 1922, in Lesterville, Missouri, the oldest child of Claude and Nora (Howard) Reed.

He spent his growing-up years on a farm and learned to do everything that was required to make a living. He learned to cut hair with a set of clippers, a comb, and a pair of scissors that he had earned by selling seeds door to door. Growing up during the depression, he learned how to make the most of everything. His motto then, and throughout his life, was “use it up, wear it out, make it do, or throw it out”, a motto which served him well throughout his life (although he did have trouble with the throw it out bit – always thought he’d be able to find a use for everything). He and his sister and brother spent many happy hours roaming in the woods near their various farms. When he grew up, Roy worked in his father’s lumber mills.

During down time, he and his best friend from high school, Leo Asher, would ride their bikes all over the area near Chloride. One of their favorite escapades was to peddle to the top of the long hill going to Lesterville. They would then coast down the hill, often times with no hands on the handlebars. They did not use the brakes, and so could reach very high speeds. And it was a gravel road.

When he graduated from high school, Word War II was in full swing, so he and Leo joined the Army together. His first tour of duty was riding the Union Pacific trains from Denver, Colorado to Green River, Wyoming and back to Denver as an MP. During a turn around stopover in Green River, he met and fell in love with a beautiful nurse, Lois Hunter, a native of Rock Springs, WY. They were married on July 1, 1944, in St. Louis, MO. Roy was then transferred to the Army Engineer Corps and was shipped overseas. He spent a lot of time building pontoon bridges over rivers where the retreating German Army had destroyed the bridges. After VE day, he was shipped out of Marseille, France, though the Panama Canal, to Japan and the fighting there, but VJ day happened before he could get there, so for a short time, he was part of the Occupation Forces.

After being discharged, he attended the University of Wyoming for 1 year, returned to Rock Springs, and entered the builder’s apprentice program, where he became a carpenter. He worked for various construction firms in the area until the family moved to St. Louis for 5 years, where he worked for a firm specializing in upscale construction. There he acquired the skills he would later improve upon to become a finish carpenter.Roy enjoyed hunting and fly fishing, but more than anything, he loved his family, teaching his grandchildren—as he had his children—to be self-reliant, generous, caring, loyal, true, and loving.

After he retired from carpentry, he made a second career at Ace Hardware, where he rose to the position of a manager.

His wife, Lois, preceded him in death in 2002. On a “final” trip to Missouri a couple of years later, he stopped in to visit Leona Asher, the wife of his best friend, Leo Asher. Leo had passed a few years earlier. One thing lead to another, and soon Roy packed up and moved to Missouri and married Leona.

He is survived by his second wife, Leona, two sons, Bruce and wife Margaret (Manner) of Rock Springs and Roger and wife Linda (Whiteman) of Riverton, WY; three grandchildren and nine great-grandchildren.  He will be missed for his wisdom, guidance, and knowledge.

Military honors and entombment will take place at 10 am, Saturday, August 1, 2020, at the Rock Springs Municipal Cemetery. A viewing will be held from 6-8 pm, Friday July 31, 2020, at Fox Funeral Home.

The family requests donations in Roy’s name be made to a charity of their choice.

Condolences may also be left at www.foxfh.com.