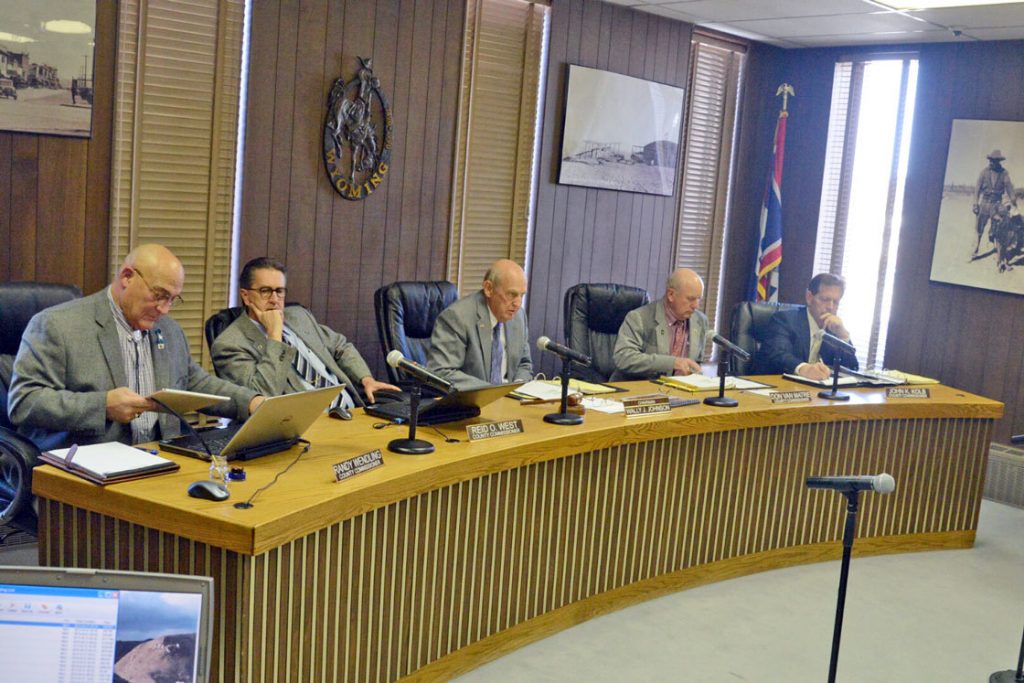 SWEETWATER COUNTY – For several months there has been a lot of focus and debate on the proposed ambulatory surgery center on the campus of Memorial Hospital of Sweetwater County. After a public hearing on Tuesday, the Sweetwater County Commissioners unanimously voted against using bonds to finance the expansion.

Before opening it up for public comment, Chairman Wally Johnson asked for only the public to speak and not those involved in the project. He said they have heard from all the major players in past meetings and wanted to focus on the public’s thoughts and concerns. He also made sure those in attendance knew the commission only wanted to hear comments about the issue of bonds being used to finance the proposed center and not other issues.

Johnson said all of the county commissioners have heard from many residents as well as people in neighboring counties who were trying to get more information and also had thoughts about the proposal. He said they have all received comments for the project and others against the bond issue.

Several doctors in the area spoke in favor of the proposal. While Johnson said he wanted to hear from the public and not people involved in the project, he clarified that his comments were directed more at the administration because they had heard from the those at the top previously.

Dr. Jeff Johnson, an orthopedic surgeon, was first to speak. Dr. Johnson has been in the community the majority of his life but recently returned to practice in Sweetwater County. He said the surgery center makes sense because they are more affordable for patients, have lower overhead costs and have a more focused approach. He added they are more efficient and in the end those cost benefits are passed along to the patients.

Another benefit Dr. Johnson pointed out was it helps in recruiting physicians to the area. He said when surgeons are deciding on a community, they often look to see if there is access to a center such as this. He said it also helps retain nurses and technicians as well. Several of the younger and newer doctors to the area said they choose MHSC Because of the expansion, medical office building and talks of this new center being built.

Another local surgeon, Dr. Sigsbee Duck, also spoke in favor of the center. Duck spent a great deal of time speaking about the privately owned medical center currently being built on College and Stagecoach. With the current rules in Wyoming, Duck pointed out anyone can build  a hospital in Wyoming. He explained to the commission decisions like building a surgery center need to be considerably looked at for the survival of the hospital. He said what people often forget is these private hospitals will only accept those with insurance and will not accept Medicaid, Medicare and Title 19. He also echoed many of Dr. Johnson’s statements.

Community resident Mike Masterson also gave his input to the commission. He said one of the biggest questions he had was if it is built can MHSC compete. He said he has looked at patient costs here and noted they are higher in many aspects than in other places.

Masterson said many people in the community rely on the experts and their opinions on decisions like this. He said he is in favor because so many doctors and others in the field have said this is the right thing to do for the community.

Dr. Joe Oliver addressed the commission but from another viewpoint. Oliver took the commissioners back to 1977 and the $30 million move to where the hospital sits now. He said while they could have continued to operate and many residents enjoyed having the hospital where it was by the cemetery, the move was necessary because of the changing landscape of healthcare. He said the surgery center mirrors the past because it is the direction healthcare is moving.

Dr. Jeff Wheeler and Dr. Samer Kattan both spoke in favor of the project, echoing most of the comments made by the others.

Lynn Van Over also spoke in favor of the project. She said the community has heard shop Sweetwater County for years but watches as it keeps losing business here because services like the surgery center are not available in Sweetwater County.

“It keeps people and services here,” she said.

Despite all the uproar, only one person spoke against the project. He first spoke about poor service but was reminded the issue on the table was for the bonds and the surgery center. Chairman Johnson said  the MHSC board has two opportunities at their monthly meeting for people to speak the board about issues such as poor service. After this, the gentleman said he was against it because it was too expensive.

After closing the public comment period, the commissioners discussed how they wanted to move forward. Chairman Johnson said after all the comments he had received and 40,000 people in the county, he was bothered by the lack of public comment.

“Unfortunately we have a silent majority who we are not going to hear from,” Johnson said as he was critical about the fact no one from the public took advantage of the opportunity to speak.

Commissioner John Kolb said he received a lot of comments, mainly emails, with the majority against the project. He said he is a supporter of the hospital but really has to look at this project from a financial aspect. He said the risk of a $75 million debt was too much for him and added the county does not have those type of reserves if it defaulted. The thought of defaulting and losing the hospital was a major concern to Kolb.

He also pointed to the economy and the downslide it is on. Kolb explained with the economy being “certainly uncertain” it was just too much of a risk.

Commissioner Don Van Matre agreed and said the hospital has always been his number one priority. He said this would probably be one of the biggest decisions he would make in his life and if it were his money, he would not feel comfortable moving forward. He said he has been elected to oversee taxpayer money and again felt it was too big of a risk.

Hospital liaison Commissioner Reid West has a long history with the hospital, being part of the board several years back. West said this project started at a cost $4.5 million and has become a $50 million project. While he said the project is a needed project, he did not understand the need for the two added floors for office space. Again, while he wanted to see the project move forward, the $75 million price tag was too much.

For Wendling he said he is quickly learning about business. He said one concern he was approached with was why MHSC was not paying off the $25 million on the MHSC Medical Office Building before moving forward with this. He also spoke about the declining government budgets, and specifically pointed to hardships expected in the 2016-2017 fiscal year. Again, he said it was too much of a risk and they should look at options such as the sixth-cent tax.

Wally Johnson told a story about how he worked in a mine in Lander and there was a discussion about building a hospital. At the time, he told those looking to build the hospital the mine had enough reserves that it would be around for awhile. Johnson said the hospital in Lander was built, the mine closed and the hospital had to be sold. He said he has supported the hospital since day one and promised himself he would never do anything which would “jeopardize” the life of the hospital.

Like the rest, Johnson said it was too much debt and too much of a risk. He specifically advised the hospital to pay off the medical office building and then start focusing on the sixth-cent tax. Johnson stressed not only would it be less of a risk to go after the tax, it would be in the hands of the public to decide if they wanted it. He said the public has stepped up to the plate twice and has supported the expansion and the medical office building.

“We have done it before, we can do it again,” Johnson said about focusing on getting the specific purpose tax to fund the project.

The proposed project has been moving forward and recently had the major plan proposal for the project approved by the Rock Springs Planning and Zoning Commission.

After the decision on Tuesday, Chief Executive Officer of MHSC Jerry Klein told SweetwaterNOW he really could not say where they were going to go from here. He said he would take the actions and suggestions to the MHSC Board and talk about how they wanted to move forward with the project. He said after meeting with the hospital board they should have a better idea of what the plan would be moving forward. The MHSC Board meets the first Wednesday of every month at 5 p.m. at MHSC. 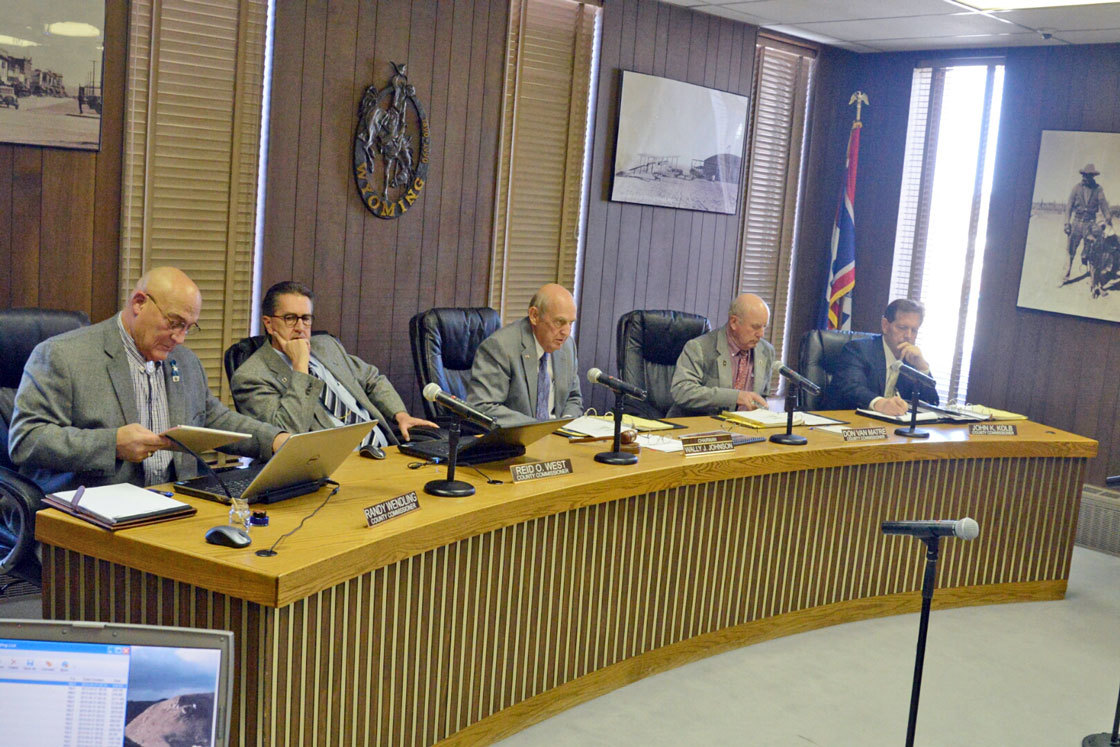