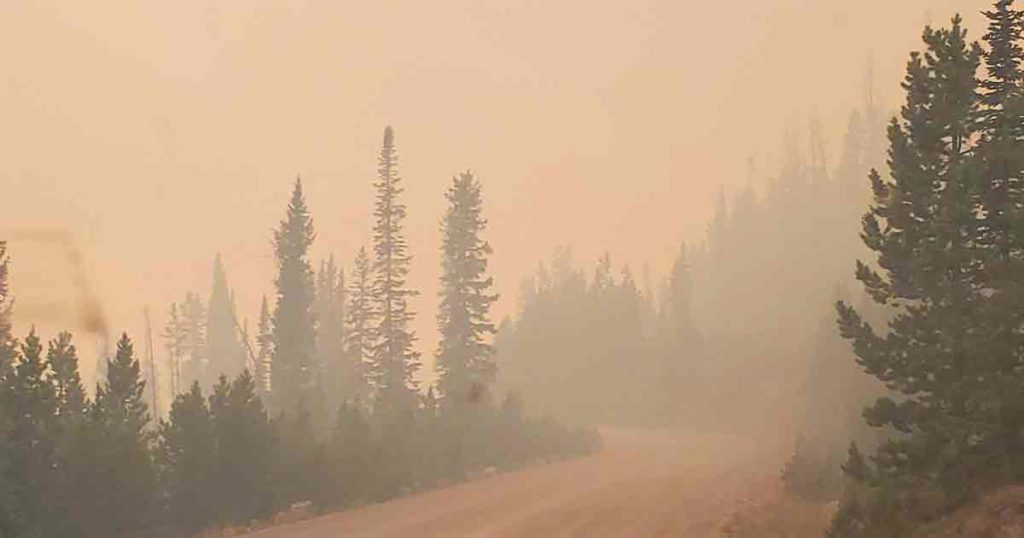 ALBANY COUNTY — The Mullen Fire, which is about 28 miles west of Laramie, is about 176,840 acres with 818 firefighters and support staff on scene.

To show the progression of the fire over the last month, the Mullen Fire Information Facebook page posted a video showing how the fire spread.

The video starts on September 17, which is when the fire was initially reported in the Savage Run Wilderness in the Medicine Bow National Forest. The video ends on Saturday, October 17.

The fire spread rapidly in extremely rugged terrain, with dense vegetation and beetle-killed deadfall and it continues to burn. So far, 66 structures have been damaged.

The video below shows fire spread of the Mullen Fire from September 17 through October 17. #MullenFire_WY

With the reopening of some roads and private land, firefighters want to remind those traveling on reopened roads that they will see smoke and smoldering fires, particularly at night. Firefighters continue to patrol, monitor, and mop up hotspots.

Yesterday’s precipitation helped quiet the fire in the higher elevation areas, however firefighters were halted in chipping and brushing operations due to unsafe travel conditions. This work will resume as weather permits.

The contingency line was completed near Centennial on Saturday.

Firefighters continue to work in the Foxborough, Fox Park, and Porter Creek areas. Suppression efforts will be completed in the coming days in anticipation of reentry into these areas.

Interior burning with visible flame and smoke is expected to continue until significant snowfall.

Residents accessing their property should remain alert for hazards due to smoldering or burning fuels, fire-weakened trees, and the operation of truck and heavy equipment used in firefighting, tree removal, and rehabilitation.

For evacuation and closure area information, please refer to the Albany County Sheriff Facebook page. https://www.facebook.com/Albany-County-Sheriffs-Office-618424944997540/ The cause of the fire remains under investigation.

Fire Weather
While the cooler weather has been helping in containing the fire, the wind has not.
Sunday: Mostly cloudy with a chance of showers. High 45-50. West winds 20-30 mph with gusts to 40 mph.
Monday:  Partly cloudy and warmer. High 50-55. Winds out of the west 15-25 mph.
Tuesday: Mostly clear. Lows in the 30s. Highs around 50. West winds around 15 mph.