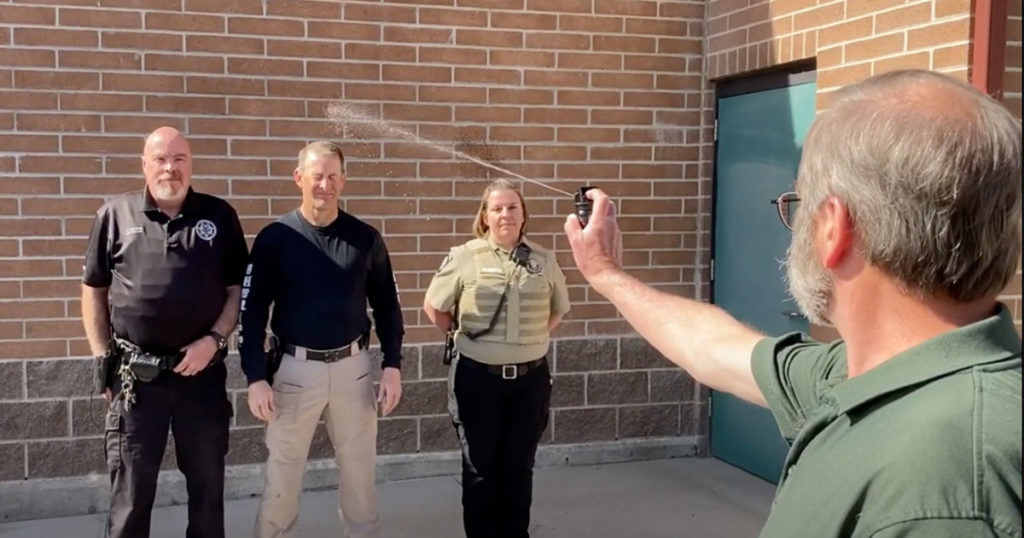 May has been a busy month of training and equipment maintenance for the SCSO. From firearms training and qualifications to Radar calibration, Taser training, vehicle maintenance, and even some new equipment demonstrations. One of the new items the SCSO is looking at is a new pepper spray, according to a press release.

Earlier this week Rick Crays with Rock Solid stopped by to demonstrate a pepper spray option which is new to the market. This new spray is described as a gel rather than the typical liquid oleoresin capsicum (OC) spray. The effects are similar in that this is still an eye and respiratory irritant; however, the gel is more focused, which prevents overspray, cross contamination, and re-contamination. It is also non-flammable. The company that makes this product out of Missoula, Montana also makes a new product that is a decontamination liquid. This product quickly neutralizes, cleans, and soothes anyone who has been exposed to any type of pepper spray including OC Spray, Mace, and even bear spray.

Sheriff K.C. Lehr volunteered to test out the new gel and decontaminant. If we deploy our current OC spray, both Lt. Dunning and Deputy Johnston who were standing by Sheriff Lehr, would have instantly been exposed and affected by the mist. Sheriff Lehr recovered from the exposure within the first 5 minutes after using the decontamination solution which would normally take at least 30 minutes to recover using water, the press release states.

“I’ve been exposed to many types of pepper spray in my career, and even though I only received a small dose of the Presidia Gel, it only took a couple of seconds until I was unable to open my eyes where normally I could fight through it,” Sheriff Lehr said. “The recovery time using the decontaminate was the real eye opener, no pun intended. We’re definitely going to be putting that in our facility to decrease the time it takes to decontaminate an individual or one of our deputies who has been exposed. I feel that we will also be looking at going to Presidia Gel as our current OC spray is either used or reaches its expiration.”