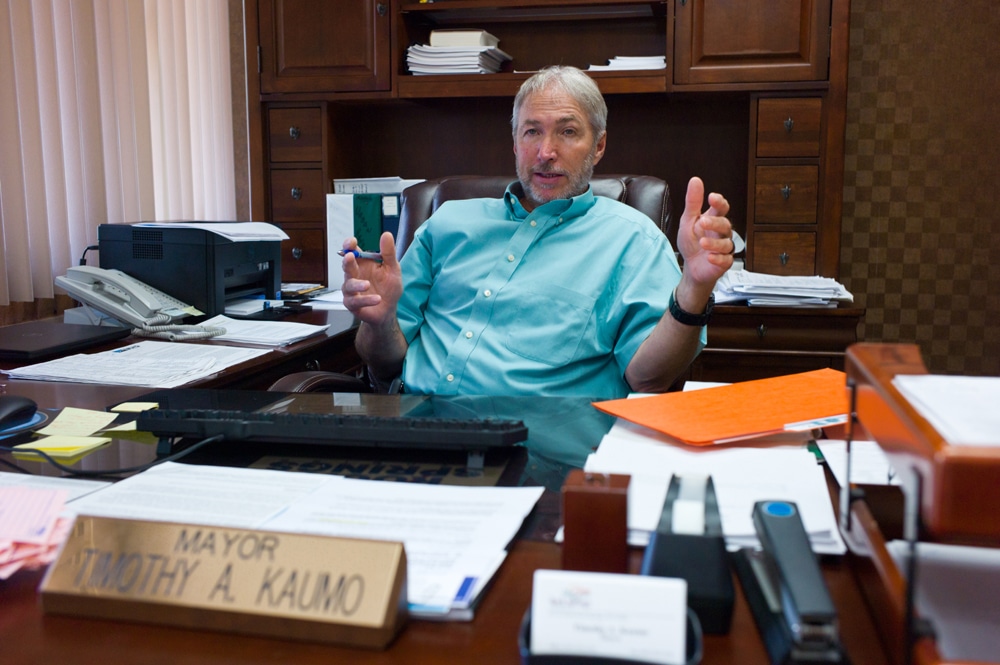 The shutdown of two coal mines in Gillette and the ominous outlook from PacifiCorp about the future of the coal-fired Jim Bridger Power Plant create “a lot of uneasiness in our community,” he says.

With some 800 people employed at the Jim Bridger plant and associated mines, coal is “a big player here,” Kaumo says. Against the backdrop of a 32% decline in the state’s coal production — from a high of 446 million tons in 2008 to 304 million tons in 2018 — worried residents approach Kaumo “all the time.”

Kaumo, a Rock Springs native and president of a surveying company, mulls his town’s future from a simple office that voters believe agrees with him. They have put the father of four in there three times — for two terms between 2003-2010 and again in 2018.

In his latest campaign, he promised a businesslike approach to get city government back in shape and to help diversify its economy. He understands the ripple effect of a shrinking workforce impacts all sectors of the community, he says.

The loss of one job at the Jim Bridger plant “will impact this entire community from the top down,” the mayor says. “Our mines are key. If we lost those jobs, we lose families, jobs in the classroom, teachers, clients, customers.”

Rock Springs has been wedded to coal since mountain man Jim Bridger guided Howard Stansbury’s U.S. Army survey party in 1850, according to the Wyoming State Historical Society. They found an outcrop of bituminous coal, “with every indication of its being quite abundant.”

Mining and railroading outstripped Rock Springs stagecoach business starting in 1868 with the arrival of the Union Pacific line. Since then a landmark arch across a major downtown thoroughfare proclaiming, “Home of • Rock Springs Coal • Welcome” has served as the city’s badge of honor.

“Everybody enjoys power — turning on the light switch, air conditioning,” he said. But, he posited, few people a thousand miles away think about the sprawling infrastructure, heavy equipment, sweat and toil at places like Jim Bridger that send currents to their homes.

“You take it for granted,” Kaumo said. As they clamor for renewable energy, few likely understand the fickle nature of wind and solar power, the mayor said.

“The term misunderstood may be the definition of what we feel,” he said. “The dependability of a coal-fired power plant and the energy provided is the most stable energy in peak times you will ever see.”

Kaumo made his statements in the face of national and industry-wide movements that disfavor fossil fuels because of worries about climate change and pollution. It may be understandable in a town whose voters are heavily dependent on fossil-fuel extraction for employment.

Coal supporters could get their message across, he said, “by simply turning off the power.

“Go to Jim Bridger,” he said, “and throw the switch.” When it’s 104 degrees and green power to the air conditioner flickers, people will realize the value of dependable coal, he said.

The industry gets a bad rap from environmentalists, the mayor said. People working in the energy field are “the best stewards of the land,” Kaumo said. “They hunt here, they fish here, they’re going to do their [reclamation, emission-control] job.”

“It’s nice to be green,” he said. “I support that.” But, like others throughout the Sweetwater County energy community, he harbors doubts about climate change.

“It has to be proven data,” he said of studies.

Third-world countries are burning coal “without emission controls,” Kaumo said. “Maybe the rest of the world should be doing what the U.S. is doing.”

Rock Springs is lucky, compared to Gillette, since there are other industries in the Sweetwater County that may help reduce the impact of coal’s decline.

“We have trona, oil and gas, soda ash,” Kaumo said. “We have some uranium. That helps but coal is certainly a large percentage of the minerals extracted and a large employer.” His campaign touted diversification through by tourism and called for development of a regional industrial park near the city’s airport.

Since 2010, the population of the city has been relatively stable, hovering around 23,000. Surrounding Sweetwater County has seen numbers dip by approximately 750 persons in eight years to 43,051 in 2018. A couple of thousand souls have moved on since a county zenith of 45,750 in 1982. School enrollment in the general area has increased, according to state statistics, although one district has seen declines.

Those figures may mask larger difficulties, however. Unemployment in Sweetwater was as high as 7.9% in 2009. A decade later it rests at 4.1%.

State revenues distributed to towns and counties have dropped, Kaumo said, as coal production statewide has declined along with associated taxes and other income.

“We’re already seeing a decline of revenue at the state level,” he said. “Our budgets are affected. We’re continually searching for grant dollars.”

Now the county is looking to increase sales taxes to fund capital projects. Officials are eyeing the so-called 6th penny Specific Purpose Excise Tax, a voter-approved measure, for infrastructure. Sweetwater voters have approved the tax in the past, he said.

“It’s sewer, water, wastewater,” Kaumo said of the likely projects. They are needs, he said, “not wants.”

Many energy workers who live in Rock Springs drive to work in oil and gas fields in neighboring Sublette County, creating an imbalance between tax revenues and impacts, he said. “We travel 85 miles north but the taxes [on energy production] go back to Sublette County,” Kaumo said.

The mayor said he’s complained to legislators and others “numerous times,” about the state’s revenue distribution system. “Common sense has to come into play,” he said.

Despite statistics regarding the school population, Kaumo said he’s seen cutbacks, including the loss of a teacher/coach who left the community after a district reduction. His wife worked at Jim Bridger.

Such emigrations have consequences. Some take a loss on their dream home, the mayor said. The school district suffers from state-level funding cuts due to lower enrollment.

“It’s a snowball effect,” he said.

The city county governments’ goal is to improve quality of life for residents. But that “becomes harder and harder to do when you see families move.”

Rock Springs also has a subsidence problem caused by old, abandoned underground mines. Every now and then parts of the city sink, jeopardizing buildings.

“Our entire city is undermined by coal mines,” Kaumo said. “We have buildings that are collapsing.”

Today, federal Abandoned Mine Lands funds, generated by ongoing coal sales, help offset the effects of subsidence. But if the region’s coal mines shut down, that source of money will disappear.

This is just one more reason for Kaumo’s campaign to preserve coal. He is an ambassador for his cause, he said.

“I can tell you the mayor is always on the road,” he said — to Cheyenne, to Washington, D.C., to PacifiCorp offices. He wants the country to realize that the benefits from coal are multi-faceted and crucial.

“The entire nation should clearly understand the dependence of coal,” he said. “I don’t ever see us getting away from some sort of energy from coal.”

Yet the future of the Jim Bridger units weighs heavily on Wyoming’s fifth-largest city, mayor Kaumo said. “I hate to think the mothballing of that plant is even a thought.”

This article has been edited to remove a reference to a stage stop when it did not yet exist and to correct three typographical errors — Ed.

This is one of seven stories in WyoFile’s “Powering Down” special edition. Click the links below to read more:

Jim Bridger: Lighting the country, laboring in the dark

Life beneath the earth in Wyo’s only underground coal mine 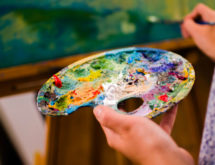