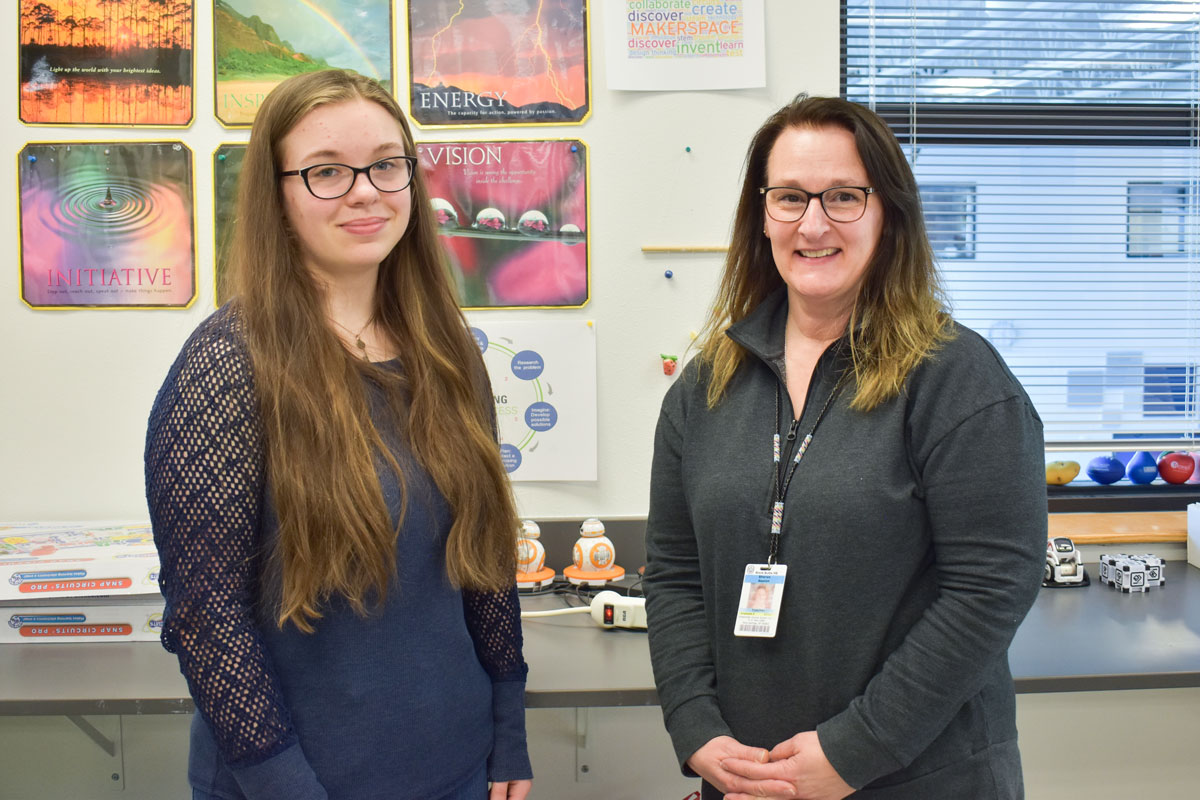 Quincy Stewart (left) and Sharon Seaton (right) both received awards in recognition of their work in the computer science program Girls Who Code.

Seaton, Girls Who Code and BBHS Robotics sponsor has been named the 2020 Wyoming Affiliate Educator Award winner for the Aspirations in Computing (AiC) Educator Award. This award recognizes educators who have demonstrated a commitment to encouraging young women’s computing interest.

Stewart, a sophomore and Girls Who Code team member at BBHS, has been named a 2020 Wyoming Rising Star Award Winner from The National Center for Women in Information Technology.

According to Seaton, Girls Who Code is a national program that promotes women in programming and computer science careers. It provides curriculum and incentives to get the girls involved in the science arena. Each year, the team competes in the Girls Go CyberStart competition, in which the teams solve online puzzles using computer science.

The competition gives scenarios where the girls are cyber security agents and must intercept and decipher different hidden messages and solve puzzles.

Surprised to Receive the Awards

Seaton has been the coach and advisor for the Black Butte Girls Who Code team for all three years the club has been active in the school. Stewart has been a member of the team for two years.

In October, the Wyoming Department of Education emailed teachers, including Seaton, asking them to nominate young women in their STEM and computer sciences programs for the 2020 Wyoming Rising Star Award. Seaton nominated Stewart.

Stewart said she was surprised when she saw she had won the award. She said a lot of time went by between applying for the award and receiving word that she assumed she had lost and that’s why she hadn’t heard back.

“Then, I was just checking my emails one day and one said ‘Congratulations’ so I went and looked at it and saw that I had won,” Stewart said. “I was like, ‘Wow, I can’t believe it.’ I was so convinced I hadn’t placed at all.”

Seaton said it was the next day when she received her email congratulating her on her own award.

As part of their recognition, they both have been invited to attend a reception at the University of Wyoming’s College of Business Atrium on April 9, in which they will be honoring several different areas of women in STEM. They will be recognized as part of the reception.

Though Stewart is not too keen on being publicly recognized, she said she is looking forward to it.

“It’ll be nice to get a certificate with my name on it. It will seem more real then,” Stewart said.

Stewart got into Girls Who Code when she first started high school her freshman year. Mrs. Seaton told her science class about the club and it intrigued Stewart.

“I thought it sounded cool and would look good for colleges,” Stewart said.

During the first semester, the girls were learning the basics of how to code for different websites, but in January or February the curriculum began implementing games to apply the coding.

“I got really into it and was having a lot of fun. I didn’t start to really love it until we got to the games,” Stewart said.

However, despite Stewart’s success with the club, she started off doubtful of her abilities in computer sciences.

“I signed up for the club but I was scared it would be a little too advanced for me,” Stewart said.

Seaton said that one of her favorite parts about being a coach is that she gets to watch the girls work through those doubts and come out with the attitude, “I can do this.”

“I see them find their one strength. For example, Quincy is very good at solving puzzles,” Seaton said. “Other girls are good at finding hidden messages. So they find out what their strengths are and then they work together as a team and collaborate together to solve puzzles.”

In its third year at BBHS, Girls Who Code has 16 team members, of which 13 are from BBHS and three are from Rock Springs Junior High. This year, 14 of the 16 team members have been selected to move on to stage two of three stages in the Girls Go CyberStart competition.

If the team is selected to move on to stage 3, Seaton will be tasked with choosing just four of the girls to compete in an online capture the flag competition.

Seaton said there is a leader board and as of last Monday, the BBHS team was number two in the state of Wyoming.

“That’s exciting,” Seaton said. “There’s teams all over Wyoming, and believe it or not, Wyoming has the highest participation of girls in Girls Go CyberStart per capita. We may be little but we’re mighty.”

The Wyoming Department of Education and the Governor’s Office have been supportive of getting computer sciences in schools, Seaton said. She added that the computer science legislation passed and will go into effect in 2022.

“Black Butte is really ahead of the curve as far as having the Girls Who Code club. We also have a robotics club,” Seaton said. “Our high school is really trying to get ahead of the game to help students like Quincy be able to have those skills.”