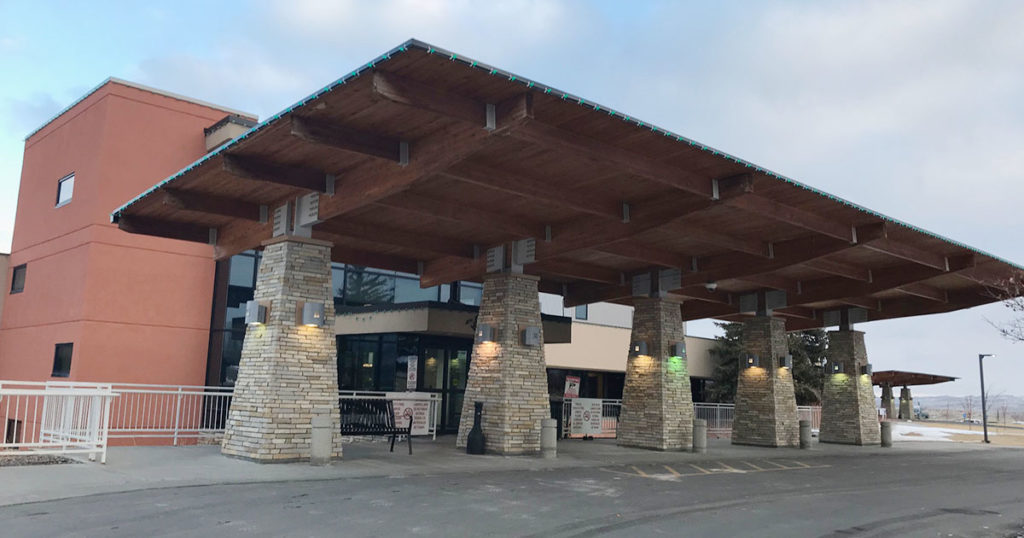 The funding designation will be contingent upon whether the hospital receives American Rescue Plan Act (ARPA) grant money.

MHSC will be applying for two Health and Human Service Capital Construction ARPA grants from the State Lands and Investments Board. If the hospital receives the grants, there will be a 1:1 grant match that the county has promised $3 million to help cover.

Tiffany Marshall, MHSC Foundation Executive Director, explained that the two proposed projects that MHSC will apply funding for include a lab renovation and expansion project and a Medical Office Building (MOB) renovation. The lab project is estimated to cost around $8.7 million to complete, while the MOB renovation is expected to cost about $2.2 million.

If approved by SLIB, the lab project will be funded for $4.35 million, and then the county and the hospital will be required to match it. The MOB renovation grant would be $1.1 million requiring a match of the same amount.

“Our first priority obviously is the lab renovation and expansion,” Marshall said. “I think it would be a tremendous benefit to our community. It would be able to meet all the needs that we had during the pandemic while somewhat planning for any future pandemics that I hope we never have.”

While the County Commission offered to put forth $3 million for the grant matches, Marshall said the hospital will have to provide the rest, and possibly with help from the Memorial Hospital Foundation. She said that the Foundation makes around $400,000 to $900,000 on average each year through fundraising efforts including with the Red Tie Gala.

Since then, the lab has remained at the Foundation office which has dislocated Foundation and legal staff. Having the lab at that location has been advantageous as there is immediate access to the lab and it minimized foot traffic in the hospital. However, since it is a temporary location, it is not accommodating to patients in terms of plumbing and HVAC systems, and staff has been scattered across both laboratories. Additionally, specimen transportation is unsafe between the two labs during winter months.

Through renovating and expanding the lab, it would address all the issues while continuing to minimize foot traffic and provide easy access to the lab.

Marshall said that the MOB renovation is necessary because the current layout of the first floor does not allow for proper social distancing.

The MOB currently houses 15 specialty service with six of those services being offered on the first floor. Those services include: obstetrics/women’s health, pediatrics, neurology, internal medicine, pulmonology, and University of Utah clinics.

With this many services provided on just the first floor, Marshall explained that the building gets a lot of foot traffic. However, the design of the floor hinders patients’ ability to navigate the building. She said the current design includes a fireplace at the entrance to make for a welcoming waiting room.

The size of the areas in both the front of the fireplace and behind it are too small to allow for immunocompromised patients to social distance while in the waiting area. Marshall added that the fireplace hinders patients’ vision which has increased unnecessary foot traffic throughout the first floor waiting area.

In addition to the fireplace issue, the air exchange at the entrance sends a blast every time the door opens which is done to regulate the temperature of the building. But those blasts spread airborne antigens throughout the entrance.

The renovation plans are to remove the fireplace to allow for additional space for social distancing and to install doors with air exchange.

Is Now the Time for These Projects?

Commissioner Roy Lloyd questioned whether these projects, and specifically the MOB renovation, is a want or a need.

“In a tough economic times, is this more of a want than a need? Is it going to delay the essential ability to provide services?” Lloyd asked.

Marshall explained that though the hospital may not be in “dire” need, it is still a necessity to the hospital.

“I don’t think we’re in absolute dire need but I think when we’re looking at ways to combat the pandemic and keep our patients seeking services safely, it’s definitely a necessity,” Marshall said.

Hospital CEO Irene Richardson added that since the funding is available at a 1:1 match, it’s an opportune time to apply for the grants and not only receive money for it but to meet the needs of the hospital’s patients.

“SLIB offered these funds, so now we think is an opportune time to be able to receive at least half the funding,” Richardson said.

Commissioner Randy ‘Doc’ Wendling claimed that this project is necessary due to “contagious infective antigens” that “are showing up in worse numbers even more critical than before COVID started” across the world.

“I think you have to be a bit of a visionary with this project. To sit here and say it’s not needed is not totally accurate,” Wendling said.

He added that projects such as these will eventually need to be done anyway, and that the current lab set up is “not a good set up. Period.”

This is about our community, it’s not about money. It’s about doing right for the people that live in this community.

Commissioner Lauren Schoenfeld said from an economic development standpoint the hospital is a top three priority for recruiting and retaining industries and individuals. She added that with the Cancer Center and the University of Utah clinics, Sweetwater County has a lot of healthcare resources that aren’t available in many other parts of Wyoming.

Schoenfeld also said that the lab renovation and expansion was not placed on the Specific Purpose Tax ballot because there are “other opportunities to use federal funds” for it which include the SLIB grants.

“There is a healthcare crisis across the state… we have what a lot of other communities don’t have and we’re very blessed to have that. I agree, Commissioner Wendling, that we do need to look at where we can develop, where we can expand, while still utilizing those federal dollars and not putting the burden on our taxpayers where we can,” Commissioner Schoenfeld said.

The Commission voted 4-1 to approve designating $3 million to support the hospital and to help cover the grant matches if received.

Lloyd was the lone vote against the measure stating that if they are going to give this sum of money to the hospital, they should open up the option for other entities to possibly get their projects funded by the SLIB grants.

“I think if we’re going to give that much money out to one entity, I think we should also open up the process to other entities, because there were other entities that asked to be on sixth penny that had valuable projects and I think we should hear them all. And then if we have that extra money, vet it out and make that decision as a commission where that money should go,” Commissioner Lloyd said.

Chairman Jeff Smith argued that other projects from other entities may not qualify for the SLIB grants, and many may not be ready to apply by the August 14 deadline.