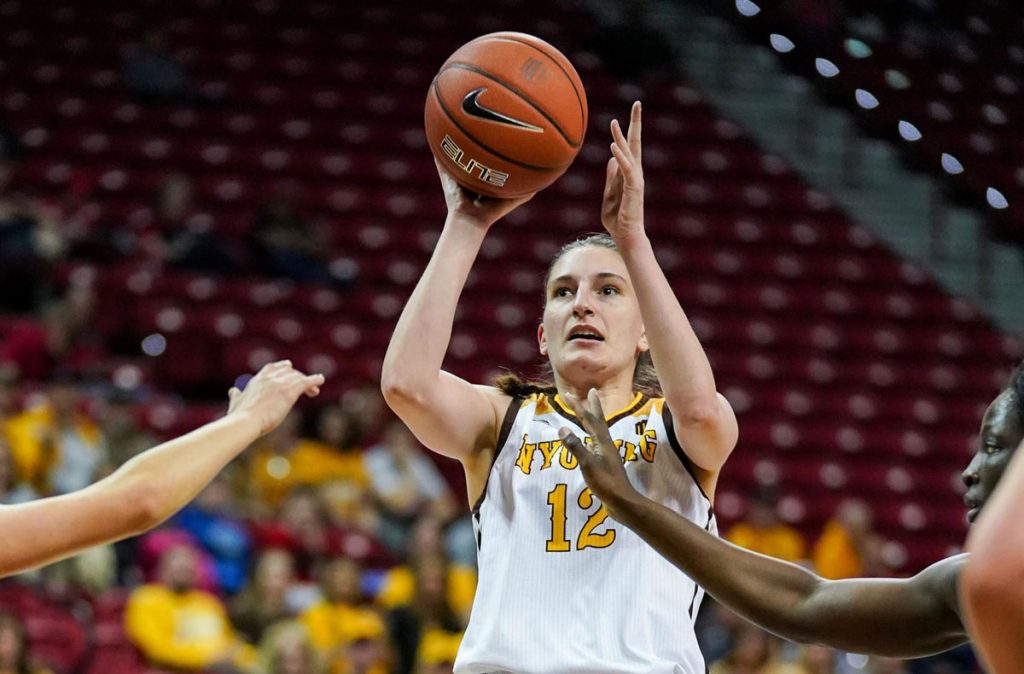 LAS VEGAS, Nevada– The Wyoming Cowgirls held sixth seeded Utah State to 35 percent from the field and held a 35-23 advantage on the glass in a 64-41 win in the quarterfinals of the Air Force Reserve Mountain West Championship in the Thomas & Mack Center in Las Vegas.

“I thought our senior leadership showed tonight,” said head coach Joe Legerski. “Marta (Gomez) and Bailee (Cotton) have been through so much in this tournament, being seniors that have played extensively. The same with Clara Tapia. We talked about our big start and what we wanted to do defensively. I thought we executed at a high level.”

Wyoming had a 16-point halftime lead (37-21), as it was the largest since leading by 17 against Air Force on Feb. 6. Wyoming dominated in the paint scoring 30 points. The Cowgirls have scored 20 or more points in the paint 22 times this season.

Senior Marta Gomez recorded 19 points against the Aggies. It’s her 25th double figure scoring game of the season and her 70th of her career. With her start against Utah State, Gomez has played in 122 career games which is tied for seventh all-time with Kayla Woodward and Kaitlyn Mileto.

Senior Bailee Cotton finished with 14 points and nine boards. It was her 18th double-figure scoring game and the 36th of her career. Senior Clara Tapia scored in double figures for the first time this season and the 15th time in her career with 10 points.

“When you have players like Marta and Bailee, get you going offensively, makes it a game, where all of a sudden in the second half, we can kind of determine how we want to play it, whether we want o speed it up, slow it down,” Legerski said. “I thought the first half really gave us that opportunity.”

Gomez opened the game’s scoring with a running jump shot, but the Aggies answered right away on their first trip down the floor. After trading baskets again, the Cowgirls went on a quick 9-0 run capped by a Cotton layup to jump out to a 13-4 lead at the 4:09 mark of the quarter.

Gomez hit a pair of free throws to put the Cowgirls up 20-9 with 1:57 to play in the opening frame. Rakovic added a layup on Wyoming’s last possession of the quarter, and the Cowgirls led 23-11 after one period of play.

Cowgirls Head into Halftime with a 16-Point Lead

Dufficy opened the second quarter’s scoring with a jump shot in the paint, and Cotton added a free throw for the Cowgirls on the next trip down the court. After an Aggie jumper, Erjavec scored a three from the left wing to maintain UW’s double-digit lead, 27-15, at the 7:25 mark.

After a short 4-0 run off jumpers from Gomez and Cotton gave the Cowgirls a 13-point lead, 33-20, the Aggies called time with 2:40 to play in the half. A Weidemann floater in the lane and two Cotton free throws gave the Cowgirls the 37-21 lead at the halftime break.

Gomez bookended an 8-2 run to start the second half with a jumper from the far baseline and a spinning jumper in the paint to force an Aggie timeout at the 6:14 mark with UW leading, 45-23.

Gomez scored a three from in front of the Cowgirl bench to push the lead to 50-23. The Aggies ended a four-minute scoring drought with a layup, but Tapia answered with a driving score of her own. The teams traded scores to end the quarter with Wyoming leading 52-31.

UW to Continue On in the MW Championships

Erjavec scored an elbow jumper to start the final period, but the teams traded points on the first possessions, and the Cowgirls held a 56-35 lead at the 6:32 mark.

A mini 8-4 run for Wyoming gave the Cowgirls a 64-39 lead with 1:56 to play in the game. The Cowgirl reserves finished out the game, and Wyoming took the victory in the quarterfinals of the Mountain West Tournament.

The Aggies were led Shannon Dufficy with 17 points and nine rebounds. She was 8-of-20 from the field.