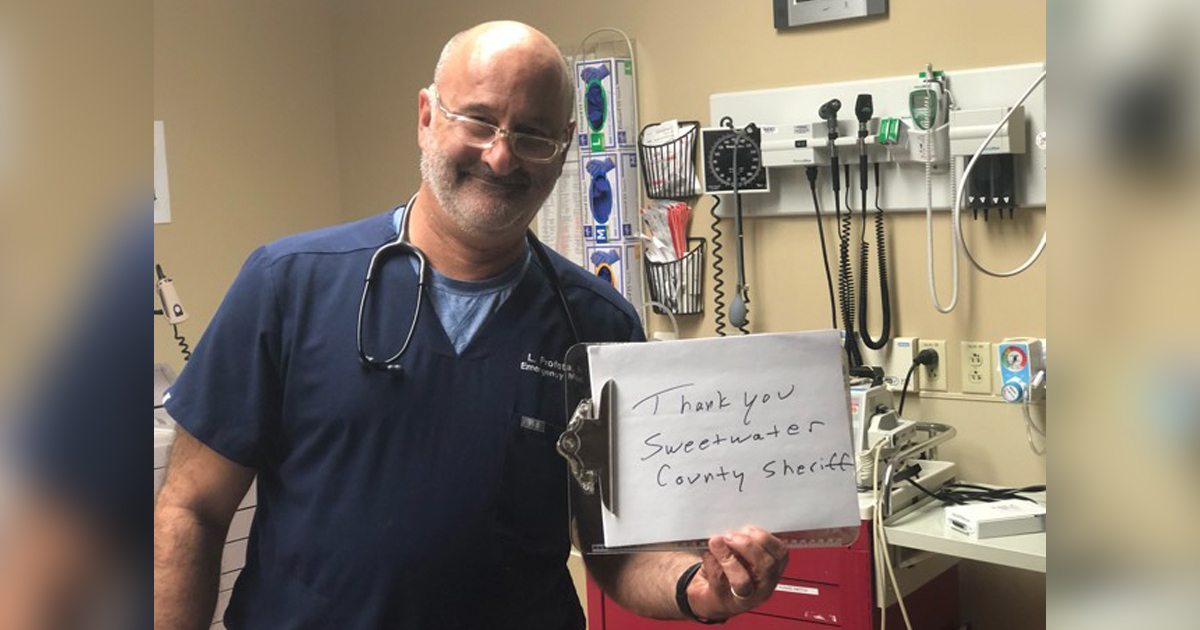 Dr. Louis Profeta shared a viral thanks to the Sweetwater County Sheriff's Office after his message was seen worldwide.

ROCK SPRINGS — We’ve all seen the messages shared by law enforcement units across the country.

The messages are clear reminders designed to keep drivers constantly aware of their personal safety. “Click It, Or Ticket”…”Drive Sober or Get Pulled Over”…and “Alert Today, Alive Tomorrow” are just a few of the common slogans we see on billboards, television and other media outlets.

Recently, Sweetwater County Sheriff’s Public Information Officer Jason Mower was looking to put a more local spin on these roadway safety campaigns for the holiday season. He wanted to create a message that would resonate on a deeper level.

“Not that those other slogans aren’t important and powerful,” Mower said. “But people hear and see them so often that I think sometimes they can tune them out.”

So after some research, Mower came across an article published by Dr. Louis Profeta, an Indiana doctor who experienced a profound moment one night back in 2018 in his North Indianapolis emergency room.

Dr. Profeta first posted his message on LinkedIn about a week after a young man, roughly the same age as Profeta’s son, came to the St. Vincent Hospital ER having been shot in the face and killed.

He picked up the boy’s ID, turned to a nurse and said “I’ll check your Facebook profile before I go in and tell your mother you’re dead’,” as if speaking to the deceased boy in front of him.

“Human nature makes you think that someone did something wrong to get in a certain predicament. But I looked at his Facebook page and completely misjudged who this kid was in terms of his character and his life,” Profeta said.

About a week later, while he was watching a college football game with a friend, the idea struck him to write an article about his comment in the ER that night. Roughly 15 minutes later he told his friend, “you want to see what’s going to be one of the most read articles in the world?”

The message did in fact reach a worldwide audience after the LinkedIn post was later shared by other media outlets. But “for some reason it just blew up” when Mower shared it on the Sweetwater County Sheriff’s Office Facebook page, said Profeta.

“There was something about people being able to weigh in and share stories about their own kids being killed, and something about the way the Sweetwater Sheriff’s Department wove it in that really resonated,” Profeta said.

Mower confirmed last week that the article has reached more than 14.5 million views from all over the world.

“I can’t tell you how many of my friends have come up to me and told me they’ve read this post from a sheriff’s department in Wyoming,” Profeta added. Because of their connection and the response to its post, the SCSO has named Profeta an Honorary Deputy.

The Definition of Love

Profecta says many people have come to him to share stories about how they were treated by other doctors in their times of trouble. He wants to ensure families that doctors are grieving in these situations too.

Through a series of college campus lectures, YouTube videos, and even a TED Talk on National Public Radio, Profeta is spreading his message of love, grief management, and understanding the impact these loses have on a family.

“It’s creating a framework for parents to sit down and talk to their kids and say ‘this is what my life will look like if I lose you’,” he said. “You want the definition of love? Take the deepest, darkest, most unimaginable grief, and that’s where you find love. And you know where that grief is? Its the death of your child.”

Profeta didn’t write his article necessarily to illustrate the dangers of distracted driving, although it’s certainly applicable in those circumstances. He wrote it to remind people that their decisions can often have disastrous consequences that linger far beyond their choices.

Jason Mower and the Sweetwater County Sheriff’s Office shared that message. Its impact continues to echo throughout the world during this holiday season.