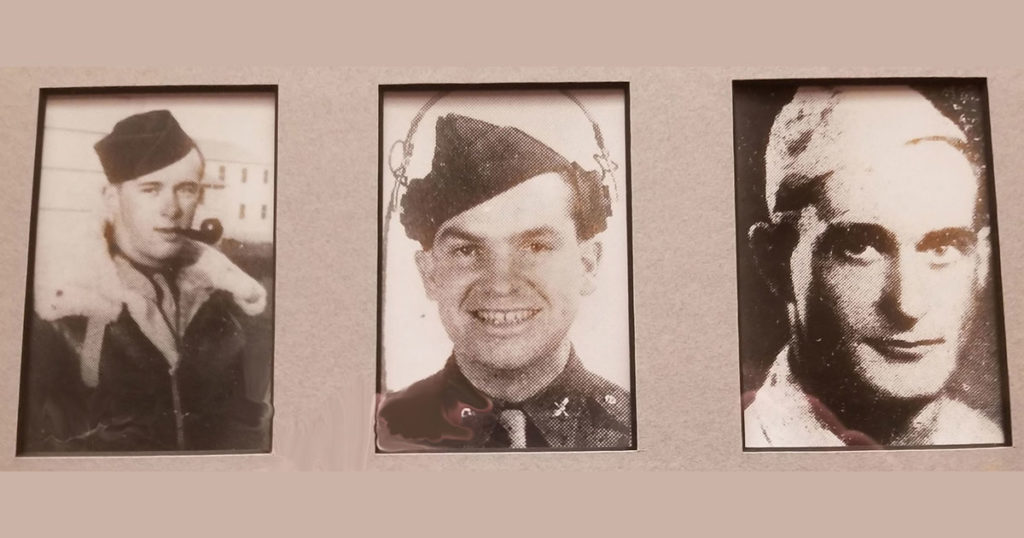 The City of Green River named streets after Floyd Hoover, Donovan Astle and Ernest Pelser, to name a few.

GREEN RIVER — Eleven streets of Green River’s Rancho Subdivision, south of the Green River and east of Uinta Drive, were named for servicemen who died during the course of their military service in World War II or the Korean War, according to the Sweetwater County Historical Museum.

The streets originally bore names that included those of explorers and pioneers such as Ashley, Powell, and Bridger, but in 1952 the Green River Town Council passed an ordinance that changed them to those of servicemen who died while serving their country from 1942 to 1945, plus one soldier who was killed in Korea in 1951.

These men, in alphabetical order, were:

Paul Andrews
Sergeant Paul Andrews, an infantryman in the United States Army, was killed in northern Italy on May 15, 1945, in a vehicle crash. Only a few days before his death, he had written his aunt in Green River, Mrs. Fred Pitchford, about the fighting in the closing days of the European war. In civilian life, he’d worked as a callboy for the Union Pacific Railroad. (Railroad callboys were responsible for ensuring that train crew members were on hand for their regular runs.)

Donovan Astle
2nd Lieutenant Donovan A. Astle, a bomber navigator in the U.S. Army Air Corps, was killed in action on September 3, 1943, during the Italian campaign. His body was found in the waters off  the coast of Italy by a fisherman named Emidio Giorgini, who recovered it and brought it ashore. Giorgini later wrote a poignant letter to Astle’s parents in Green River about finding their son, who was interred in an American military cemetery in Italy. Prior to his enlistment, Astle worked as a telegraph operator for the Union Pacific Railroad.

Derrell Barnhart
Private Derrell Perry Barnhart, United States Marine Corps, was killed in action on Iwo Jima on March 11, 1945. A rancher and railroad switchman before his enlistment, he graduated high school in Green River in 1938 and married Agnes Bernice Bahan in 1941.

Robert Bramwell
Robert James Bramwell, United States Army, died after a brief illness at the Wyoming General Hospital in Rock Springs on September 17, 1943. He grew up in Green River and was home on furlough at the time of his death at age 40.

Leonard Clark
Private First Class Leonard W. Clark, 24th Infantry Division, was killed by a mortar barrage in Korea on July 13, 1951. He attended high school in Rock Springs and Green River before being inducted into the Army in 1950. Prior to this military service, Clark worked as a mechanic and machinist’s helper at the Union Pacific roundhouse in Green River. He was awarded the Purple Heart, the Combat  Infantryman’s Badge, the Korean Service Medal, the United Nations Service Medal, the National Defense Service Medal, the Korean Presidential Unit Citation, and the Republic of Korea War Service Medal.

Floyd Hoover
United States Army Air Corps Staff Sergeant Floyd Hoover, a B-17 tail gunner, was killed in action on June 14, 1943, on a bombing raid over Europe. Hoover graduated high school in Green River in 1941, and was “one of the very first Green River boys to leave for intensive training – Floyd left Green River in Sept. 1941 as a member of the Military Police company of the 41st Division. He later transferred to the air corps and served in North Africa and in England.”

Bert Jensen
1st Lieutenant H. Bert Jensen, an Army infantry officer, was killed in action on New Guinea on July 24, 1944. Along with Floyd Hoover, he was among the first men from Green River to enlist during World War II; in fact, he and Hoover left Green River to begin their service together, in September of 1941. In December of 1944, he was posthumously awarded the Silver Star, the American military’s third-highest decoration for valor in combat.

John Logan
Private John E. Logan, United States Army, died in Germany on May 25, 1945, of cerebral hemorrhage. Born in Rock Springs, he was a member of the Green River High School Class of 1942. Valedictorian of his class, he attended the University of Wyoming School of Engineering for one term prior to enlisting in May, 1943.

Norman Nolan
Army Corporal Norman L. Nolan, a graduate of the Green River High School, died in a military hospital on May 4, 1945, as the result of wounds received in combat on Okinawa. He enlisted after studying law at Creighton University and was assigned to an infantry company.

Ernest Pelser
Army Technical Sergeant Ernest Pelser was killed in action near Metz in northeast France on November 2, 1944. A tank driver, he’d been a rail worker in Green River before enlisting.

Howard Schultz
Corporal Harold L. Schultz, U.S. Army, 32, was killed in action in Germany on February 23, 1945. He attended high school in Green River and, at the time of his enlistment with the Corps of Engineers in December of 1942, was employed as a Union Pacific locomotive fireman on the run between Green River and Evanston.

A special display honoring the 11 servicemen can be found on the ground floor of City Hall in Green River at 50 E 2 N Street.

Museum staff expressed their special thanks to Jason Brown, GIS Analyst for the City of Green River, for his help in preparing this article.

The Sweetwater County Historical Museum is located at 3 E. Flaming Gorge Way in Green River. Museum hours are Tuesday through Saturday, 9 a.m. to 5 p.m. There is no charge for admission.