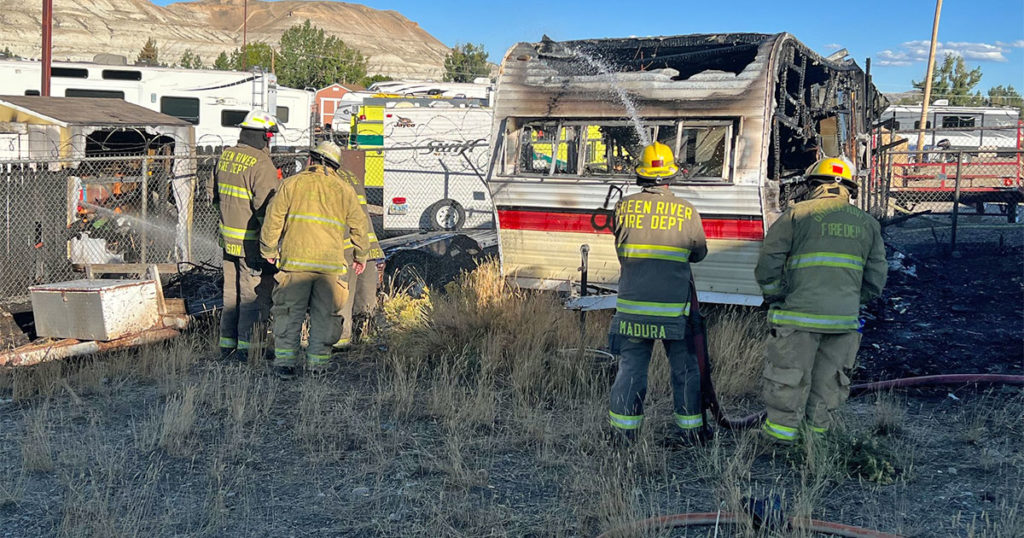 GREEN RIVER — An investigation will continue after it was determined the cause of a camper fire in Green River yesterday was matches, according to the Green River Fire Department.

Assistant Chief Bill Robinson arrived on scene and discovered that it was not a grass fire, but a structure fire involving a camper, the release states. The fire began spreading to both sides of the camper where a flatbed trailer, fence, and shed caught fire threatening a mobile home nearby. The other side of the camper, fire spread to a garage style storage shed and a vehicle.

Upon the first engine’s arrival, led by Captain Austin Rider, Robinson made the decision to attack the fire which was threatening the mobile home. While GRPD officers evacuated the home, GRFD was able to extinguish the fire, protecting the home. Firefighters stopped the advancement of the fire on the other side towards the garage area and the burning car.

“Due to the quick actions of firefighters, police officers, and EMS, no major structures were lost in the blaze,” according to the release.

During the investigation, it was found that the fire started in the camper with matches. Further investigation is ongoing and investigation efforts have been turned over to the GRPD. Two engines and 14 firefighters fought the fire. No injuries were reported.

“Thanks to all departments for the efforts in making this incident turn out the way it did,” Robinson said. “Due to the joint efforts and quick responses of all departments, nobody is without a home tonight from this fire and all responders remained safe.”