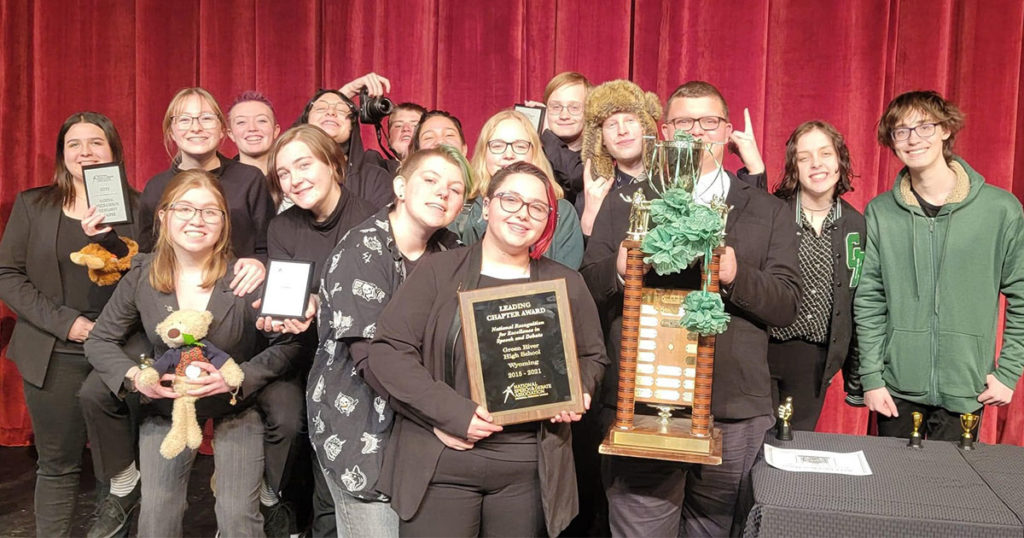 GREEN RIVER — The Green River High School speech and debate team has a reason to celebrate as eight of its members qualified for the 2022 national tournament in Louisville, Kentucky, to take place in just a few weeks.

The 2022 National Speech and Debate Association (NSDA) National Tournament will run the week of June 12-17, in which eight of GRHS’ top speech and debaters will compete. Of the 39 members of the team, Abigail Mattson, Douglas Leffers, Mia Worrell, Mason Tollefson, Abby Smith, Faith Duncan, Laural Kurth, and Carter Tuttle will strut their stuff on the national stage.

Parson said the team is very young, with just four seniors, five juniors, and the rest of the 39 members being underclassmen.

“These eight kids managed to finish in the top 1 to 2 percent, and earned a chance to represent Green River High School and our community in Louisville, Kentucky, this year,” he said. “They don’t shy away from healthy public discourse, they seek it out. Something that’s becoming rare.”

Proud is not a strong enough word for what I am of these kids. I am inspired by them, and frankly, I think you all should be too.

Of the eight competitors, their skills at the speech and debate podium scan a variety of events. While some qualified for nationals with their storytelling and poetry performances, others are representing their team and school in the congress debates. Below are the competitors, the events they qualified in, and a short statement on what their event is.

“I act out a children’s book,” Mattson said. She said some people may wonder why that is important, to which she said, “sometimes things have to be fun and I know that childhood stories are especially important for kids and can be an impactful part of their lives.”

“We get a topic at the very beginning of the year and we have the entire year to prepare both an affirmative and a negative for that argument,” Leffers said. “This year, the argument was religious practice and belief benefits societies.”

“I don’t write the poems myself, of course, but I actually interpret other peoples’ words. In poetry you normally have one topic that you cover with multiple poems,” Worrell said. “My topic is learning how to love yourself and not changing who you are for anybody else, because that is genuinely important.”

“You might be thinking, ‘drama? Isn’t that a theater kids thing?’ Yeah. And I’m not shamed. I get to make people sad,” Tollefson said.

“You write a persuasive speech and you get to choose whatever topic you want, and you go and try to convince the judge that your topic is correct. And then you give them a call to action and after your round you always want the judge to walk away thinking, ‘ok, how does this affect me?,'” Smith said. “I feel the topic of boundaries isn’t brought up enough in serious conversation, it’s more in passing, so it’s a good topic to talk about in oratory round because you’re going out there and you’re making people think.”

“It’s one of the most boring speech events but it’s really important to me. Each round I get a question like, ‘Will the French oil deal be beneficial to Uganda?’ and then I have 15 minutes to write a speech with 10 different sources in it, and then another 15 minutes to memorize it. Then I deliver it to the judge,” Duncan said.

“It’s basically a one man show, so when I’m performing I get to put myself into someone else’s shoes, but mainly I get to make people laugh. Which I really enjoy doing,” Kurth said.

“Congress is boring, however, we all know that in the status quo there are so many problems, and of course the only way to solve those problems is through legislation,” Tuttle said.

The students are looking forward to their national experiences, not only for the competition, but for the friends they’ll make along the way.

“I get to see other peoples’ cultures and make brand new friends, and lifelong friends that I get to take with me everywhere. I think that’s beautiful,” Tuttle said.

Parson said that along with qualifying for nationals, Worrell, Mattson, and Leffers were the team captains this past year. He said they are “true leaders.”

In addition to the students who worked hard all year, Parson also gave credit to the assistant coaches Nick Hoskins and RaNae Johnson, and three volunteer coaches, who dedicate their time and expertise to the team.

This is the world’s largest and most prestigious speech and debate competition, it’s an international competition… it’s the best of the best. It’s exciting and they are going to represent us all very well, we can all be very proud of them.