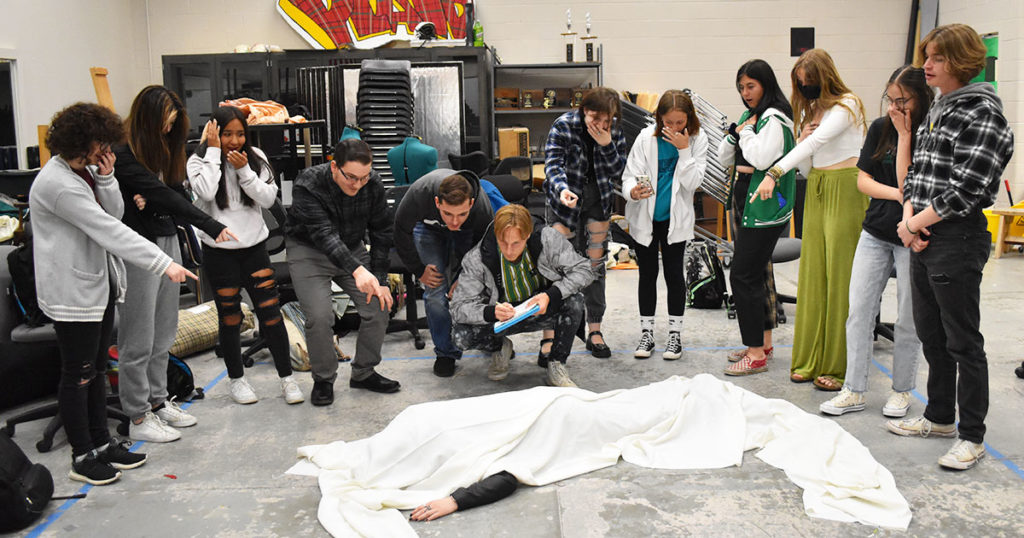 The GRHS theatre department will be hosting its final performance of the season on Wednesday with Café Murder.

GREEN RIVER — The Green River High School theatre department is preparing for its final performance of the year, Café Murder, which is a murder mystery play within the department’s annual award banquet and will take place Wednesday evening.

Café Murder is a murder-mystery centered around Rosemary and her four sisters as they celebrate Rosemary’s birthday at a restaurant. When Rosemary (played by Ellie Phillips) disappears, the cast and audience work to figure out who murdered Rosemary. The actor playing the maître’d of the restaurant, Ivan Miller, said that “the food is worth dying for.”

“Our main character is having her birthday at this Café Murder, and there’s a point where all of the cast leaves and then we come back and we’re missing the main character,” cast member Abigail Smith said, who plays one of the sisters, Volleny. “Then the audience gets to choose who did it and then we go into whoever they choose.”

“With great help from the amazing detective,” Jacob Shieve said, who plays the detective. “I’m the brilliant, young, decisive detective that learned through the great academy of NCIS.”

Smith is playing one of the sisters, Volleny.

“She is a truck driver, she’s the yeehaw sister,” Smith said.

Madilyn Grubb, GRHS theatre member who works behind the scenes and will be helping present awards Wednesday night, explained that they chose to do Café Murder because of the flexibility they had with the script.

“We got the idea because we wanted to do a dinner theatre and it fit very well in the script where we could throw in areas where we can serve food to our audience, and then we liked it because we can change the script a bit to fit our cast,” Grubb said.

The way the performance works is after Rosemary goes missing and a murder case starts, the audience, who are also standing in as dinner patrons within the play, serve as witnesses to the events. The audience then takes part in the direction of the play and in figuring out who committed the murder.

GRHS theatre member Rilee Rodgers said that since the audience gets to choose the ending of the play, there was a lot of memorization involved in preparing for this performance. Rodgers plays Marjorie, one of the sisters who is described as a ‘conservative banker’, “which is code word for boring,” Rodgers said. The other sisters include Valerie (Hannah Skinner) is described as “a media influencer, valley girl,” and the hippie sister Melanie (Alli Brown).

“We had a team of script writers who wrote different endings for each of the characters, so it’s a lot of memorization for each of us because we have our own endings to memorize and then everyone else’s,” Rodgers said. “But I think we’ve done good work as a cast as a whole to really nail those scenes so that no matter who gets chosen, we’ll know exactly what to do.”

Other characters include the waitress played by Kenia Zarate, and the chef named Franc, played by Dakota Hudson.

Students working the event and who are not in the performance include Camden Hopkin, who is hosting the event, Beth Figenser, Kristinah Serrano, and Grubb. These students will be helping with the banquet and awards portion of the evening.

In addition to the performance, the audience will be able to enjoy a delicious meal of either chicken strips, chicken cordon bleu, or tilapia. The tilapia meals are sold out, however there are still limited tickets left for the other two meals.

“The food will be good. That is a special promise,” Shieve said.

In addition to the awards, the theatre department will also be sharing its plans for next year.

“Along with the awards, along with the dinner, along with the murder-mystery play, we do have some community awards we’ll be giving out recognizing some of our special community members and patrons, and then we will also be announcing our season for next year,” GRHS theatre teacher and director Bradlee Skinner said.

Proceeds from the show will go towards helping the students travel to the International Thespian Festival in Indiana this summer. Those interested in seeing the play and awards banquet can also go without paying for food. Tickets can be purchased at ShowTix4U, or at the door before the event begins. 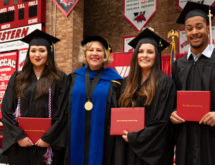